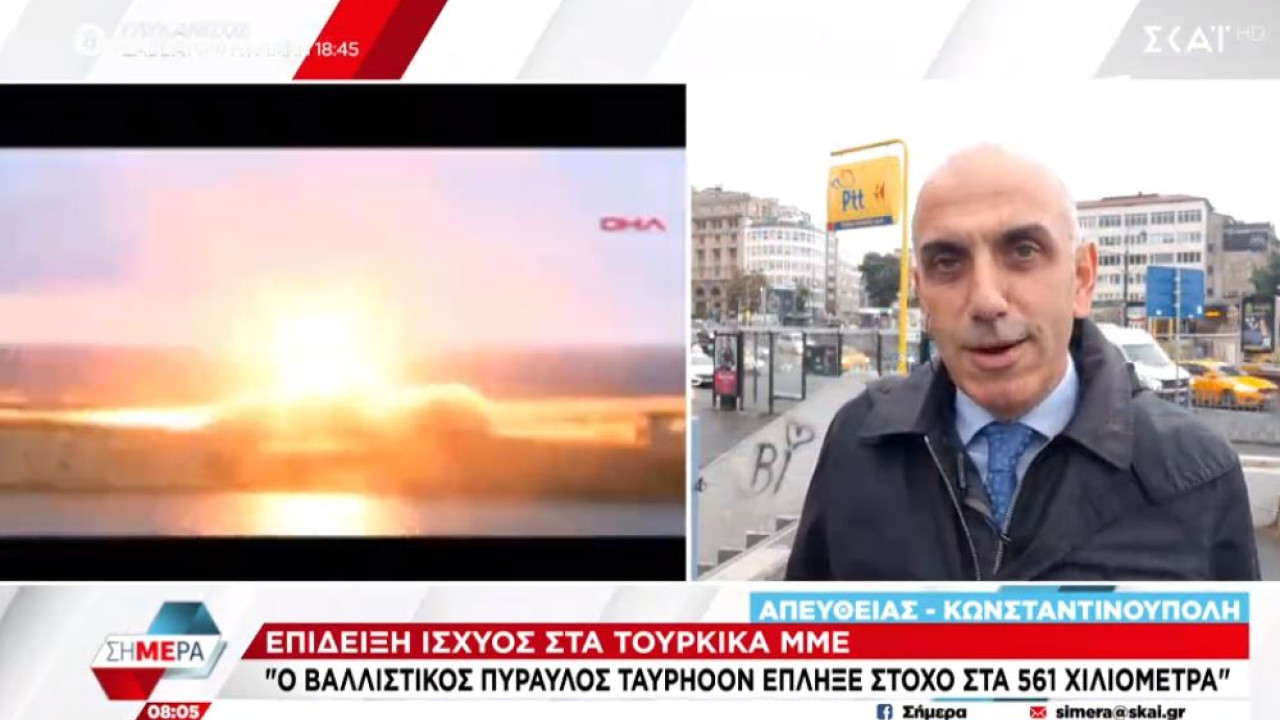 Turkish media: Show of power for the “national missile” Typhoon with threats to Greece

Turkish analysts commented that “with Typhoon we can now hit Athens and all of Greece”.

New challenges and threats against Greece are being launched by Turkey, this time on the occasion of the test launch of the Typhoon ballistic missile.

Turkish analysts, taking the baton of challenges from the country’s political leadership, commented that “with Typhoon we can now hit Athens and all of Greece”.

They were commenting, as SKAI correspondent Manolis Kostidis reports from Istanbul, that “until now we could hit targets on the Greek islands”.

Military analyst Mete Yarar told CNN Turk: “To date the longest range missile system we have has been the Bora. This system has a range of at least 280 kilometers. And when we were discussing the islands, then they raised the Bora issue, because our country had that at a tactical level. Turkey did not have a ballistic missile at its disposal. Today we are talking about the range of a ballistic missile. We are no longer talking about a range of 561 kilometers, we are saying that we hit the target at 561 kilometers. Perhaps it has a greater range.

Journalist Hulki Cevizoglou reported: “I calculated it. The distance between Smyrna and Athens is 411 kilometers.

And Yarar added: “They kept telling us that they will hit our bridges in Istanbul, they will hit all of Istanbul. I would ask you to also measure the distance between Constantinople and Athens”.

The national rocket in its test shot got excellent. Roketsan carried out the test firing as part of the Typhoon ballistic missile development program under the supervision of the Directorate of Defense Industry. The launch took place at Rizunda airport in the area belonging to the Ministry of Defense. “The Typhoon missile hit a target in Sinop and within 458 seconds found its target at a distance of 561 kilometers.”

Turkiye newspaper wrote “All of Greece is within the range of our missile”, while Aksam wrote “launched from Rizunda, hit target in Sinop”.

Yesterday, Turkish Vice President Ibrahim Kalin made the demilitarization of the islands a condition for reducing tension, issuing new threats.

Kalin said: “Yesterday I also said that in my conversation with Sullivan, Biden’s national security adviser. I told him ‘the weapons systems that you give them are taking them to the islands with a demilitarized regime. Have you realized this?. I had said that in our fourth meeting in Istanbul. Warn the Greeks not to use you’.

» He told me that they will take some steps, they are not taking anyone’s side, they are not in favor of tension. Then I said to him ‘don’t allow the Greeks to use you in this way’.

» The source of the tension is Greece. Again, Greece is the one that must take steps to reduce the tension. For example, let’s start by withdrawing weapons, weapon systems, military forces, police forces, from the islands that have a demilitarized status. It doesn’t matter if they are American or European systems.”