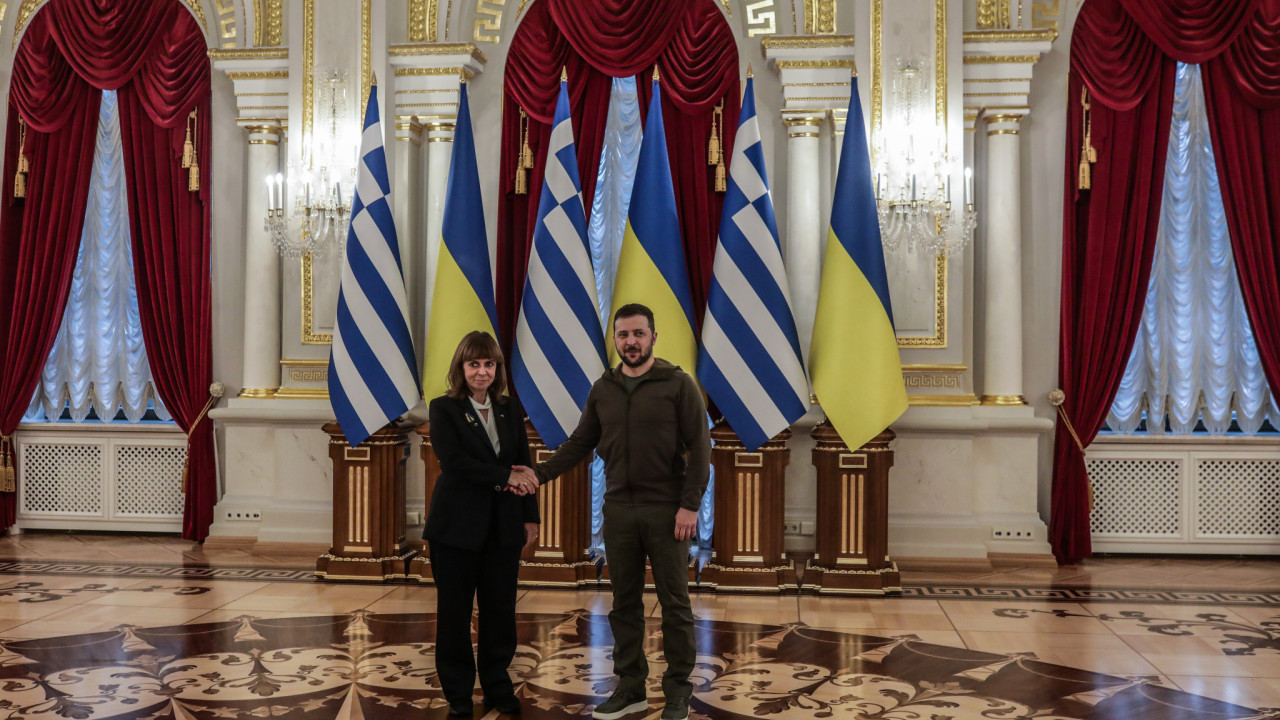 Sakellaropoulou-Zelensky meeting: the invasion of Ukraine is a direct challenge to liberal democracy

“From the beginning we stand unreservedly by your side in your effort to defend the territorial integrity and national sovereignty of your country” said the President of the Republic from Kyiv, at the joint press conference with the Ukrainian president

The President of the Republic Katerina Sakellaropoulou had a one-on-one meeting with her Ukrainian counterpart Volodymyr Zelenskyy in Kyiv. Extended talks between the two delegations followed.

During the joint press conference, Mrs. Sakellaropoulou stated the following:

My presence in Kyiv today declares the undivided support and solidarity of Greece to you and the heroic Ukrainian people, who are already experiencing a severe trial for almost nine months due to the unprovoked and unjustified Russian military invasion and are fighting for their freedom and independence.

The Russian attack on Ukraine concerns us all. With the brutal violation of international law, the threat of a generalized food crisis, which will particularly affect the weakest countries, but also the threat of nuclear destruction, an attempt is being made to overturn the post-war acquis of peace and progress. This is a direct challenge to liberal democracy and European values, and therefore the European Union and the international community must defend security and stability against revisionism.

We stand unreservedly by your side from the beginning in your quest to defend the territorial integrity and national sovereignty of your country, and I assure you that we will continue to do so for as long as it takes. Our position is clear and unwavering: changes to internationally recognized borders through the use of military force and unilateral acts of secession cannot be accepted. We will never recognize her illegal annexation of areas of Ukraine by Russia attempts to impose.

Our two peoples are connected by long historical ties. Greek populations have lived on the shores of the Black Sea for centuries. We will not forget the crimes committed in Mariupol against its innocent and peaceful inhabitants, a city with a Greek name and with a significant population of Greek origin.

But also Kyiv, Odessa, the birthplace of the Greek Revolution, Buka, Irpin, Borodyanka, like the entire country, are subjected to brutal attacks on a daily basis, resulting in the death and injury of unarmed people. I want to condemn in the strongest possible terms the unacceptable Russian attacks aimed at destroying critical urban infrastructure in Ukraine ahead of the coming winter, which constitute war crimes as they target civilians. Greece strongly supports the accountability of those responsible for these crimes.

Despite the significant negative impact on the economy, Greece has supported and is fully implementing all the sanctions packages imposed by the European Union against it of Russia. We unreservedly supported the decision of the European Council to grant Ukraine the status of a candidate country for EU membership. We sent humanitarian aid, as well as defense equipment. We have the port of Alexandroupolis as a hub for Allies wishing to provide assistance to Ukraine. And we immediately responded to the needs of tens of thousands of Ukrainian citizens who sought refuge in our country.

Respect and strict adherence to international law and the inviolability of borders must be restored. And the defense struggle of Ukraine and its people to emerge as a national cause for all the states of the civilized world, but also as a collective obligation towards our values”.

Facebook
Twitter
Pinterest
WhatsApp
Previous article
Warning for dangerous weather phenomena in Crete due to the arrival of bad weather EVA
Next article
In GADA, the arrest warrants for the case of the rape of the 12-year-old- The arrests are a matter of time