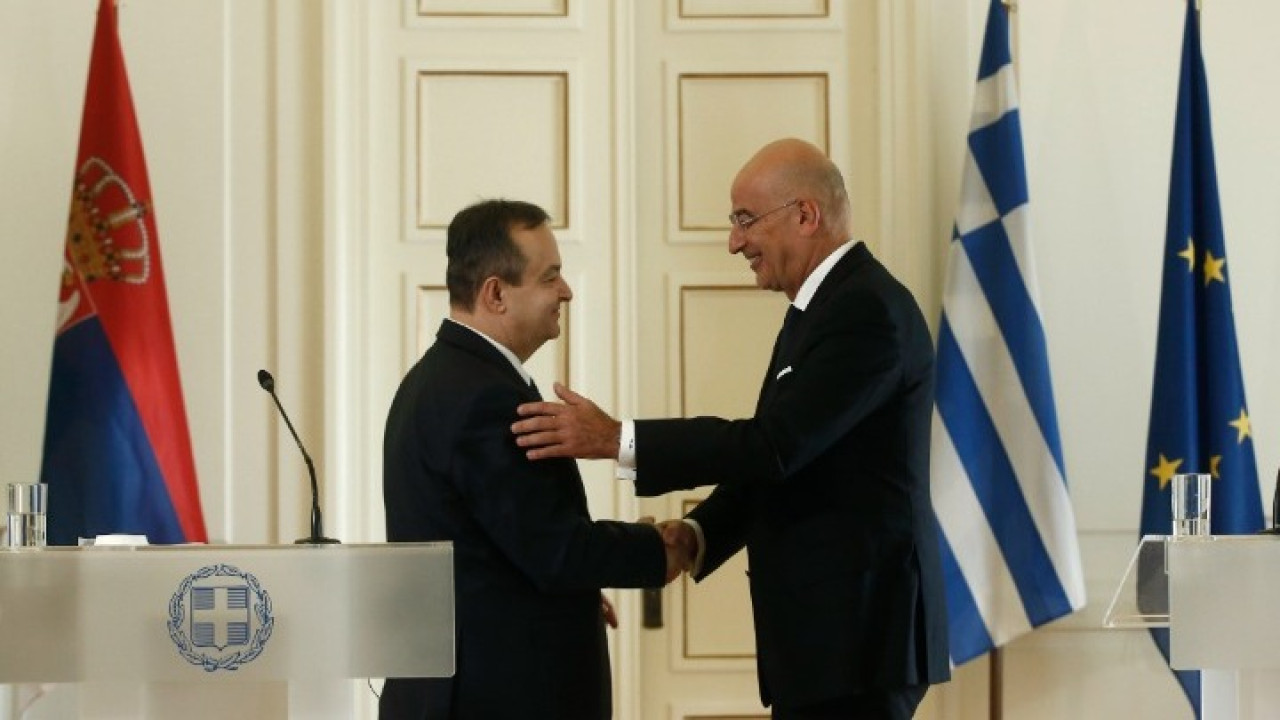 Dendias: It is not Greece that cultivates tension and escalation – Dasic: Count on Serbia’s support

The message that Greece is always, for reasons of principle, in favor of a constructive dialogue with Turkey, but always on the basis of respect for International Law and the International Law of the Sea, with one basic principle, respect for the sovereignty and territorial integrity of all of states, the Minister of Foreign Affairs Nikos Dendias re-broadcasted during the joint statements with his Serbian counterpart Ivica Dasic, after the end of their meeting. “And I know that Serbia also embraces these principles” Nikos Dendias pointed out and thanked the Foreign Minister of Serbia “for the very clear language” he used in his today’s interview with Kathimerini and for the strong support for the territorial integrity of Greece and of Cyprus, at sea, in the air, on the ground. He also underlined that this statement acquires great importance and special weight, because it comes from the foreign minister of a country that has signed the Treaty of Lausanne, the Treaty of Montreux and the Treaty of Paris.

In particular, during the meeting, Nikos Dendias informed the Foreign Minister of Serbia about the continuous challenges facing Greece from Turkey, underlining that it is not Greece that wishes or fosters tension and escalation. In fact, the Minister of Foreign Affairs made a special reference to the challenges facing the Western Balkan region today, such as destabilization, revisionist narratives. “Revisionist forces exist and are active in the Balkans, even at a time when the attention of the international community is focused on Ukraine. There are many forces that would like Serbia not to be a part of the European family, not to become a member of the EU,” he underlined.

In this light, the Foreign Minister announced that Greece strongly supports and will help Serbia on its European path, as well as that it is ready to provide all technical assistance. He pointed out that Serbia is a very important state in the Balkans to be left out of the common European family.

Nikos Dendias congratulated Ivica Dasic on his recent assumption of the duties of the Minister of Foreign Affairs of Serbia and emphasized the fact that he chose Athens as the first capital he visits. “Your move today has a symbolic character” he pointed out.

Focusing on bilateral relations, the Foreign Minister emphasized that Greece attaches particular importance to its relations with Serbia and stressed that the ties between the two countries are extremely strong.

Regarding the meeting, he said that they discussed the prospects for the development of bilateral relations in the economy, energy, culture, defense, the upcoming convocation of the Fourth Supreme Cooperation Council and the “very important Greek economic presence in Serbia”, having create thousands of jobs. In this context, he expressed Greece’s will to develop its investment presence in Serbia.

They also discussed energy security and in particular the need to create sources of energy supply for Serbia. In addition, Nikos Dendias noticed that there is a great European interest in the creation of communication axes, rail and road, between the EU and Serbia, ending in Greece.

In fact, he stated that very soon he will visit Serbia once more to confirm that bilateral ties are lost in the background of history. “We fought together under difficult conditions in two Balkan wars and two world wars,” he noted.

Regarding the Belgrade-Pristina Dialogue, the Foreign Minister stated that Greece supports the achievement of a political compromise solution, in accordance with International Law and the resolutions of the UN Security Council. Furthermore, he noted that for progress to be made any unilateral decision must take place within the agreed framework of the Dialogue and moves that could jeopardize the very fragile balance that has been achieved should be avoided.

Ivica Dasic: Greece can count on Serbia’s support for sovereignty and territorial integrity

Ivica Dasic began his statements with reference to his personal choice, as he said, for Greece to be the first country he visits as Foreign Minister. Between the two countries, between the two peoples, there are historic traditional alliances and our most important historical figures fought for freedom, the Serbian Foreign Minister said. This, he added, can also be seen in Belgrade, where some streets bear the names of these personalities, such as Rigas Feraios and Venizelos, but also in the center of Athens with Karageorgis Servias Street.

The Serbian Foreign Minister referred to the shared historical ties between the two countries and expressed his country’s will to develop “good bilateral relations”. He also thanked the Greek people for their great support regarding the NATO bombings and confided that he will not forget the gathering at the Syntagma led by Mikis Theodorakis.

At the same time, the Serbian foreign minister stated that “we expect from our friends, from Greece, that it will not change its position regarding the territorial integrity of Serbia” and stated that his country wants a political solution to the problem with Pristina . “Until this Dialogue does not produce the appropriate results, any recognition of Kosovo, or its acceptance in international organizations is considered to be a violation of the territorial integrity and sovereignty of Serbia.” In particular, he said that Serbia supports the Brussels Agreement, wants a political solution through a dialogue, but cannot consider that this solution is now a given.

Furthermore, he thanked Greece for the support it provides regarding Serbia’s European perspective, but also Serbia’s territorial sovereignty.

Finally, he welcomed the upcoming visit of the President of the Republic to Serbia, the tripartite and quadripartite partnerships.

After the press conference, Nikos Dendias hosted a working lunch for his Serbian counterpart.

Facebook
Twitter
Pinterest
WhatsApp
Previous article
Corona virus: 61,139 cases, 134 deaths and 89 intubated in one week
Next article
TCU Minister anticipates that he will not issue a precautionary measure to suspend Petrobras’ dividends