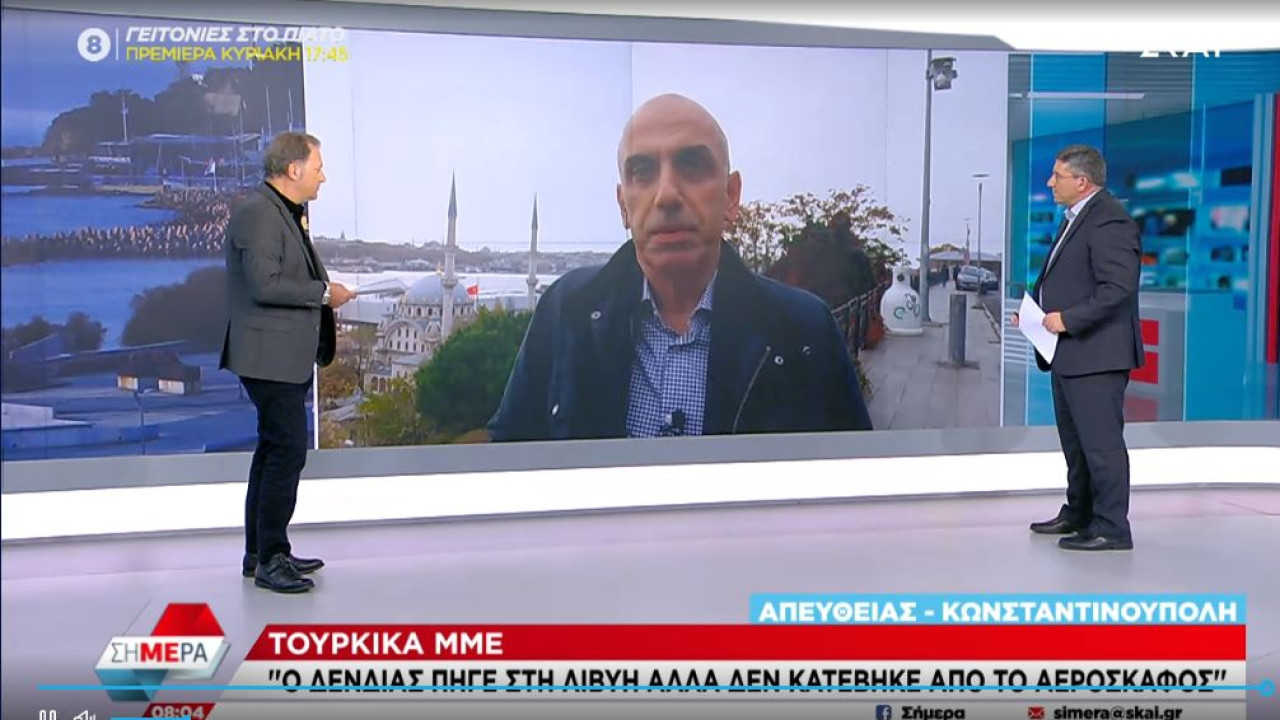 Ironies from Turkish media: Dendias went to Libya, but did not get off the plane

Turkish media, as broadcast from Istanbul by Manolis Kostidis, report with a dose of irony: “Dendias went to Libya, but did not get off the plane” – “The reason for Athens’ anger is Libya’s relations with Turkey”.

In Turkey’s relations with Libya, the Turkish media attribute the “anger” – as they say – of Athens for diplomatic trap that Tripoli set yesterday for the Minister of Foreign Affairs, Nikos Dendias.

Turkish media, as the SKAI correspondent broadcasts from Istanbul, Manolis Kostidistarget the Greek foreign minister and report: “Dendias went to Libya, but did not get off the plane” – “The reason for Athens’ anger is Libya’s relations with Turkey”.

Specifically, the Hurriyet states that “Dendia’s stubbornness created the crisis”, while the Yeni Safak states that “the name of the crisis is Dendias”.

The TV network Haber Global noted: “The Minister of Foreign Affairs of Greece, Nikos Dendias, started his visit to Libya episodically. The Greek foreign minister went to Tripoli, but did not get off the plane.

» The foreign minister of Libya Najla Mangous went to the airport to welcome Dendias. But, at the last moment Dendias chose not to get off the plane and ordered the pilot to take off and without making any announcement went to Benghazi”.

The TV network TGRT HABER reported: “This matter in Libya is a diplomatic scandal. But at the root of the issue is Turkey. Because Turkey and Libya have signed an agreement defining maritime areas of responsibility. This deal is legal. Athens’ anger over the agreement between Turkey and Libya has now reached the point of abolishing the rules of civility.”

Cavusoglu: “The Turkish spring has begun”

Attack against the US and the EU launched by the Minister of Foreign Affairs of Turkey, Mevlüt Çavuşoğlusaying “they have no right to make suggestions to us”.

In addition, he said that “the Turkish century has begun, the Turkish spring has begun” and accused Greece and Greek Cypriots of violations.

Turkey’s foreign minister said: “What right does the EU have to interfere with the Organization of Turkish States? Our message to the USA is as follows: You have upset the balance in Turkey-Greece relations and in Cyprus, upset the balance. Be balanced. And if you are talking about international law, look at the violations by Greece and the Greek Cypriot side. Also, we are not going to get a license from the US. The ‘Turkish century’ has begun. The ‘Turkish Spring’ has begun.”

Continuing, he called on the US and the EU to stop “threats and bullies”.

Cavusoglu said in detail: “On the other hand, we also saw that the US, especially the EU, put pressure on the members of the Organization of Turkish States. We even saw them threaten. They applied very serious pressure. They gave NOTA to every country. They sent letters. They pressed. But let them not forget this: There is a Turkish world that does not succumb to such threats, no matter who it is, be it the EU or the US. The unity of the Turkish world is not against anyone.

» Put aside threats and naysayers. These no longer pass for the Turkish world. Your threats didn’t work either. The necessary steps have been taken. This is a start. Step by step, Allah first, more will come.”