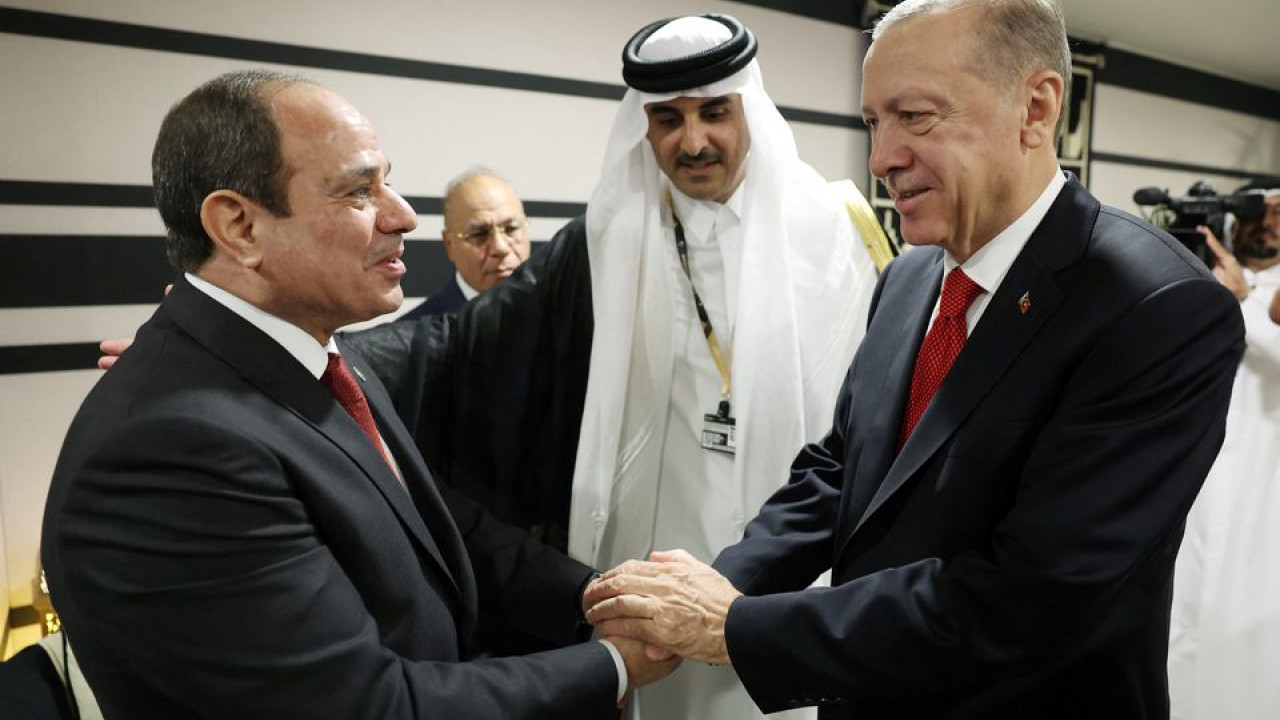 The Egyptian newspaper points out what separates Ankara – Cairo, demonstrating that it will take many concessions on the part of Turkey, especially in Libya, to “rebuild” the bridges

In the efforts of the Turkish president for rapprochement with Egypt Egyptian newspaper Al Ahram reported in a key article published on its website, titled “Turkish media: Erdogan declares himself willing to end the rift with Egypt, to avoid problems in the Mediterranean”.

Turkey’s president said he would meet with his Egyptian counterpart Abdel Fattah Al Sheeshj, after the two leaders shook hands earlier this month at the FIFA World Cup in Qatar. “The process with Egypt has started,” Erdogan said in a taped interview, according to Haberturk TV Sunday. “After talks at ministerial level, we will meet together.”

In an interview, Erdogan stated that “just as Turkey’s relations with Egypt have begun to improve, this may also happen in our relationship with Syria.”
“There is no room for a permanent rift in politics,” he said.

The Turkish president took aim at Greece, saying “there were some who wanted to take advantage of the rift between Turkey and the Gulf countries at a certain period, but their plans failed when we ended this rift.”

However, the Egyptian newspaper, in its report yesterday, also points out what separates the two sides, demonstrating that it will take many concessions on Turkey’s part, especially in Libya, to “rebuild” the bridges and end the “rift” as Erdogan calls it:

“Last year, Cairo and Ankara held two rounds of exploratory talks – led by the deputy foreign ministers of Egypt and Turkey – to mend ties severed over Ankara’s support for the Muslim Brotherhood, which Egypt considers a terrorist organization.

»However, in October this year, Egyptian Foreign Minister Sameh Shoukry said that dialogue between Egypt and Turkey on normalizing relations had stalled due to Turkish actions in Libya.

»Tensions between Egypt and Turkey resurfaced in early October after Turkey signed a series of preliminary economic agreements with the Tripoli-based Government of National Unity (GNU) of Libya to explore for hydrocarbons in Libyan waters in the Mediterranean.

“Egypt has rejected these agreements between Ankara and Tripoli, saying that the GNU’s mandate has expired and that it is not authorized to sign such agreements.

»Cairo has also reject previous agreements maritime demarcation agreements signed between Ankara and a previous government in Tripoli as violations of international law.

»Egypt has also discard recent ones Turkish efforts to explore natural gas in areas in the eastern Mediterranean that Cairo recognizes as part of Cypriot and Greek waters”.