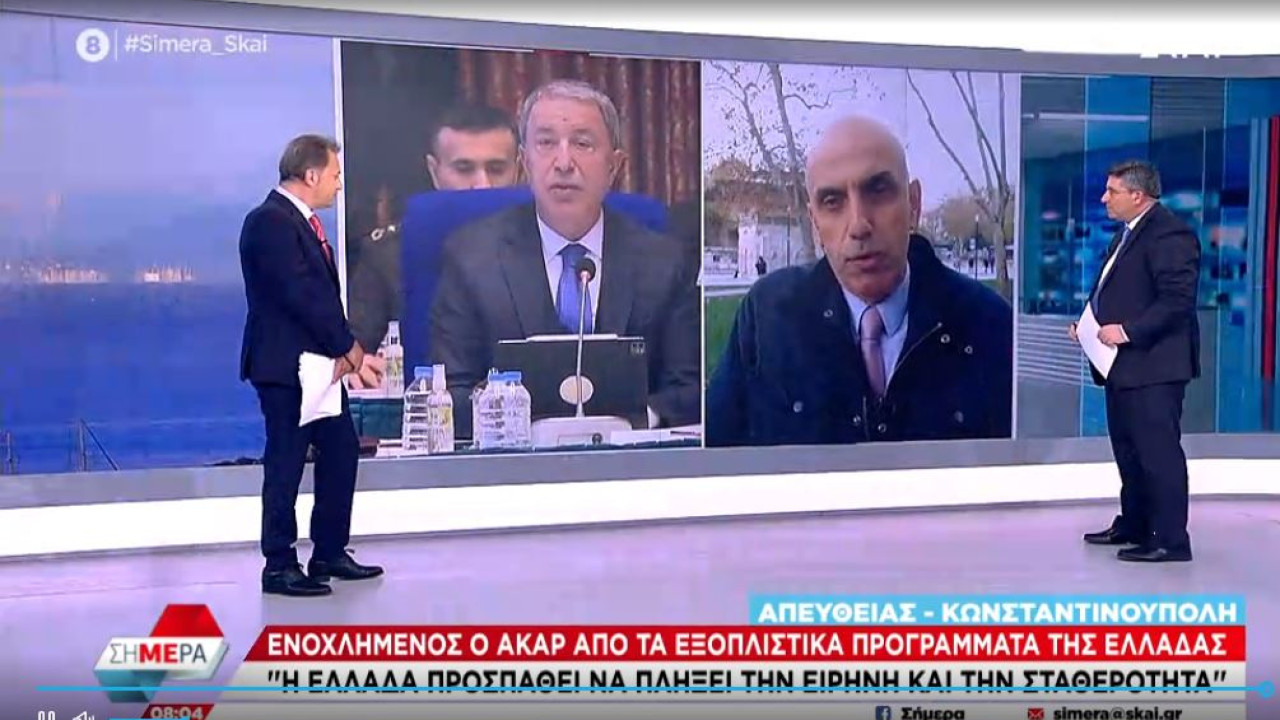 The Minister of Defense of Turkey, Hulusi Akar, appeared disturbed by Greece’s weapons programs, who stated that “Greece with weapons is trying to harm peace and stability”.

According to what the SKAI correspondent in Istanbul reported, Manolis KostidisAkar – speaking yesterday at an event of Turkish Cypriots – stated:

“We are in favor of the peaceful resolution of the problems between Greece and Turkey. But we will not allow our rights to be trampled on, as well as those of our Cypriot brothers, and everyone should know that we will not allow anything to be done.

In an inexplicable way, our Greek neighbors, especially certain politicians and this I must emphasize, with a lust for weapons programs are trying to do everything to harm the peace and stability between the two countries. We are in favor of dialogue but we will not allow our rights to be violated.”

The Turkish media are in a frenzy over the statements of Kyriakos Mitsotakis from London. The Turkish newspaper Hurriyet reported that the Greek prime minister “crossed the line” and referred to “Mitsotakis’s scandalous statements”.

Also, the Turkish media reported that “Greece is moving against the Turkish-Libyan memorandum” and that “it will conduct investigations inside the Libyan region”.

Haber Global TV reported: “Greece has extended Naxtex for the seismic surveys it had issued on November 8. The area expanded to 11,000 sq.km. This development may provoke the reaction of Turkey and Libya. Because the area where the investigations will be carried out violates the Turkey-Libya memorandum concerning the maritime areas of responsibility which they signed in 2019. The area of ​​the investigations is located within the area belonging to Libya. Greece does not recognize the Turkish-Libyan memorandum”.

Commenting on the rally in Istanbul stadium with the big banner and love song dedicated to Erdogan by his fans, Imamoglu stated that “Erdogan used to gather millions of people, now he gathers 25,000 people and talks about a big gathering”.

Imamoglu said: “The president knows better, he once held big rallies here in the city that gathered 1 to 1.5 million people. Some newspapers said 2 to 2.5 million! But now they have gathered 25,000 people and are trying to present it as a big gathering, a huge meeting, etc. As the president says, where did it start and where has it ended”.

Facebook
Twitter
Pinterest
WhatsApp
Previous article
Larissa: The crayfish have returned to Pinios – video
Next article
Thessaloniki: To the prosecutor the 4 arrested in the occupation – Protest gathering in the courts