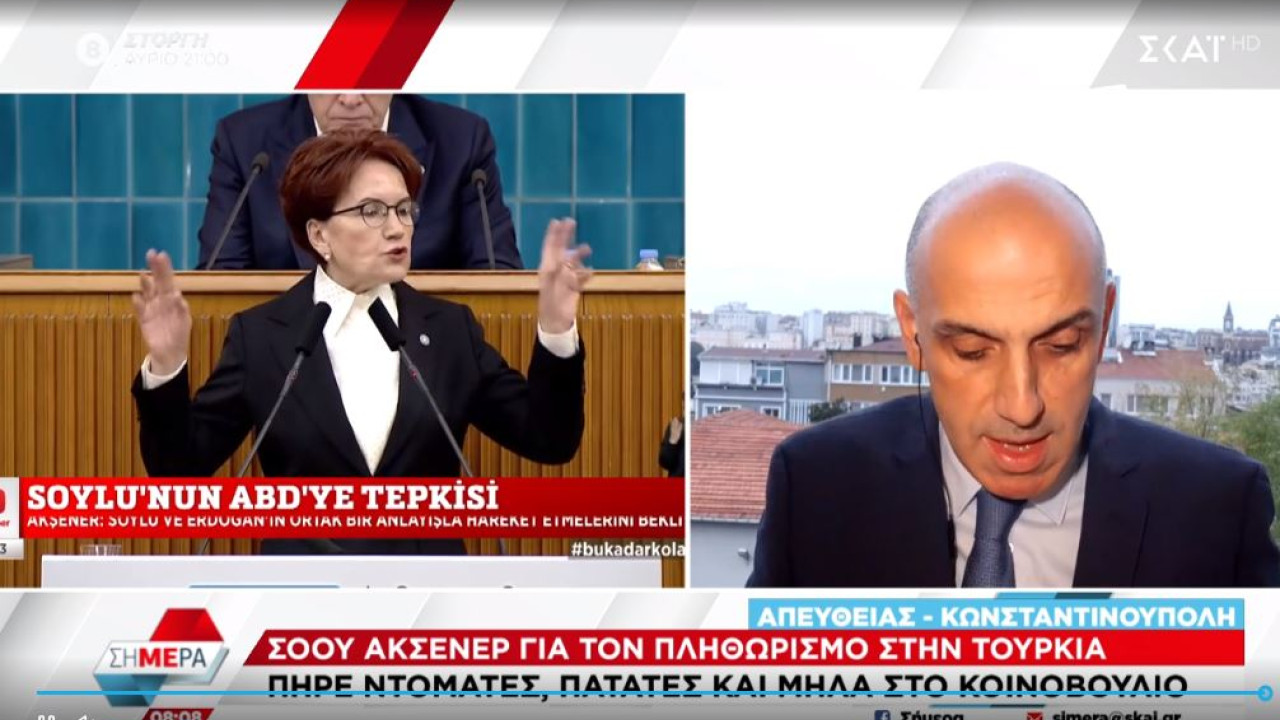 The problem of inflation was highlighted with a small show in the Turkish Parliament by the president of the Good Party, Meral Aksener – “Mr. Erdogan, how much the palace has changed you”

The prices on the supermarket shelves are causing a shock in Turkey, with many citizens worried about whether they will be able to fill their baskets.

As the SKAI correspondent, Manolis Kostidis, reported from Istanbul, the problem was highlighted with a small show in the Turkish Parliament by the president of the Good Party, Meral Aksener.

Wanting to highlight the problem of inflation in the country, he took tomatoes, potatoes and apples into the Parliament.

He pointed out that increases in basic food in Turkey reach up to 247%.

“Mr. Erdogan, how much the palace has changed you,” Aksener said and added: “You have forgotten what it means to be hungry.”

Some children sleep fasted. Their mothers, because they cannot give them some food or cook something for them in the evenings, cry. Mr. Erdogan, what’s wrong with you? How much the palace has changed you.”

Strict message from the US Secretary of Defense, Lloyd Austinto the Turkish Defense Minister, Hulusi Akar.

“The US is strongly opposed to any ground operation in Syria,” Austin told Akar and called for an end to the airstrikes “because our soldiers are at risk.”

In detail, US Defense Secretary Lloyd Austin expressed to his Turkish counterpart Hulusi Akar his “strong opposition” to a new large-scale Turkish ground operation in Syria, expressing concern over the recent escalation of violence in the border region, according to a release Press published by his services.

During a telephone conversation with his counterpart, Mr. Austin also expressed his condolences to the victims of the November 13 terrorist attack in the heart of Istanbul, according to the US Pentagon statement.

He also “expressed concern about the escalating action in northern Syria,” particularly “recent airstrikes” by Turkey, “some of which have directly threatened the safety of U.S. (military) personnel working with local partners in Syria to IS defeated” (s.s. the jihadist organization Islamic State).

The US Secretary of Defense called for “de-escalation” and added that he “shares the strong opposition of the State Department” to the possibility of starting a new large-scale ground operation of the Turkish army in Syria.

Facebook
Twitter
Pinterest
WhatsApp
Previous article
Refundable deposit: Extension of submission of supporting documents until 12/30
Next article
Meghan Markle: Farewell to her listeners with a verse from a poem by Dinos Christianopoulos