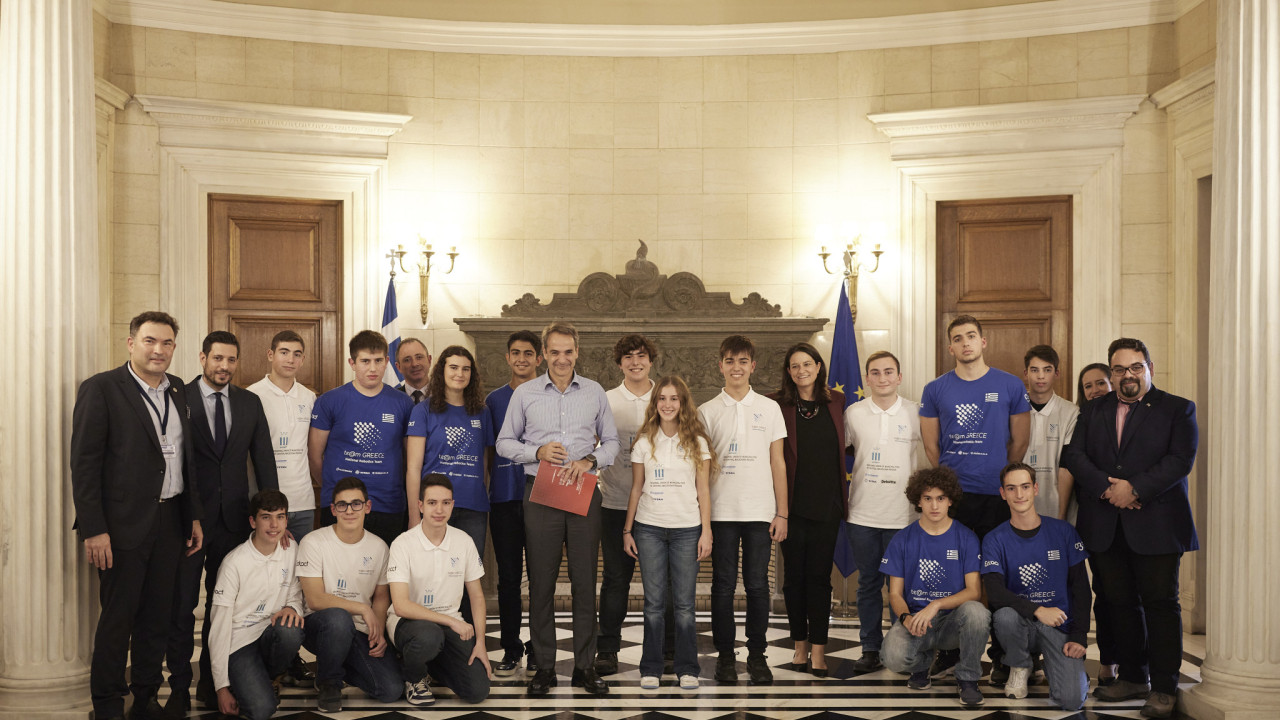 The Greek participation in the XPRIZE Innovator category was a proposal to reduce the energy consumption required for heating and cooling hotel facilities.

In the afternoon, Prime Minister Kyriakos Mitsotakis welcomed the National Student Robotics Team, which won a gold and a bronze medal at this year’s Robotics Olympiad “FIRST Global Challenge”, organized in October in Switzerland, at Megaros Maximos.

The Prime Minister congratulated the members of the Team and their coaches, asked them about their experiences in the international competition and about their ambitions and aspirations. He highlighted the importance of familiarizing with new technologies and cultivating digital skills from a young age, but also encouraging students to explore practical or innovative applications of the know-how they acquire, while encouraging young scientists to visit schools and encourage young children to engage with robotics.

“Just the idea that you could go into schools and talk about your own experience and be a mentor to the younger kids, in elementary school, who in 10 years will hopefully be where you are, means a lot.” , said Kyriakos Mitsotakis.

The teaching of robotics has now been integrated into the compulsory school curriculum as early as kindergarten, through the Skills Workshops, while Greece has included in the National Recovery and Competitiveness Plan the supply of approximately 177,000 robotics educational sets to better equip school units.

The students, who come from public and private schools, spoke to the Prime Minister about the preparation required and about the projects they designed and presented at the Olympiad, in which teams from more than 180 countries took part.

The Greek participation in the XPRIZE Innovator category was a proposal to reduce the energy consumption required for heating and cooling hotel facilities.

It is based on the use of pumps and allows storing more energy in the same volume. The Greek design is combined with special software for optimal electricity consumption. The whole system contributes to reducing the environmental footprint.

“I’m really impressed by how advanced the product is that you’ve built,” the Prime Minister said.

The children noted that their invention has attracted interest for commercial exploitation from the private sector, and the Prime Minister encouraged the students to patent their invention, adding that in Greece recently there has been a doubling of patents.

The students also presented to Kyriakos Mitsotakis the process by which they designed and built the robot “Aeolos”. The documented and detailed description of the construction and the code used earned the Greek team first place in the Katherine Johnson Award for Engineering Documentation category. They also asked for the support of the Prime Minister and the government to claim the organization of an Olympiad or a robotics world championship in the coming years, with Kyriakos Mitsotakis stressing that he will help achieve this goal.

The Group was formed on the initiative of the Educational Organization Eduact, which is the Competent Body and National Organizer for Greece, Cyprus and the Balkan countries. The Group, as well as the Eduact organization, have the support of companies such as TITAN, Kleeman, Hellas Gold, Deloitte, AEGEAS AMKE, Accenture, Hellenic Petroleum, etc. and the US Embassy in Greece.

Eduact’s training program has been implemented in the framework of the Skills Workshops, both in the pilot and in the generalized implementation of the action.

The Minister of Education and Religious Affairs Niki Kerameos and the ND MP Konstantinos Kyranakis also took part in the meeting.