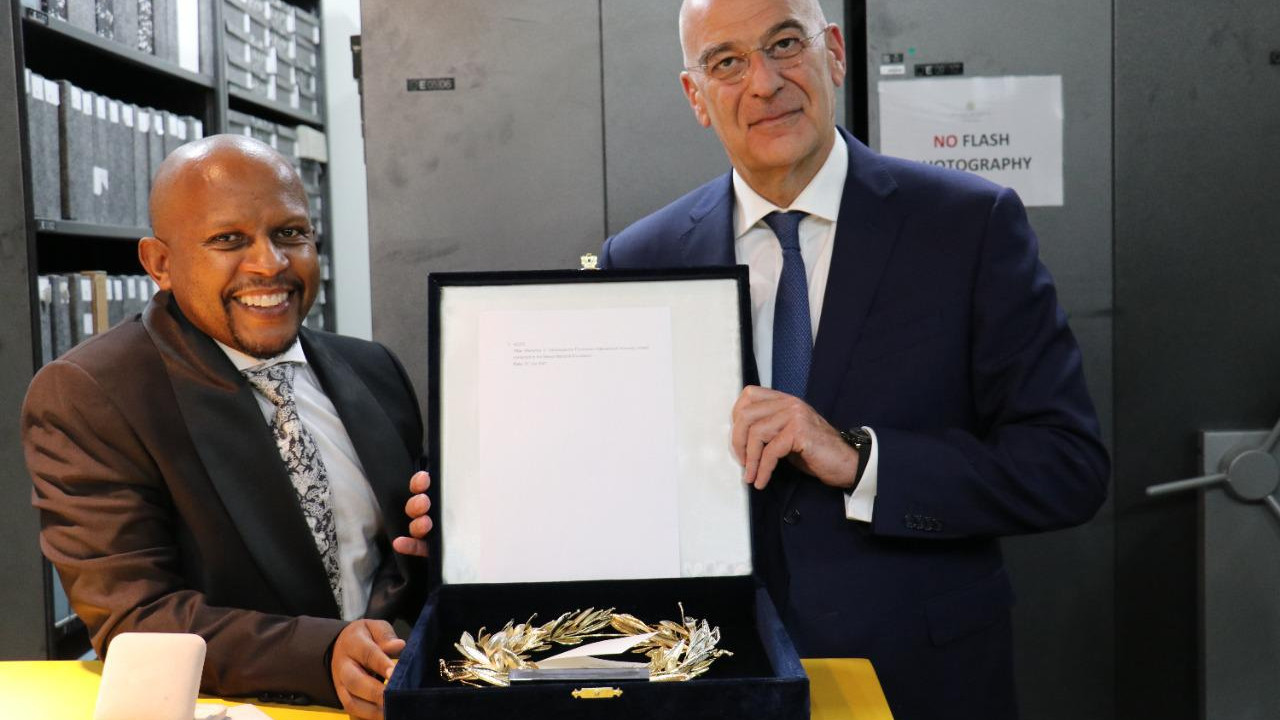 Dendias visit to the Nelson Mandela Foundation, the Greek sports club “Corinthians” and a Greek school in South Africa

During his visit to Johannesburg the foreign minister Nikos Dendias visited it Nelson Mandela Foundation and the Greek historical sports club “Corinthians”the Greek school SAHETI, while he also met with members of the Federation of Greek Communities of South Africa.

In more detail, during his visit to the Nelson Mandela Foundation, Nikos Dendias was guided around the premises of the foundation and the rich collection of objects related to the work and life of Nelson Mandela, many of them of Greek interest, as pointed out in his post on Twitter Foreign Minister.

He also visited the historical Greek sports club “Corinthians”, where he talked to young sportsmen and women.

Earlier, the Foreign Minister met with the members of the Federation of Greek Communities of South Africa. “I had the opportunity to tell them how proud Greece is that our expatriates have managed to flourish all these years, through difficult circumstances. I thank them from the bottom of my heart for the welcome,” he says in another post. “The fact that you feel part of greater Hellenism is important to us”, he emphasized and added: “It proves in the clearest way that Hellenism is much wider and much bigger than the narrow geographical boundaries of the Greek state. And that we always turn to this greater Hellenism, bearer of our traditions, our ethos, our identity in this world”.

As part of the visit to Johannesburg, the Greek school SAHETI was also visited, in the presence of the Metropolitan of Ioannina and Pretoria, Damascenes. “Whoever participates in Greek education, participates in the Greek ethos, in fact in the world ethos”, the minister emphasized during his visit. As Mr. Dendias mentioned, it is “a school known in Greece as one of the best Greek educational institutions in the world”, while he expressed his emotion, as he noticed children proudly wearing traditional Greek costumes and, indeed, of their particular homeland , of Corfu.

It is noted that in Pretoria, Nikos Dendias met with his South African counterpart, Naledi Pandor. “Greece has a growing and active interest in Africa. We would like to strengthen our relations with South Africa, one of the most important countries on the continent,” he said at the start of the meeting with the South African foreign minister.

In fact, the foreign minister’s visit to South Africa was an opportunity to thank the country for the support it provides to Greece for its election to the Security Council, but also to ask for help for a number of Sub-Saharan African countries from which it also claims vote, as he pointed out in his statement to journalists in the context of his visit there. He pointed out that today’s visit to South Africa was the first visit by a Greek foreign minister after 25 years. He pointed out that South Africa is a very important country, the 2nd largest economy on the African continent, but also a country with great influence in the wider region.

Greece is close, it remains for everyone a willing homeland and a homeland that cares for Hellenism beyond the borders, assured the Minister of Foreign Affairs, Nikos Dendias, in his message to the Greek Community that he delivered on the Greek radio station “New Panhellenic Voice”. , as part of his visit to Johannesburg. In his message, Nikos Dendias said he was moved to address today the frequency of the Greek radio station to the Greek women and men of South Africa and expressed his special joy that the expatriates are interfering. In fact, he underlined that the Greek Diaspora is an important connecting link between Greece and South Africa.

He made special reference to his visits to the SAHETI Greek school in Johannesburg, in the presence of the Metropolitan of Ioannina and Pretoria Damascus, and to the Greek historical sports club “Corinthians”, as well as to his meeting with members of the Federation of Greek Communities of South Africa. He also emphasized that he had the opportunity to see the pulse, the energy of Johannesburg’s Hellenism. “Hellenism that honors the homeland, respects traditions, spreads the basic values ​​of our culture. And, of course, I was moved by reading ‘Gnothi sauton’ in SAHETI’s Thyreo. I saw with emotion children at school wearing traditional Greek costumes with pride, dancing dances of my hometown of Corfu” he said characteristically.

Also, the foreign minister underlined the importance of maintaining close contact with the homeland. Especially in this period when Greece faces significant challenges from an aggressor neighbor, we all know it, who regularly threatens us, even regarding our inalienable rights, who increases his claims, who sharpens his rhetoric. “Our country responds to all this with calmness, with self-confidence, with a sincere desire for dialogue. But, at the same time shielding its defense and strengthening its alliances. Therefore, we activate all our forces at home and abroad, in the common struggle of our country”.

In this context, he thanked all those who closely follow the developments in Greece, and make known the Greek positions and “defend our rights”.

Concluding his message, he noted that in recent years the country has made leaps of progress, becoming attractive as a place of study, work, residence, investment. During his visit to the Greek radio station “New Panhellenic Voice”, Nikos Dendias was given a tour of its facilities.

Tomorrow, Wednesday, Mr. Dendias will visit Mozambique, making the first visit of a Greek foreign minister to the country. During his stay in Maputo, the foreign minister is expected to meet with his counterpart Verónica Macamo. After the end of the meeting, a Memorandum of Understanding is scheduled to be signed for political consultations.

Afterwards, he is expected to be received by the Prime Minister of the country, Adriano Afonso Maleiane. This will be followed by meetings with the Minister of Transport and Communications Mateus Magala, the Metropolitan of Zambia and Bishop of the Holy Diocese of Mozambique Mr. Ioannis, with members of the Greek Community of Maputo, as well as with the Secretary General of Youth and Employment Oswaldo Petersburg ).