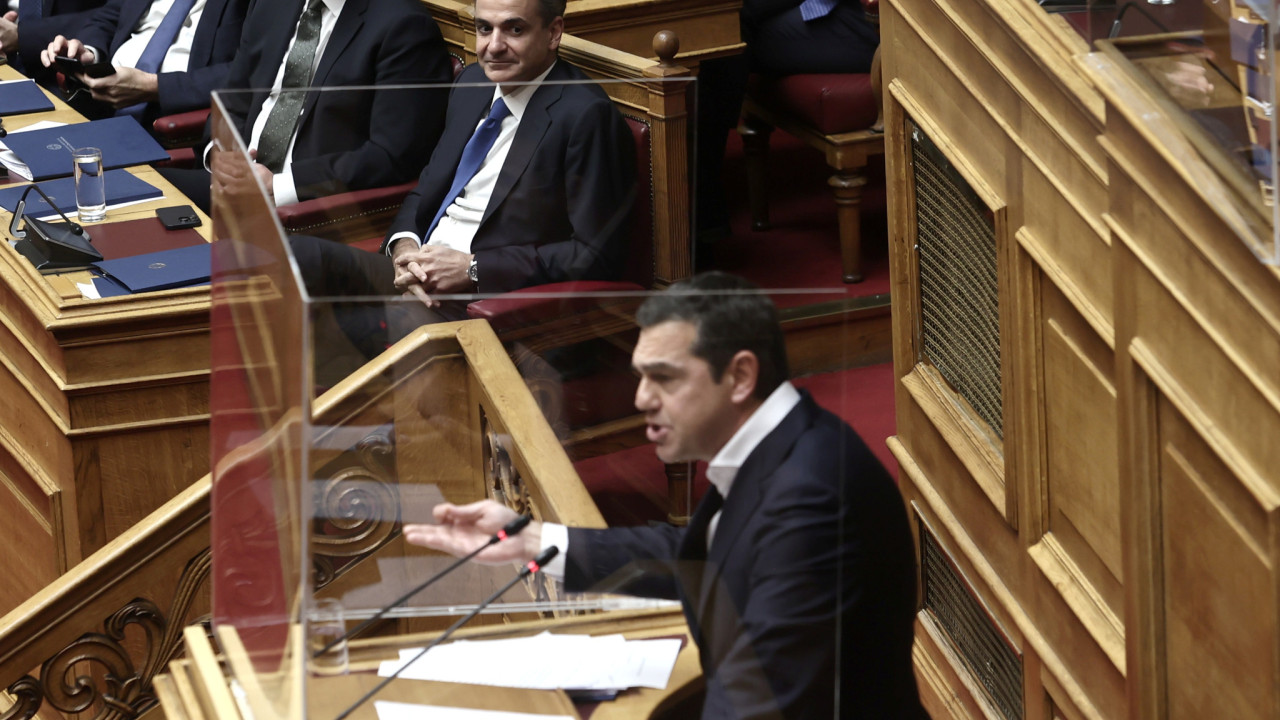 Battle in the Parliament: The government is “ready for war” – Will SYRIZA dare the motion of no confidence?

According to information, the government intends, if a motion of no confidence is submitted by SYRIZA, to start the parliamentary debate immediately, even though the prime minister is scheduled to be in Crete today and tomorrow, where he will tour

The Plenary Session of the Parliament is expected to turn into a battleground today with the government being ready for all possible moves by Alexis Tsipras, who is estimated to attempt to unfold the third “act” of his moves now in the Parliament, after the visit to ADAE and yesterday afternoon at the Presidency of the Republic and may confirm the rumors about filing a motion of no confidence against the government.

“With the delirium of Mr. Tsipras outside the Presidential Palace, the scheme that has been going on for months now has been completed,” commented the government representative, clearly linking the movements of the official opposition leader to the case of surveillance and its exploitation by dirty networks, such as they have been complaining to government officials for a long time

Government sources, referring to the possibility of Alexis Tsipras using the parliamentary “tool” of the motion of no confidence, estimated that “it will confirm his embarrassment in the face of the political associations that are forming” and as they commented, it will be a desperate attempt to overturn these associations.

The “desperation” in fact shows even greater, when this move is also judged in terms of the time it will be sought, just before the upcoming elections, offering “easily” at the given moment the maximum possible rally to the ruling party and its voters and polarizing years further the political scene.

In this context, such a move by Alexis Tsipras is welcomed by the Maximos Palace, as, among other things, it will be an opportunity in a live broadcast from the Parliament for three days to make an analytical comparison of the ND government with that of the SYRIZA government of the period 2015-2019.

“Let him dare to make a motion of censure against the government. We will discuss everything there. Everything!” emphasized the government representative after the statements of Alexis Tsipras outside the Presidential Palace and added “How was Greece with Mr. Tsipras as prime minister and how it is today. The rule of law that in its days was left in the hands of witnesses like “Maximo Sarafi” who was arrested today for fraud. The affidavits about bags of money that went to SYRIZA coffers. A2 and the Cypriot offshores . The deplorables for the supposedly dead Maria. All this and much more. So we wait,” concluded Yiannis Oikonomou.

According to information, the government intends, if a motion of no confidence is submitted by SYRIZA, to start the parliamentary debate immediately, even though the prime minister has planned to be in Crete today and tomorrow, where he will tour. However, his absence will not affect the start of the procedure as the Prime Minister’s presence in the Parliament is not required.

ADAE president Christos Rammos is not missing from the government’s target either, considering that he has been in direct consultation with Koumoundourou for a long time and acts as a “monitor” of Alexis Tsipras.

This view of the government was reinforced, according to government officials, by yesterday’s initiative of Mr. Rammos to send a letter to the Speaker of the Parliament, the political leaders and the Minister of Justice regarding the wiretapping case, which was the last straw previously held by the government, now speaking of “a strange privileged relationship between SYRIZA and the President of ADAE”.

In fact, in a statement issued by the government representative, there is talk of a violation of laws on the part of the president of ADAE for creating impressions and photographing “virtuous cooperation” with SYRIZA.

“In violation of a clear provision of the law, he turned to the mobile phone providers to check for any declassifications, although the ADAE maintains in its files a complete file of the orders of the prosecutor and could do a simple cross-check. The motive, apparently, was creating impressions and his action was applauded by SYRIZA. In fact, the opinion of the Prosecutor of the Supreme Court was defiantly ignored, although according to the Constitution the administration as a whole is subject to judicial function”.

Then there is a reference to the efforts of the president of ADAE to appear unsolicited” at the Institutions and Transparency committee of the Parliament which was “embraced by SYRIZA” as commented by Yiannis Oikonomou and added that at the same time “although requests were submitted to the Parliament, there was frequent communication with executives and the Leader of SYRIZA, “depositions” in European institutions and articles” while no communication with the Prime Minister was ever sought, for almost four years.

“Isn’t it normal, if someone thinks that there is – if he thought that there is – a question of constitutional violation, to include the Prime Minister among his interlocutors, in order to make him public?” said Yiannis Oikonomou.

Movements that Megaro Maximos considers may be aimed at the fact that Mr. Rammos will become a political factor in a sensitive period”.

All this, according to government officials, took on an even greater dimension and then the sequence of actions of Alexis Tsipras with the visit of the President of SYRIZA to ADAE and the file he received, the visit in the afternoon to the Presidency of the Republic and his attempt to implicate the President in a “partisan scheme”.

Facebook
Twitter
Pinterest
WhatsApp
Previous article
SYRIZA: “On the table” the motion of no confidence against the government
Next article
New Turkish obstacles to Sweden-Finland joining NATO