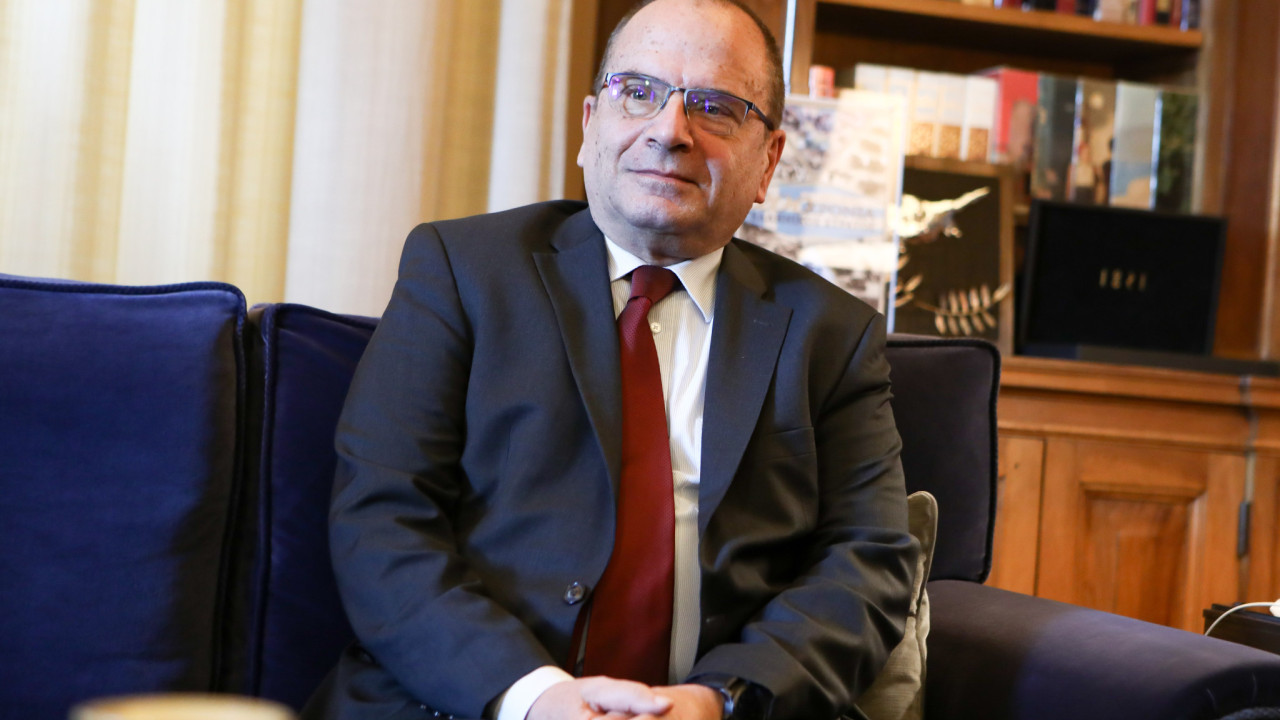 Rammos: I did not initiate the meeting with Tsipras – The prime minister never asked to meet me

With his announcement, the president of ADAE responds to the government representative Yiannis Oikonomou

To the government representative Yannis Economou the ADAE president responds with a lengthy personal announcement, Christos Rammos. In his announcement, he emphasizes that he did not initiate the meetings with the president of SYRIZA, Alexis Tsipras, and at the same time maintains that the prime minister never asked to meet him given that he had regular communication with the relevant minister George Gerapetritis. At the same time, Mr. Rammos characterizes as “deeply offensive” what is mentioned in the announcement of the government representative about the political ambitions of the president of the independent Authority. The full text of Mr. Rammos’ statement follows:

With all due respect to Mr. Government Representative, in order to restore the truth I must note the following:

1. The initiative for the meetings with Mr. Leader of the Official Opposition and president of SYRIZA, I never took it. Whenever he visited ADAE, it was at his own request. And as I have stated on another occasion, the door of ADAE is open to all the leaders of the parties represented in the Parliament, whom article 8 §6 of the recent law 5002/2022 (as also preceded by article 5 §4 of Law 2225/1994) makes me institutional interlocutors.

2. The Prime Minister he never asked to meet me. And this happened obviously because I had regular communication on issues of the competence of the ADAE all these years that I have been President of the Authority, with the responsible Minister, Mr. Gerapetritis. I also had two meetings on my own initiative with the Minister of Justice.

3. I never mentioned that briefing political party leaders should be limited to reporting statistics in relation to declassification. In any case, these are made public with the annual report of events drawn up by ADAE. What I had mentioned both to the Parliament’s Institutions and Transparency Committee in response to a relevant question from a Member of Parliament as well as in my letter to the Minister of Justice was that the provision of Article 5 §4 of Law 2225/1994 (which does not apply now), which stipulated that the President of ADAE informs the leaders of the political parties of any case of a prosecutor’s decision to remove confidentiality, during the time I prevailed in ADAE, already before I took over its Presidency, perception, could not be interpreted that it has the meaning that there is an obligation to notify the aforementioned leaders of the full content of each prosecutor’s order with its confidential information, because the law reserves the notification of these orders only to the Minister of Justice. In addition, I had explained that, regardless of the above, it had become impossible to inform the leaders of the parties about each provision, when in 2021, for example, they reached 18,000 in total. Finally, I note with regard to this issue that apart from the 7.12.2022 request of Mr. Leader of the Official Opposition, no political leader had ever asked me to inform him about any issue of lifting confidentiality.

4. Except that by no provision of the Constitution or the law does not prohibit the Presidents of independent authorities from writing articles on scientific issues, I wrote one and only article during the entire almost four-year period that I am in the Presidency of the ADAE and this was the formulation of a scientific opinion, for which I explicitly had clarify that it does not echo the views of ADAE, in my article of 7.4.2021 on the legal website WWW.constitutionalism.gr.

5. As far as I know it is not prohibited for Greek government officials to testify in committees of the European Parliament (in which, as is known, Greek MEPs also participate). Twice during my term of office I testified at the PEGA Inquiry Committee of the European Parliament in the context of hearings and not as a witness and never on my own initiative, but following a summons. In both of these cases, in addition to me, many other Greek government officials also testified, such as, for example, Mr. General Secretary of the Ministry of Justice in the first of them.

6. I must remind again that in accordance with the provision of article 6 § 1 of Law 3115/2003 “The ADAE carries out, ex officio or upon complaint, regular and extraordinary controls, on facilities, technical equipment, records, data banks and documents of the National Intelligence Service ( E.Y.P.), other public services, organizations, businesses of the wider public sector, as well as private businesses dealing with postal, telecommunications or other services related to response and communication”. I cannot, therefore, understand what legality problem the controls recently carried out by ADAE on providers create. As far as ADAE’s file is concerned, apart from the fact that the Authority had an excellent digitized file, it should still to carry out checks on the providers to establish that they have implemented a specific de-privacy provision and if the legality is respected, I have repeatedly explained to the Institutions and Transparency Committee that the ADAE is not responsible for the non-existence of a special digitized and editable electronic file, since the Greek state has permanently chosen to transmit the vast number of declassification orders in paper form. The accumulation of several tens of thousands of provisions and decrees in special storage areas of the Authority makes it completely impossible to manage and process it by an extremely understaffed authority, such as ADAE. This becomes, moreover, almost impossible with the new law 5002/22, in article 8 par 2 of which it is stipulated that the search for data from the ADAE archive can only be done by its President and two other members of the Plenary, prohibited by this way of assistance in this matter from the staff of the Authority. Finally, I would like to remind regarding this issue that the Greek State has not yet issued the joint ministerial decision, which was foreseen by the law (article 37 par.2 Law 4786/2021, Official Gazette A 43/23.3. 2021) and which is the necessary condition to finally make it possible to operate a usable electronic file of the ADAE and this despite the lapse of 22 months.

7. Regarding the reference to alleged lack of respect on my behalf and on behalf of the Authority of the Prosecutor of the Supreme Court, I must note that, as I explained in the press release dated 10.1.2023, the opinions of the prosecutorial bodies are respected as scientific legal texts, but they are not legally binding . Furthermore, independent authorities are of course also subject to the principle of legality, but this does not mean that they can be subject to preventive control and formulate binding instructions from any other state body on how to exercise their powers. If someone thinks that an act of an independent authority is not legal, he can appeal to the competent authority to rule on the matter under the Constitution and the Administrative Justice Act.

8. I consider it deeply insulting to my honor and reputation the claim that I aspire to play the role of a political agent. Where does the government representative derive this statement from? My past of almost 40 years in the Council of State and almost 4 years in ADAE prove it beyond any doubt. Everyone who knows me can testify to this. Nothing is more alien to my character and pursuits than my involvement in politics.

9. Finally -unfortunately I’m afraid not too much-, I am obliged to remind that the independence of the Authority for Ensuring the Privacy of Communications, which I have the honor to head, is established by the Constitution and vis-à-vis the executive power, and is accountable to the Parliament. It is also self-evident that, like the other independent authorities, the ADAE must function as an institutional counterweight and guarantor of the principles of the rule of law in its field of competence. This alone I am determined to continue to do honoring the commitment I made by accepting my appointment as head of the Authority by the vast majority of the Conference of Speakers of the House.