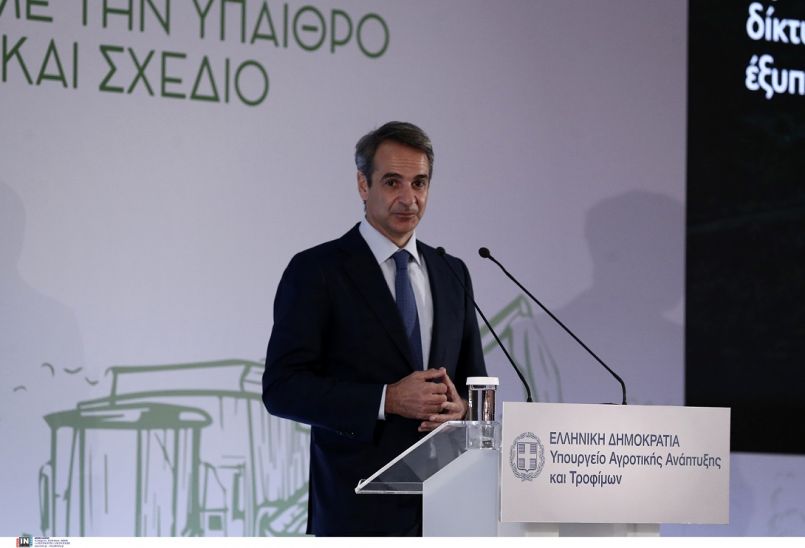 Mitsotakis: For the first time we are launching irrigation projects with public-private partnership |

“The country has to launch a large coherent project of irrigation projects, essentially from the 60’s. And today we have the financial tools to be able in different conditions, more difficult, due to climate change, to implement a project that has a pan-Hellenic imprints and faces chronic problems of lack of irrigation water in many areas of the country “stressed the Prime Minister Kyriakos Mitsotakis at the event of the Ministry of Rural Development for rural development infrastructure projects through PPPs.

He pointed out that each of the works presented had its own local significance. “I know how important for the plain of Xanthi is the work of moving the waters of Nestos, a work that has been discussed for decades. Also, the work of Tavropos is of great importance because we do not only need to build new dams, we also need to intervene in the irrigation networks themselves, to modernize them. Because we know that one of the biggest problems in water management is not only the fact that water is scarce in some areas of the country, it also concerns the losses, especially in the water transmission networks, the most obsolete. “About 80% of the water that is directed to irrigation, a large part of it is lost because we do not have the necessary know-how and modern networks to reduce losses,” he said.

The Prime Minister also noted that these projects are of paramount importance for a country that invests in its primary sector and wants its farmers not to worry about water and not to resort to expensive drilling which often has a high environmental burden. “And the secondary environmental benefits of the project are quite obvious as long as you look at the wetlands created by projects built in other decades of the 20th century to realize how many side development benefits an area of ​​such projects can have,” he said.

“It is also very important the way in which this program will be launched. For the first time, we are launching such projects with the method of public-private partnership “, said the Prime Minister, noting that the implementation of this plan requires speed and compliance with the schedules, as he said” The resources of the Recovery Fund come with several conditions not only towards the way of their utilization but also towards the procedures “.

Finally, Kyriakos Mitsotakis made a personal reference to Konstantinos Mitsotakis who, as he said, had a great interest before his time, on the issues of water resources management. “Some of you may remember that in the early 90’s there were times when we were facing water shortage problems, water supply problems and many important infrastructure projects were launched and completed in terms of water supply in Athens, but a very important project of small and medium reservoirs was launched in which has solved irrigation and water supply problems for many decades.One of which is the two dams of Mykonos which allowed Mykonos to be what it is today.Because without these dams Mykonos would not have water and would be dependent from water transport and it is doubtful if it could have the development and the dynamics that it has and from which its inhabitants benefit primarily “, stressed the prime minister.

Facebook
Twitter
Pinterest
WhatsApp
Previous article
Poland: Conviction by the ECtHR for breach of the rule of law
Next article
Thelma Assis releases book and claims to be a ‘black woman who ran away from statistics’