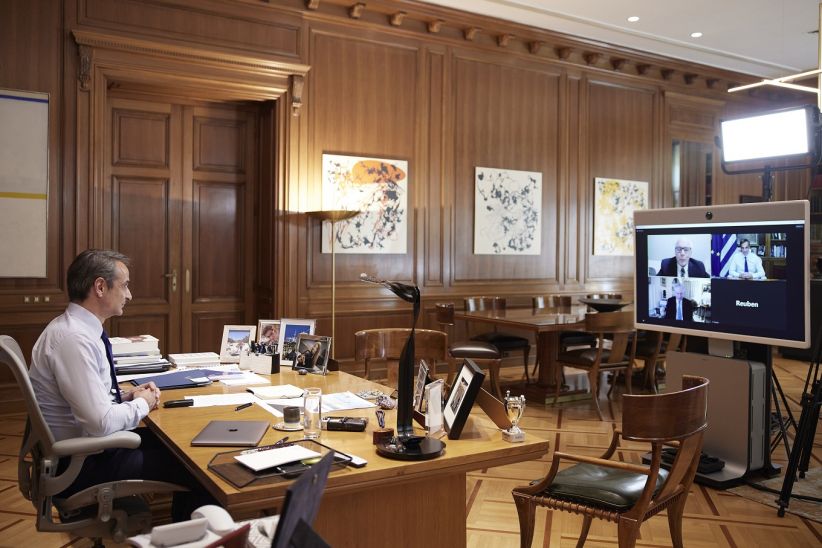 Mitsotakis in Forbes: Everyone will benefit from the strong growth we will see in the coming years |

Prime Minister Kyriakos Mitsotakis spoke via teleconference with Forbes Media President Steve Forbes. The video of the conversation is shown as part of the “Ancient Wisdom, Modern Compass” event, organized by Forbes in Shanghai today, and published on the Greek Forbes website.

The first question was about the involvement of the Greek Prime Minister with politics, while he had a successful career in the business world.

“As you know, I come from a political family. So the real question would probably be why I started with business and not politics. However, I worked for more than a decade in the private sector. I have always been interested in the public, but I believe that it is absolutely necessary for anyone who is thinking today to pursue a career in public life to have a solid professional background before pursuing a political career “, answered Mr. Mitsotakis noting that he learned a lot in business and is aware of real problems of the economy.

The Prime Minister says that good politicians must be both visionary leaders and very capable in managing daily affairs.

Answering the question how he achieved such a good result in the 2019 elections, he stated that it happened because “we offered Greece a clear alternative way”. He emphasizes: “After a decade of crisis and four years of populism of the Left, we have pledged to the Greek people that we will reduce taxes, improve their disposable income, attract investment, create jobs, upgrade the country’s position in the Europe and we will strengthen the geopolitical position of Greece. And despite the pandemic and all the difficulties we have been facing in the last 26 months, I believe we have succeeded in achieving our goals. And I think that’s one of the reasons why we’re doing so well in opinion polls. I believe that the citizens understand that we are fulfilling our pre-election commitments “.

The Prime Minister was also asked about the measures he took for the recovery of the economy and after noting that the over-taxation of the middle class by the previous government led to very low growth rates and uncontrolled tax evasion, he said that he reduced the corporate tax rate to below 28% and will stabilize at 22%.

He underlined that the economy has responded very dynamically, that in the second quarter we had a growth of 16.2%, while the forecasts for the whole year were revised to 6.1%. “I will not be surprised if the growth rate eventually rises to even higher levels,” he added.

“I think we have a coherent low tax policy that does not endanger our budgets. We must always pay close attention to this issue. You know that we have a high level of debt as a percentage of GDP. But at the end of the day, the markets are the best judges of the correctness of our policies and the markets reacted very, very positively “, Mr. Mitsotakis continued, stating that we borrow at historically low interest rates.

“We have a cash reserve of 40 billion euros today, while private companies are also attracting funds with very attractive valuations,” he added, citing PPC share capital as an example.

After a relevant question, the Prime Minister explained why Greece is not only suitable for tourism but also for permanent residence. “We have horizontal income taxation for anyone who wants to choose Greece as their permanent tax headquarters. For Greeks returning from abroad, we offer a 50% discount on the taxation of their future income. We have created an attractive framework for companies that manage assets to relocate to Greece and now we have a visa program to attract the so-called digital nomads. Suddenly, with Covid, we realized we could work from anywhere. “Why should someone who can work from anywhere not choose to work from Greece?”, He said, emphasizing that Greece is a safe country and a member of the eurozone, while noting that the real estate market in Athens is flourishing.

In addition, he said he was excited about the opportunity to attract people to Greece for business and entertainment. “We do not want people to come only for holidays. We want them to be professional in our country. We want – why not – to retire here. “If you are a European retiree from Scotland, why not spend your winter in Greece and your summer in Scotland?” He said.

He was also asked about the way in which one can start a business in Greece.

“We have made progress. We can do even better. Unfortunately, as you know, the World Bank has suspended its qualifying report. “I hoped we would be ready for another big leap in 2021, but I believe that the wider world understands that it is easier today, based on the regulatory framework, to do business in Greece,” he said, referring to the country’s digital transformation and the portal. Gov.gr which offers more than 1,000 services online. “This was perhaps the biggest change in the daily ability of Greek citizens, but also of businesses, to interact with the state,” he said, stressing that Greeks consider it the most important achievement.

He also spoke about facilitating renewable energy companies to be licensed, and said the government is looking at all key sectors to simplify procedures.

“So we want to have the citizen in the spotlight. At the end of the day, we serve the citizens and we want to make their lives easier as we recognize the value of their time “, he stressed.

Asked about the lessons from the ten-year crisis that has hit Greece, he said that excessive austerity is killing the economy. “The second lesson is summed up by the phrase ‘never trust populists when they present a manifesto that we all know is still good enough to be true,'” he added.

Mr. Mitsotakis also stated that there is significant political stability in Greece and that he believes “that we have a very good chance of winning the next elections.”

“What I do not want to see is a high level of GDP but also an increase in income inequalities. So I want to make sure that everyone will benefit from this new period of strong growth that I believe we will see in the coming years. “And, of course, my most important priority is job creation,” he said.

The Prime Minister also referred to our relations with China. “It is complicated, we are partners and competitors at the same time. All this is happening at the same time. But on the mutually beneficial part of the equation, yes, China has made a significant investment in the port of Piraeus and they have significantly upgraded the port. “It is a big trading partner for us and of course China is a big trading partner for everyone, not only for Greece”, he underlined while noting that China is a huge market in terms of incoming tourists.

Referring to tourism, he estimated that it will fully recover in 2022 and noted that this year we did much better than we expected. “The American market – and I want to emphasize that – is really open. We had ten direct flights from the US to Athens every day, and I think this is just the beginning in terms of American tourists who can come to Greece. So I am quite optimistic that 2022 will be a very important year for Greek tourism “, he continued while emphasizing that we place great emphasis on sustainable tourism and will consider destination management tools to ensure that we protect our most vulnerable ecosystems.

“I would rather welcome fewer tourists who spend more money than more tourists who spend less money in Greece,” he said, adding, among other things, that we want to extend the tourist season and make Athens, Thessaloniki and other major cities destinations to European tourists spend their weekend.

“I have a lot of work to do. “Honestly, I have not thought about what I will do after politics and of course, at some point, all political careers will end,” he said when asked if he would return to business. “Ask me again about this in a few years. “But at the moment all my energy is focused on the implementation of our ambitious agenda”, he added.