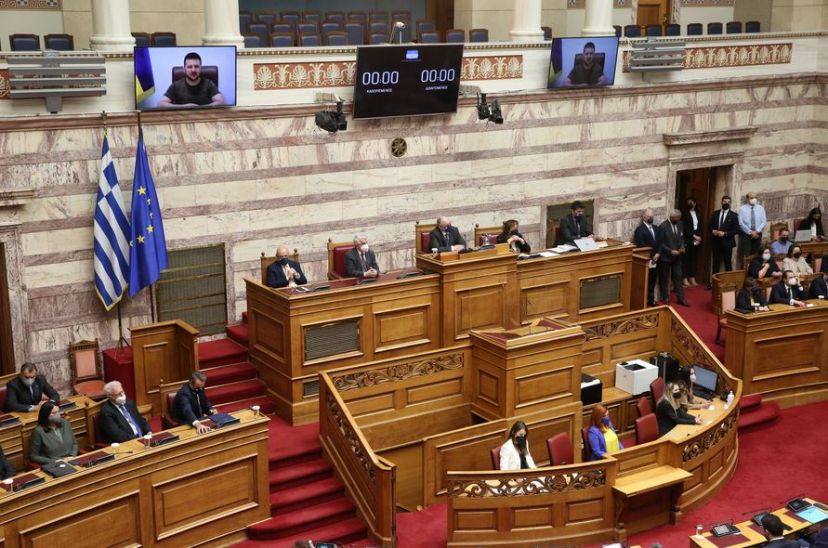 Mitsotakis for Zelenski’s speech: We stand for a free Kyiv

“The Athens of the Republic supports the free Kyiv, with its own, parallel struggle, as all the capitals of peace do,” said the Prime Minister, Kyriakos Mitsotakis after the Zelensky speech in the Greek Parliament.

He stressed that the Ukrainian president “catalytically conveyed to us the courageous resistance of his fellow citizens against the violation of their most basic rights” and “described the barbarity of the invader who decimates civilians, dismantling the vital infrastructure of the country.”

The full statement of the Prime Minister:

“Today’s sitting of the Greek Parliament was, indeed, historic. Because, for the first time in the 21st century, it hosted the leader of a people who are fighting for their homeland. And, at the same time, it defends the rule of law and democracy throughout Europe. The voice of the wounded Ukrainians standing up. Sieged, but free!

In a catalytic way, President Zelensky conveyed to us the courageous resistance of his fellow citizens to the violation of their most basic rights. On the other hand, he described the barbarity of the invader decimating civilians, dismantling the country’s vital infrastructure. While in his words resounded the slogan of millions, who fight for their lives, their homes, their families, and together for the dreams they had for a future of peace and progress.

We also heard his touching call for help and support. To which we respond. Today in the dark, but also tomorrow in Xasteria. When we will be present in the reconstruction of the martyr Mariupol. Not only because the protection of the Greek community there is a national duty. But also because the battle of Ukraine concerns us. The despotism that encroaches on neighboring territories and the revisionism that abolishes borders must be defeated on the borders of Ukraine.

Hellenism, after all, knows well from attacks and threats, living for a long time the mutilation of Cyprus. He could not, therefore, not resist the massacre in Ukraine, which was not chosen by the civilized world. Against which, however, he chooses to defend himself. And it does. Isolating the conqueror and shielding the open Democracy from populism that raises its head to bridge the gaps and question its steady function again.

That is why the Athens of the Republic supports the free Kyiv, with its own, parallel struggle, as all the capitals of peace do. In order not to spread the lie of authoritarian propaganda. To explain the reasons for the new economic ordeal caused by the unjust invasion everywhere. And to relieve the citizens with effective measures. But also with truths, so that with unity, endurance and responsibility we can win this bet together.

What Volodymyr Zelensky said today has a wider radiance. Europe is called upon to immediately extinguish the fire of war that ignited in its “heart” the Russian regime. And to face together its consequences in its economies and societies. The heinous crimes that were committed to be punished. And International Law to become the compass of its course again. Greece is walking on this path. Faithful to history and its principles and consistent with its allies.

Against blood and arbitrariness every hesitation is guilty. Freedom and Democracy is our answer, whatever the question. So we greet the Ukrainians with the lyrics of their national poet Taras Shevchenko: “And you, generous heroes, God does not forget you. “Keep fighting.”