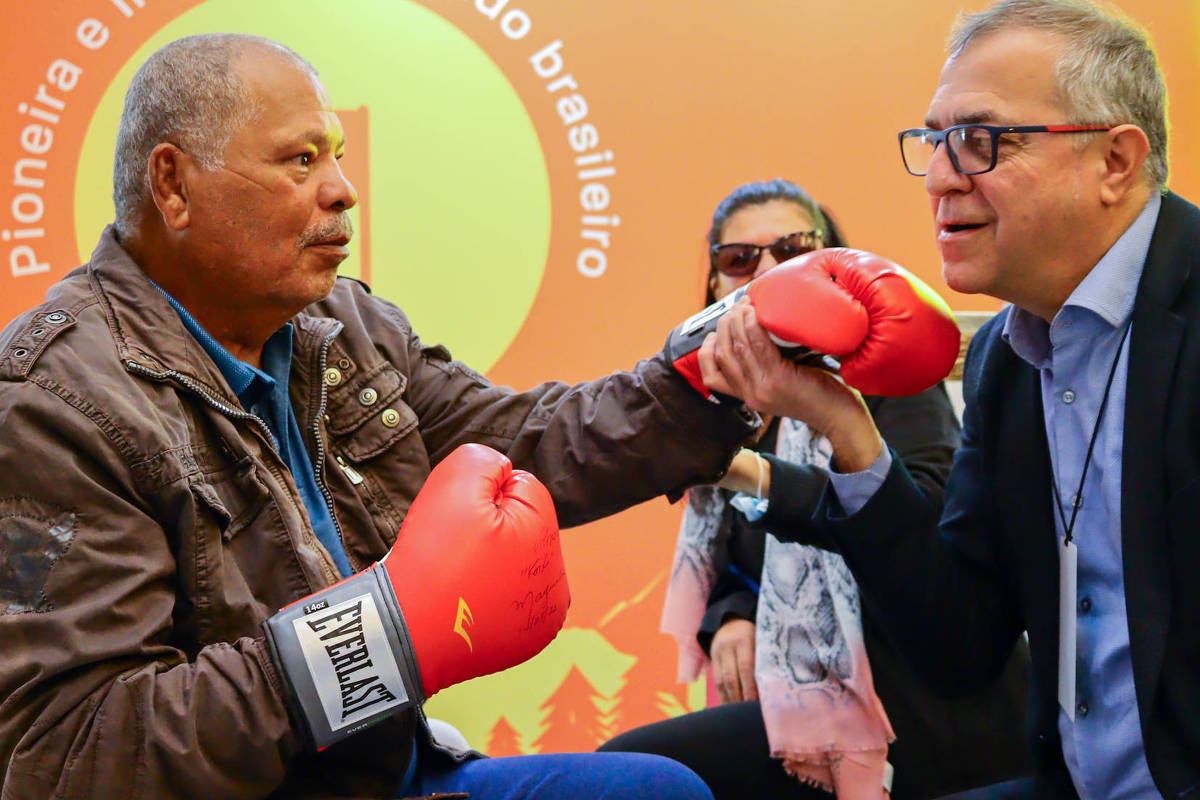 Who would win a hypothetical duel between George Foreman and Daniel Falconi? What if the confrontation was between the Argentine and Mike Tyson? Imagining what those fights would have been like is a pastime for Maguila.

“Foreman and Falconi, who would win? The Foreman”, says the Sergipe native in one of the videos posted on his official profile on Instagram. And Falconi and Tyson? “Tyson wins,” he says to his more than 70,000 followers on Instagram and TikTok.

While letting himself be carried away by his imagination, the most successful heavyweight in Brazilian boxing exercises his memory with an important activity for the treatment of Chronic Traumatic Encephalopathy, also known as dementia pugilistica, which he has struggled with for years.

In the images, it is possible to notice that his diction is no longer the same as when he was an athlete, as well as his speed of reasoning. But the good mood is still there. The easy smile appears as he starts spelling out words. “Pindamonhangaba? There’s no way to spell this one. Pi-pin-damonhangaba (laughs).”

However, Maguila was not always able to live well with the disease caused by trauma to the brain, especially due to the difficulty of diagnosing it. In 2010, he received an initial diagnosis of Alzheimer’s, a fact that not only hindered the beginning of his treatment but also the indication of the best medicines.

“It started with a depression,” he recalls to Sheet Irani Pinheiro, Maguila’s wife and lawyer. “After they were diagnosed with Alzheimer’s, there was a lot of medication. And these psychiatric medications are complicated. So, we had a very painful phase.”

Four years ago, Irani chose to continue her husband’s treatment at the Anjos de Deus Therapeutic Center, a clinic in Itu, in the interior of São Paulo, where the former boxer is hospitalized. “We tried to keep him at home, but we couldn’t because he didn’t obey. [na hora da] medication,” he says.

In addition, the lawyer noted that her husband was more agitated, with less appetite and “with a look of infinity, lost, you know? We talked to him and he seemed a little far from reality”.

At the clinic, along with specialized care, the former boxer had cannabidiol included in his treatment. Daily, he consumes drops of CBD (cannabidiol) isolated, without THC (tetrahydrocannabinol) molecules.

The herbal approach was suggested by neurologist Renato Anghinah, a doctor in Maguila for over eight years and a specialist in brain concussions. According to the professional, cannabis is fully indicated for disorders such as autism, epilepsy, anxiety, sleep disorders, behavior and agitation.

“Maguila is very connected, which he was not before, and this change comes from the cannabidiol. He has regained his appetite, which he had lost appetite for. And, above all, he is calmer”, he says. He rarely has any episodes of aggression these days, says the doctor. “Even his sleep has improved.”

Irani says he is witness to this change. She says that she maintains daily contact with her husband by phone and video calls, in addition to the frequent visits she makes to him, as well as some family members.

The ex-boxer’s wife also says that she had already heard about the possible benefits of taking cannabis treatment and that she was sure that it could benefit her husband after the indication made by Anghinah. “When it comes from a professional you trust, you know it’s best for the patient.”

Making use of cannabinoid medicine does not mean enjoying the psychoactive characteristics of the plant. In this way, it does not mean that the treatment is like “smoking marijuana”.

“In most American states, you buy these products by mail, without a prescription because they are considered a dietary supplement”, says Renato Anghinah.

According to the professional, many athletes around the world have started using cannabis for pain and inflammatory processes. He emphasizes, however, that these athletes use it precisely without THC, which is prohibited in sports that have anti-doping controls.

“The most interesting thing is that corticosteroids are now considered a banned substance by Wada [a World Anti-Doping Agency, Agência Mundial Antidoping]. So, the Tokyo Olympics were the first that had an absolute ban on steroids and the full release of isolated cannabidiol”, he quotes.

Anghinah, however, reinforces that Maguila has a degenerative disease and therefore has no cure. In his case, treatment with cannabidiol aims to offer a better quality of life. Even so, the doctor does not see that the former fighter may one day return to live outside the clinic.

“It is unlikely that he will leave the clinic and continue treatment at home. This is not what is in the script of the course of the disease.”