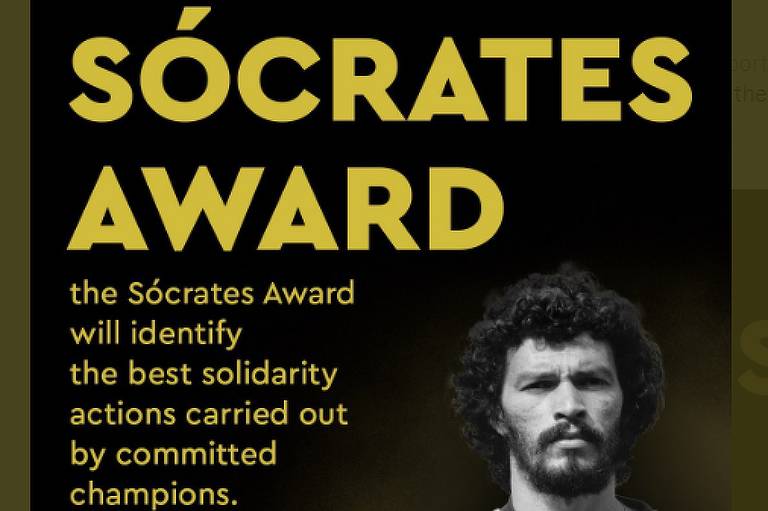 The World is a Ball: A player from Corinthians and the national team, Sócrates baptizes the Golden Ball award

Dead for almost 11 years, on the day Corinthians became Brazilian champions in 2011, Sócrates Brasileiro Sampaio de Souza Vieira de Oliveira, the unforgettable Doctor Sócrates, will give his name to one of the awards given at the prestigious Golden Ball ceremony.

This year’s France Football magazine event, which culminates in the nomination of the best player of the year, will be held on Monday, October 17, in Paris.

And the newest award – created by Grupo L’Équipe, owner of France Football, in partnership with the Monegasque organization Peace and Sport – is the Sócrates Trophy, which will be awarded to the best solidarity action carried out by a footballer.

“We wanted to create an award that recognized the work of players, often invisible, in supporting initiatives in favor of social inclusion, environmental development, or helping people in precarious situations or victims of conflict,” said Jérôme Cazadieu, editorial director of the magazine.

Within the objective of building a “more peaceful and inclusive” society, in the words of Joël Bouzou, founder of Peace and Sport, Socrates would fit in – my conclusion – more for his democratic ideals than for the execution of charitable actions.

When he defended Corinthians, the midfielder (protagonist of the two-time São Paulo champion in 1982 and 1983) became famous for having been one of the leaders of Democracia Corinthiana, a movement that valued freedom of expression in the club, and for campaigning openly for direct elections in the Brazil under the dictatorship.

In short, the Doctor, so called due to his degree in medicine (USP), was an example of citizenship.

In the words of his brother Raí, São Paulo’s idol and one of the judges in choosing the winner of the new award, Sócrates wanted “a fairer world”.

Doctor by training, he was also a doctor in the field, due to his leadership, wisdom, intelligence, competence in football performance.

Not to mention the class, with the brilliant heel strikes, a resource he used with primacy not on a whim, but because, tall (1.92 m) and thin (his other nickname was Magrão), he made it easier and faster to play.

In clubs, in addition to Corinthians, he defended Botafogo-SP, where he started his career, Fiorentina (Italy), Flamengo and Santos.

With the addition of the Sócrates Trophy, whose candidates are not yet known, the Golden Ball ceremony now has seven awards.