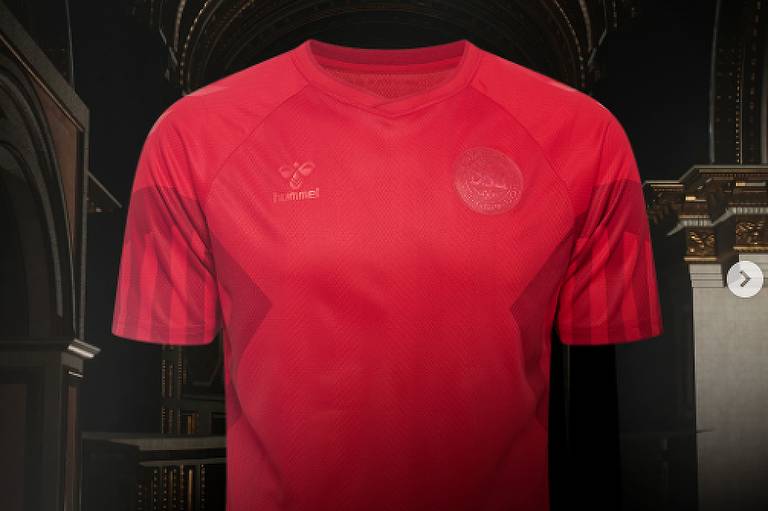 The World Is a Ball: Denmark will ‘hide’ shield at World Cup in protest against Qatar

The uniforms at the World Cup are an attraction in themselves.

Before the event, sporting goods manufacturers launch new clothing for the teams with which they have a contract, and the kits used in the World Cups usually offer novelties, whether in terms of design, color or type of material.

This week, Hummel, who wears Denmark, showed off the three shirts that the team will be able to wear in the Qatar Cup, which starts on November 20th.

One is red (first choice of the European team), one is white (second choice), one is black (third choice).

The novelty is on account of the shield of the Danish confederation and the sponsor’s logo.

Both, being the same shade of each shirt, are notably imperceptible, as if they were hidden in the garment.

It’s not a mistake by whoever made it. The attitude is purposeful, with the intention of not being shown at the Qatari World Cup, in a demonstration against the country that is frowned upon due to the affront to human rights.

“The color of mourning. The perfect color for Denmark’s third shirt for this year’s World Cup,” Hummel wrote on social media as he showed off the black shirt.

“While we support the Danish national team all along, this should not be confused with supporting a tournament that cost the lives of thousands of people. We wish to make a statement on Qatar’s human rights record and its treatment of migrant workers who built the country’s Cup stadiums.”

There was also a comment about the red shirt, which is inspired by the Euro 1992, won by Denmark, in which the company makes explicit the intention of not wanting visibility during the competition.

Organizers of the Qatar Cup, the first in the Middle East, dispute Hummel’s claim that there were thousands of deaths on the construction site for the event.

“We completely reject trivializing our genuine commitment to protecting the health and safety of the 30,000 workers who built World Cup stadiums and other projects,” the organizing committee said.

“Our work is recognized by various entities in the international human rights community as a model that has accelerated progress and improved lives,” the body adds, citing the UN’s International Labor Organization.

NGOs, such as Amnesty International, have denounced the precarious working conditions to which workers in World Cup projects are subjected, as well as mistreatment of them, many of whom are immigrants from poor or impoverished countries, such as India, Bangladesh, the Philippines. from Nepal.

The number of employees killed or injured, however, is difficult to verify, due to data not reported by the Qatari authorities.

Semi-finalist of the Euro 2021 held in England, Denmark is in Group D of the World Cup. Their opponents will be France (the current champions), Australia and Tunisia.