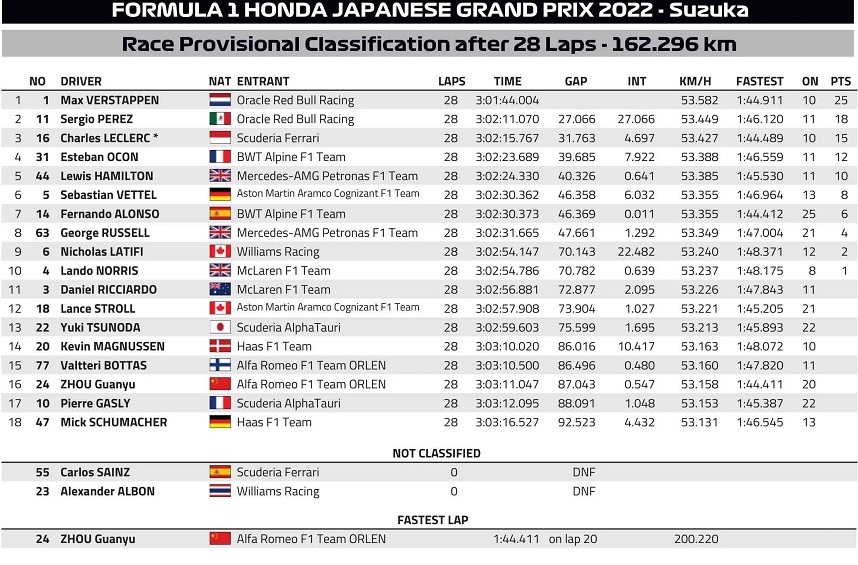 Verstappen is champion, due to Leclerc’s penalty!

Champion in Formula 1 for the second season in a row o Max Verstappen! Her pilot Red Bull dominated an eventful race at Suzuka, Japan, which was interrupted by rain and an accident at the start for 2 hours and 15 minutes, and lasted just over 40 minutes in the end.

This was the 32nd victory in Verstappen’s career and twelfth this year. The penalty imposed (5 seconds) on Charles Leclerc in the finale of the race, it mathematically gave Verstappen the title too, after it was decided to award all the points to the drivers (even though 75% of the race was not completed), as it continued and was completed, despite the long stoppage! Second finished o Sergio Peresalso with Red Bull, while third was Leclerc with Ferrari, who… paid for the unorthodox way in which he kept the “Czech” behind him just before the finish.

The rated ten were completed, in order, by Ocon, Hamilton, Vettel, Alonso, Russell, Latifi and Norris. There are now four Grand Prix left, with the next one taking place on October 23 in Austin, Texas, USA.

Mayhem at first and… mini-fight afterwards


The race started episodicallysince the rain was torrential and at the start Carlos Sainz lost control of the Ferrari ending up in the barriers, while for mechanical reasons Alexander Albon also retired.

Visibility was… minimal, especially for the cars that were in the back positions and the risk was high, resulting in the red flag. Before the safety car could come in and safely guide the cars into the pits, a crane entered the track, causing strong reactions from pilots and teams commemorating the tragic death of Gilles Bianchi on the same track and under the same circumstances on 5 October 2015.

The match was stopped and its restart was constantly postponed, until finally the green light was given two hours after the stoppage! However, with only 45 minutes left until the race cut-off (11:00 Greek time), it was questionable whether all the points would be awarded, as there was no time to complete 75% of the race’s laps.

Verstappen, who had withstood Leclerc’s “attack” at the start and before the stoppage, retained his position. He led the Top 5 drivers almost immediately after the restart in the pits to fit the medium tire and then the world champion defended his position to take another victory.

Leclerc finally had to fight to keep second place and leave Peres behind him at the finish line. But after the five-second penalty imposed on him, Verstappen also mathematically took the championship!

The great winner made his first remarks unaware of Leclerc’s penalty, but with his placement complete, the confirmation from the stewards and the necessary TV visuals for his coronation appeared, with four races to go in the season.

Max Verstappen, you are a DOUBLE WORLD CHAMPION ???? pic.twitter.com/mViZ5woEit

Facebook
Twitter
Pinterest
WhatsApp
Previous article
EUR/USD: US consumer price indices on the menu
Next article
Zelensky: He ruled out the possibility of diplomatic contacts with Russia