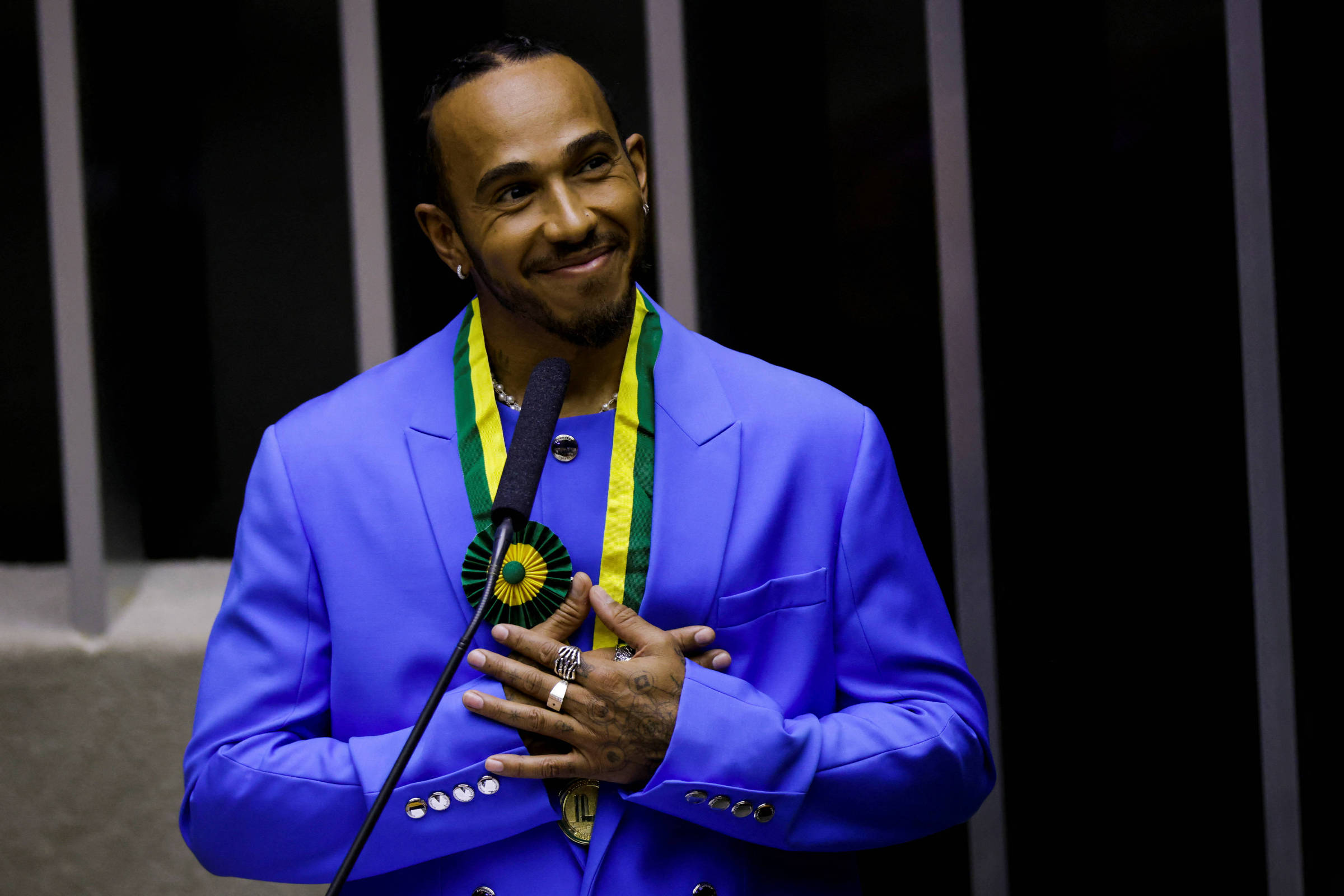 The Chamber of Deputies has probably never looked so much like the stands at the Interlagos circuit as it did on Monday (7), when the plenary welcomed driver Lewis Hamilton for the delivery of the title of honorary Brazilian citizen.

“I would like to dedicate this honor to Ayrton Senna, his family, his friends and his fans. When I was five years old, I saw him run for the first time and that was the moment I knew I wanted to be a world champion like him. and learned about Brazil, it was there that I started to play [o jogo de videogame] FIFA with the [time do] Brazil”, he said in the rostrum.

Hamilton also said that he intends to get to know the Amazon rainforest and highlighted, as he usually does, his place as a black man within a Formula 1 universe that, according to him, still has a lot to advance in terms of diversity.

It inspires me to come to Brazil because I see so many people struggling, such a diverse audience and we have a lot we can do together, we just have to unite, stay positive, focused on our goals, not take no for an answer and never give up, because not there’s nothing we can’t achieve,” he said.

“Now I feel like one of you,” he finished.

Hamilton was received with head of state protocol in the Chamber of Deputies, walking up the ramp to the National Congress.

Inside the plenary, he sat next to the mayor, Arthur Lira (PP), and waved to the audience, while a huge number of parliamentarians, advisors and fans huddled together to celebrate and try to get closer to photograph the pilot.

The chairs of the House took on a bleacher tone, with banners, children on laps, shouts of “home with me” and Mercedes caps (his team). In chorus, those present sang that “aha, uhu, Hamilton is ours” and Brazilianized the English name for “Luís Hamilton”.

The distant climate of parliamentary decorum made Lira, at the end of the session, play with the 2021 world championship, when Hamilton ended up defeated by Max Verstappen in the last race of the year and which was marked by controversies and accusations of favoring his opponent.

“The feeling of your fans is the same as that of us Flamengo fans, we were forked at some point, but the titles really are seven, and in the hearts of the fans there are eight”, said the president of the Chamber.

The most remembered point to justify the honor of being a Brazilian citizen, by the way, was precisely the Formula 1 Brazilian Grand Prix that year, when Hamilton wore a helmet in honor of Ayrton Senna, won the race and celebrated with the green and yellow flag, just as it was the tradition of the Brazilian pilot to do.

In his career, Hamilton was the driver most engaged with social causes, especially during the Black Lives Matter protests, when he led drivers in the movement for more social equality.

In this year’s elections, he liked a comment from a follower who asked for the return of Luiz Inácio Lula da Silva (PT) to the Presidency.