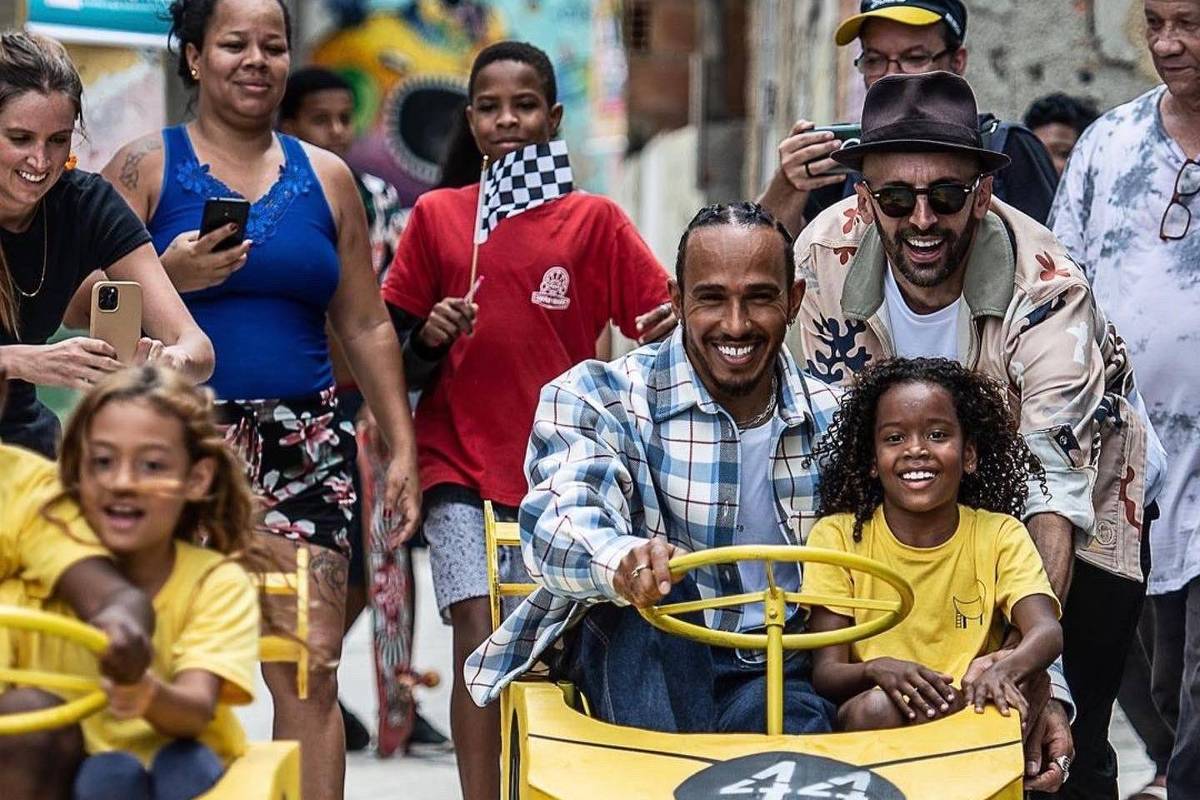 Sport brings people together, it can’t just be a cash machine, says Hamilton

Lewis Hamilton, 37, sought to expand his ties with Brazil on his trip to the country for the next round of F1. In Rio de Janeiro, he visited Morro da Providência and even played with children. In São Paulo, he spoke with students from the Lasar Segall State School, in Vila Mariana.

It was an old desire of the English to get to know the Brazilian communities more deeply. It became even more important to him after he was awarded the title of honorary citizen of the country a week ago.

“I’ve been coming here for 15 years. I’ve been going through the favelas, but I’ve never been inside until today. I didn’t know what they were like inside. Now I see the work they’re doing helping children,” the pilot tells Sheet🇧🇷 “What I notice is that the education isn’t as good as it is being here. And that’s the problem in some places around the world.”

Precisely for this reason, for the seven-time world champion, sport also needs to be a platform for social transformation, especially for its ability to unite people. “It’s not just a sport, it’s not just the money-making machine, it’s not just entertainment. In fact, sport can impact people positively.”

That’s what he tried to do in 2021, when he won the São Paulo GP in an exciting way and, while celebrating, paraded through Interlagos with the Brazilian flag. It was for repeating the gesture immortalized by Ayrton Senna that the Englishman received the title of Brazilian citizen.

“From a distance, I saw the amount of people who died here [por causa da pandemia de Covid-19]”, he says. “So I thought that maybe I could help lift people who have been through such a difficult time.”

This Sunday (13), Lewis Hamilton dreams of, who knows, repeating the gesture in the penultimate F1 stage of the year, at 15:00 (Brasília time), in Interlagos.

You have always declared a special affection for Brazil. How does it feel to return to the country after receiving the title of honorary citizen? It sure is very special. From a distance, I could see people fighting here. I saw the amount of people who died [durante a pandemia]🇧🇷 I knew the country was suffering a lot. We came here for the race, and so I had my own journey that difficult weekend. Winning that race was one of the craziest emotions I’ve ever had. I remember stopping and looking at the flag, picking it up and thinking, “Maybe right now I can help lift people who have been through such a difficult time.” I didn’t know how it would be received, but it was one of the most loving moments I had. I really feel very welcome and welcomed here.

You’ve been racing in Brazil since 2007, but you hadn’t known more about the communities. What is your impression of the places that visited? I’ve been coming here for 15 years. I pass through the slums, but I had never entered it until today. I didn’t know what they were like inside. Now I see the work they are doing helping children. Visiting Rio, for example, I was able to open my eyes. What I notice is that the education is not as good as being here. And that’s the problem in some places around the world. Education is one of the most important things for children, for their future. I know there’s a lot of work to do in the public schools here. I don’t know what I can do to share, but there are some big organizations that are working on it. But the only thing I’ve really seen is that there’s a lot of love here. This is such a rich culture. And with a real, deep positivity that you don’t see everywhere.

What are the main changes you have noticed in the country in the last 15 years, since you started racing here? It’s hard to really see the progress that has been made. I’ve seen some new bridges, new buildings, I’ve seen the city evolve a little better over time. But that’s kind of limited by what I’ve seen. Now I’m trying to understand more deeply what’s in the heart of the city, what’s in the hearts of the people. It’s a big country, there’s a lot to see. I need to go to the Amazon. I need to see much more.

You’ve already said that you grew up loving Brazil because the people here are similar to you. What similarities do you recognize with the Brazilian people? Well, I think that for me and probably for many Brazilians, there is a real lack of representation in so many fields. For me, as a child, there were no superheroes of our color. There weren’t many real big figures on TV. Of course you have people like Muhammad Ali, but they were so far away. I think, then, that Brazilians see in me someone similar, maybe with similar values, who likes to think about being a good person, caring about more than just running. Worry about people. And I think it’s the passion I have for what I do. Maybe that connects with them. I travel all over the world, and so many people ask me all the time: ‘Are you Brazilian?’ [risos]🇧🇷

Can sport bring people together after situations that put them on opposite sides, such as social and political issues? All sports need to do more. When you look at football, it has such a big place in the hearts of Brazilians and people around the world, but organizations need to do it, and teams need to do more. It’s not just a sport, it’s not just the money-making machine, it’s not just entertainment. In fact, it can impact people positively. I mean, it brings together people from all different parts of the city or the country for these events. But the message is so important, the message that they are putting out can really impact kids. So there is a huge amount of work that needs to be done. They used to say that there is no place for politics in sport, and I think that’s silly. I mean, politics is one thing, but human rights are not politics. It is a right that every human being around the world should have. So talking about it shouldn’t be separate, because we are human beings. So you will continue to have my support. I will continue to be frank and try to pull the sport in that direction to do more.

You’re branching out into some new areas, like cinema. What motivated you to create a production company? Will your films carry the flags you raise, such as the fight against racism and the fight for sustainability? I won’t be able to run forever, so I’m very focused on finding things I love, things I’m passionate about. I think I’m good at team building. I think I’m good at motivating people, and what I really believe in is storytelling. There are movies out there that were extremely inspiring to me. In terms of getting up, like I’m having a rough day. There are so many great stories out there that I think they should be told. Different stories to give people hope, to give hope to children. So I want to be a part of it. When I make these films and documentaries, I want to make sure they’re linked to some kind of social cause. It has to have a purpose. Not just the story, but it’s also connected to inspire.

Do you want to become an actor? This is a question I get asked all the time. It’s a weird thing because when I was younger I always wondered if I could be in a movie. I wondered if I could act. Now, I have a platform. But I’m really more focused on trying to lift other people up. I’m on TV at the races all the time. I don’t know if I need to be in the movie, but yeah, I mean maybe if I get a chance and I do something a little bit, maybe it’s something to have fun with. But my desire is to find these great stories and put the right people in place to bring them to life. Being a good actor takes a lot of preparation and time, and I don’t really have the time to do that with all the other things I want to do.

Mercedes has not been able to have a car to fight for the title this season. What will be done for the team to perform better in 2023? These next six months are going to be very, very difficult. Particularly for those on my team who are in the factory having to build, having to dig [um carro melhor]🇧🇷 They’re going to have to dig so deep in that time to take really big steps towards the car we know we can build. We will do it together. I think this year we gained the new tools, we gained a new understanding, we evolved as engineers and designers. And as a team, we are more united than ever.

What was the biggest lesson you took away from this season where you couldn’t fight for wins? Well, I think this has been an unusual year, because winning is a beautiful thing, but the fight is so hard and sometimes it can be painful, but it’s the most rewarding by far. So I’m very grateful that we had this experience together. I know that whatever we face we will overcome. And eventually we will win more races and another championship.