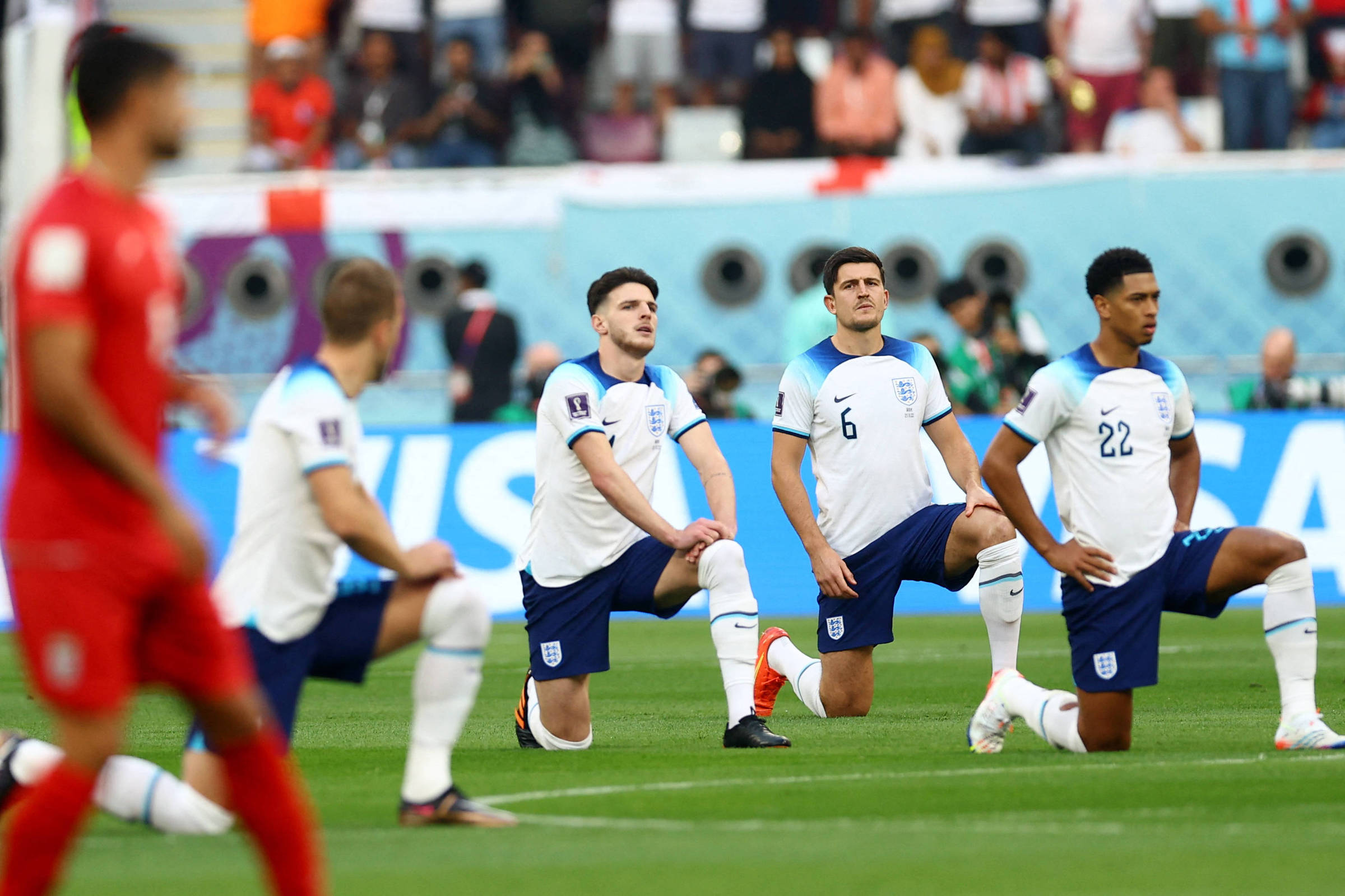 England thrash Iran, and protests take to the field in Qatar

The first world champion team to enter the field in this World Cup, England lived up to the expectations surrounding the match, both in terms of sport and politics.

Moments before the ball rolled into the match against Iran, at the Khalifa International Stadium in Doha, English players knelt on the field in a protest against racism.

When the ball rolled, the European team dominated the match and thrashed the opponent by 6 to 2, with five goals scored by black players: Jude Bellingham, Saka (twice), Sterling and Rashford. Grealish
closed the rout. Mehdi Taremi scored both for Iran.

Iranian players also protested. They chose not to sing the country’s national anthem, in an apparent show of support for protesters in their territory. The protests were triggered by the death of a young woman in the custody of the moral police.

English players kneel, as they do before every match since the murder of George Floyd in June 2020 in the US. The death of the black man, asphyxiated by police agents, triggered a series of protests around the world, under the banner of the “Black Lives Matter” movement.

In England, teams also hold protests before Premier League games, as do English athletes from other sports, such as F1 driver Lewis Hamilton.

In March of this year, the English team received a report with accusations of abuse and disrespect committed against women, the LGBTQIA+ community and immigrant workers in the host country of the World Cup. At the time, defensive midfielder Jordan Henderson, vice-captain of the squad, said the situation was “horrendous”.

From then on, the English team has already started to draw up plans for the protests that would take place during the tournament. One of them, however, ended up being vetoed by FIFA.

Captain Harry Kane was expressly prohibited by the entity from wearing a rainbow armband with the slogan “One Love”, in support of members of the LGBTQIA+ community. The determination took place after a meeting between representatives of Fifa and the English team, according to The Telegraph.

In all, 10 of the 32 teams that are in the Cup intended to wear the armband, but were warned that this could result in punishments, such as yellow cards for their players. In the World Cup, with two accumulated cards, an athlete must already serve a suspension game.

This Monday (21), seven of these teams announced that their captains would no longer wear the armband.

“As national associations, we cannot place our players in a position where they could face sporting sanctions, including bookings,” the England, Wales, Belgium, Denmark, Germany, Netherlands and Switzerland teams said in a joint statement.

The player had a good performance in the match, but it was the black Englishmen who stood out the most.

In the first half alone, there were three goals. Jude Bellingham scored in the 35th minute, Saka scored his first in the 43rd and Sterling scored in stoppage time.

The initial stage was also marked by the first extra substitution in the history of the World Cups due to concussion. The new rule was adopted by FIFA precisely as of this edition. In the case of substitutions due to suspected concussions, coaches can make up to one substitution without discounting the five they are entitled to.

The rule was used by Iran, who had to replace goalkeeper Beiranvand after he collided with defender and teammate Majid Hosseini.

The goalkeeper fell on the lawn, was bleeding and had to be attended by doctors. The player still tried to continue in the match, but ended up replaced by Hossein Hosseini.

After the break, England doubled in the 17th minute, again with Saka. Iran managed to score with Mehdi Taremi, at 20, but Rashford, at 26, and Jack Grealish, at 45, extended to the English in the sequence.

Before the end, in the final minute, defender Stones committed a penalty. The Brazilian referee Raphael Claus checked the bid in the VAR (video referee) and Mehdi Taremi converted the kick.

Facebook
Twitter
Pinterest
WhatsApp
Previous article
Indonesia: The death toll from the 5.6 Richter earthquake has risen to 62
Next article
47,000 elderly deaths from Covid would be avoided if vaccination started 8 weeks earlier