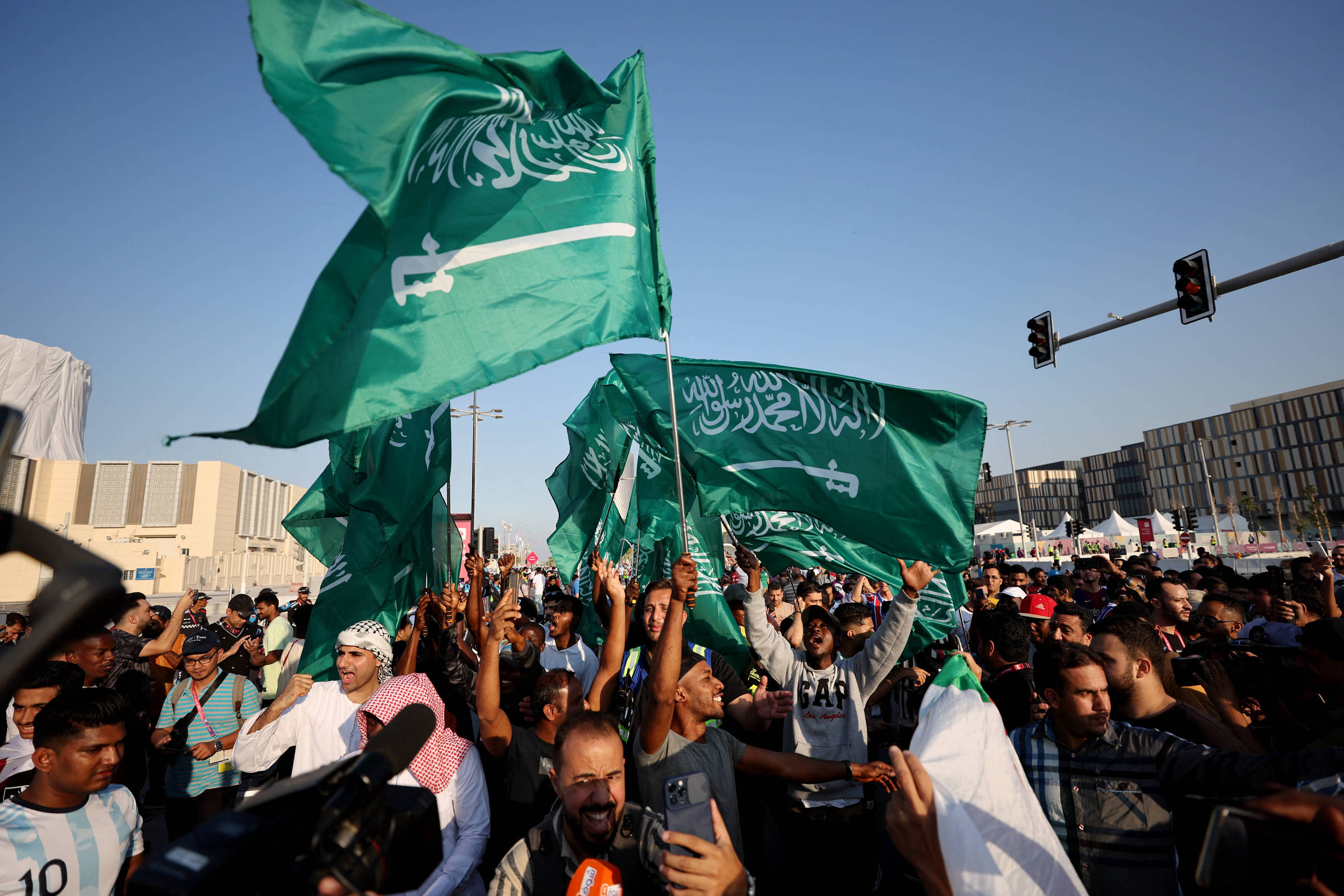 Celebration of Saudi fans marks the country’s rapprochement with Qatar

With every important move, they manifested themselves. When it was Argentina in attack, there was booing. When Saudi Arabia crossed the midfield, shouts of encouragement. It was like that for the whole game. A show apart.

The change in posture of the Saudi players after the break was decisive for the victory. But one cannot disregard the role of the fans of the Middle Eastern country, who, if they weren’t in the majority at the Lusail stadium this Tuesday (22), at least made their chants echo in such a way that they infected the team on the field.

“I don’t know if we’re going to make it through the group stage. But this victory is already an incredible emotion. I’m shocked,” added Aziz Alkhareef, 29. In their sixth participation in the World Cup, the Saudis are looking to repeat the feat of their rookie year, in 1994, when they reached the round of 16.

That’s why the two friends could hardly contain the emotion to speak. Their faces reflected the joy of the thousands of Saudis who are in Qatar to watch the World Cup.

According to the Supreme Committee for Delivery and Legal, fans from Saudi Arabia are the biggest ticket buyers for the tournament. Over the course of the competition, more than 500,000 visitors are expected from the country that borders Qatar.

Their presence in the stands at the Lusail stadium is a milestone in the Saudi rapprochement with Qatar. This has only been possible since last year, when Saudi Arabia announced the reopening of its borders with its neighbor after three years of severed relations between the nations of the Middle East.

“Since the borders were opened, it’s been amazing to be back here. I have friends who live here and it’s good to be able to see them again,” says Raed, 33, a sales manager. He preferred not to say his last name, while a friend beside him guided him on which questions in the report he should answer.

Saudi Arabia, the United Arab Emirates, Bahrain and Egypt began imposing diplomatic, trade and travel embargoes on Qatar in mid-2017, when they accused their neighbor of supporting terrorism. The blockades, however, were also seen as an attempt to punish Qataris for their proximity to Iran.

In 2019, for example, Qatar was also the host of the Club World Cup. At the time, Al-Hilal represented Saudi Arabia in the competition, but even with the club playing a few kilometers from its home, it had few fans in its games, including the semifinal against Flamengo and the dispute for third place against Monterrey. , from Mexico.

The rapprochement of the two nations was considered one of the last victories of the government of former US President Donald Trump. The republican concentrated his efforts on bringing the Arab countries closer to Israel and, in this way, further isolate the Iranians.

Despite being small, with a territory of 11,437 km², smaller than the Brazilian state of Sergipe, Qatar has great international strategic importance as one of the richest countries in the world. Its wealth comes from its natural gas production, a reserve it shares with Iran.

The Shiite Muslim powerhouse is Saudi Arabia’s main regional rival, which is ruled by Sunni Muslims.

In addition, the US maintains around 10,000 military personnel in the emirate, where it has an air base. The pact encouraged by the US government was called the Agreement of the Century. It is a plan to end years of conflict in the Middle East, but it is seen as a pro-Israel action, as it disregards several Palestinian claims.

It was against this backdrop that the Saudis organized a huge party in Lusail. Accustomed to dominating the stands at all Argentina games, the brothers also lost that battle.

Facebook
Twitter
Pinterest
WhatsApp
Previous article
Thousands of clothes “monkey” were found in a store and warehouse in Thessaloniki: 1 person was arrested – Watch video
Next article
Meloni: I confirm Tajani, the Aegean islands belong to Greek sovereignty – I will meet with Mitsotakis