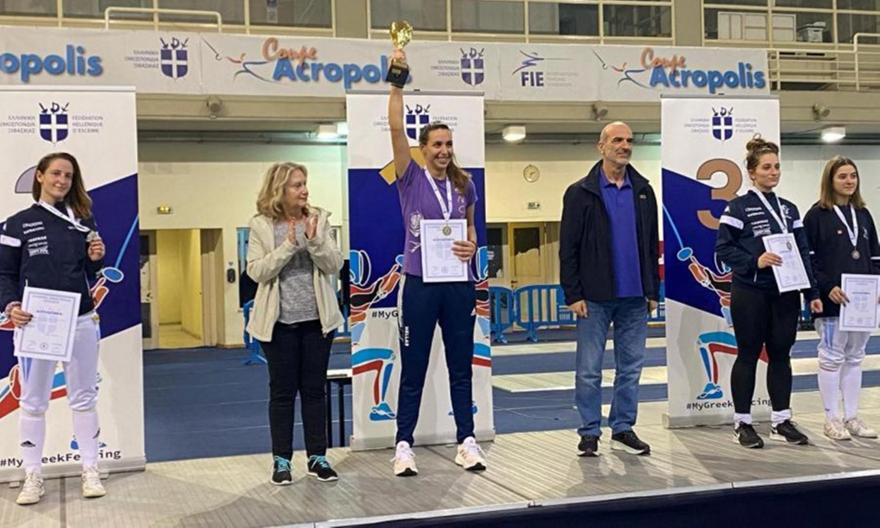 The two-day sword duel is over

In the first Men’s-Women’s Duel Sword Cup for this season we saw some very strong matches. Among the men, the one who managed to prevail was Thodoris Avramidis (GS Iraklis), who beat Nikos Tsokas (OXIF) in the final with a score of 15-10. The other two places on the podium were completed by two other OXIF athletes, Stergios Tsokas and Filippos Hatzitipis.

In the end, the No1 of the domestic ranking, Savvas Kavadias (PAO), did not participate in the event.

The first eights and the detailed results for men and women:

Among the teenagers, the best appearance for the Greek colors was made by Artemios Tzovanis (AOX Aegaleo), who reached the scoreboard of “64”. For the board of “32”, he was defeated 15-14 by Chen (Taipei). Within the first hundred, Sotiris Gerosideris (GE Florina) also completed his attempt, while a total of eight out of 12 Greeks qualified for the main board from the qualifying round.

In the juniors, the march of the four Greek teams ended quite early. The first team was the only one to make it to the board of the “32”, with a victory over the fifth team Turkey (45-13), but then they could not overcome the obstacle of Poland who easily prevailed with 45-29.

The results for the Greek colors:

With very good placings in the junior individual, the European U17 swordsmanship cups in Nuremberg and the U17 saber championships in Sofia were completed for Greece.

Stavrina Garifallou stood out, once again, in the European Cup, as she took 12th place among 270 athletes. She qualified undefeated from the qualifying round and passed without a fight on the board of “128”. She then defeated Hungary’s Haroni 15-5, Poland’s Plaza 15-4 and Poland’s Wojtas 15-4 in quick succession before losing to American Chen 15-11 for a place in the last eight.

In fact, it should be noted that only athletes from the USA, who competed in the European Cup out of competition in terms of rating, made it to the final eight. Among the European gymnasts, Garifallou was third behind Hungary’s Kollar (ninth) and Latvia’s Kozlova (11th), which means that she will comfortably maintain her first place in the European junior rankings and, in fact, will add 24 new grades in her harvest.

Of the remaining Greek entries, Iliana Bouzika (GE Florina) and Eleni Ballou (AOX Aigaleo) finished within the top 100, while nine of the total of 16 were able to pass the qualifying round.

In the final match with the 15th place trophy, they prevailed over the third team Germany with 45-38.

The aggregate results for the Greek colors: