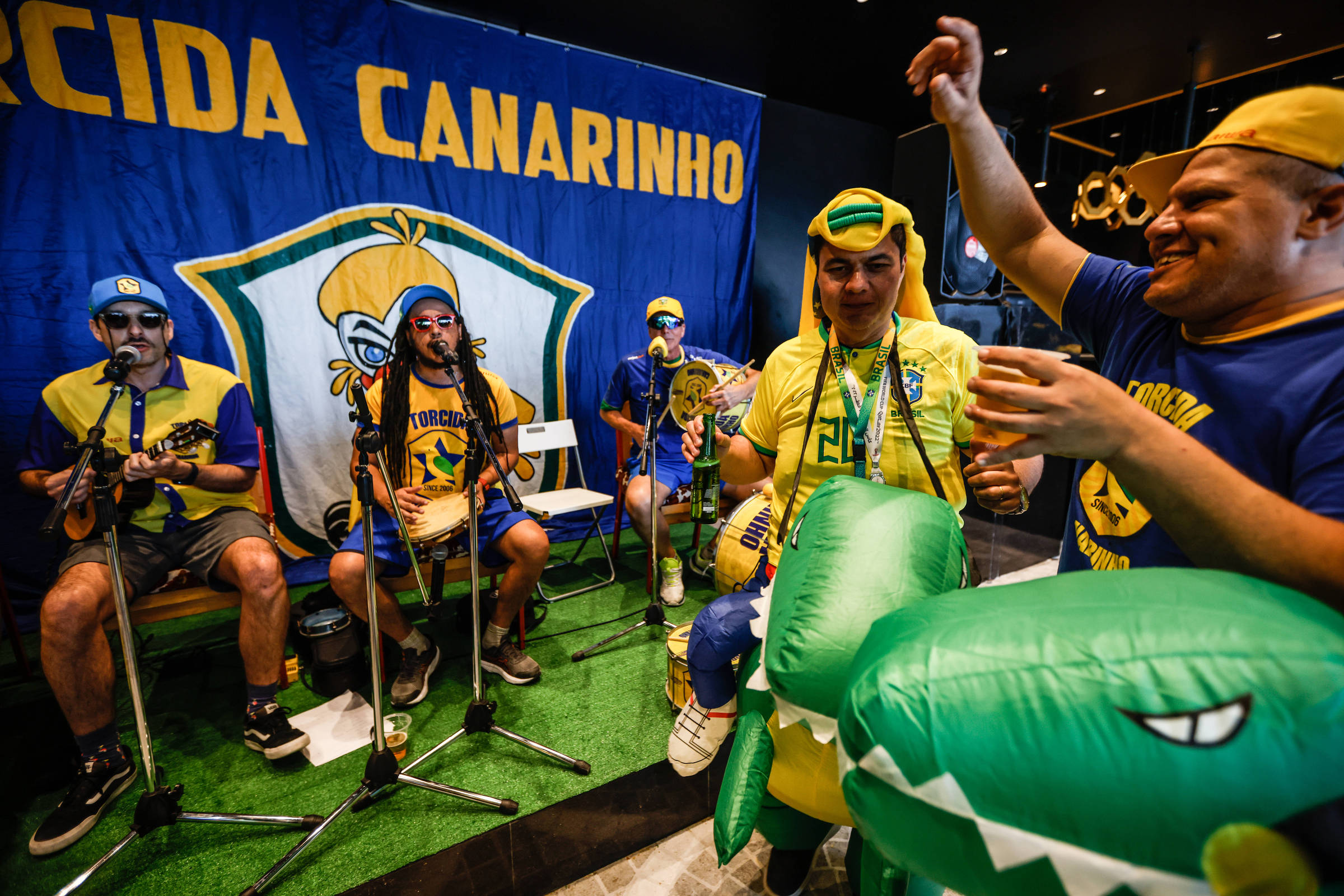 Brazilian fans try their best and bring feijoada, barbecue and samba to warm up in Qatar

To keep the animation going until the debut of the Brazilian team, this Thursday (24th), against Serbia, the fans in Qatar went for the feijoada triad, barbecue and samba circle. All just a few meters from the beach.

She, the beer, accompanied the feijoada, which did not have pork. Warm up at Lazaros Beach Lounge, space in the luxurious Waterfront Hotel Apartments, in Lusail, in the capital Doha.

The choice of location was strategic. After the party, the organizers intend to head to the stadium, about four kilometers away.

To attract the public, caps and T-shirts were offered to the first one hundred, in addition to discounts on the account and on the Uber ride to the location.

Civil servant Leandro Molina, 28, left Brazil without knowing that he would find this scenario in Qatar.

“I’m almost crying with joy. I thought I wasn’t going to have anything and it has everything we like”, he says.

Expectations for the Cup are high. For him, no selection is equal to the Brazilian. “You have to play seriously, without high heels. If you play, we are the favorites.”

From the beginning there was samba, but at 4 pm (local time) the live music started. The public guaranteed their glass of beer in the midst of Brazilian flags, synthetic grass on the ground and an almost life-size cardboard Zeca Pagodinho.

There were so many people that, three hours after the start of the event, the checkout line stretched along the beach. A long neck beer cost 45 Qatari Rials (R$65), and the feijoada dish, 115 (R$167).

Some defied the country’s rules, which guide avoiding showing shoulders and clothing above the knees, and risked swimming trunks and bikinis. For many, tennis has given way to flip-flops. It was difficult to keep the sneakers on with the temperature close to 35OÇ.

Those who go to the beach had the famous Hotel Lusail Katara, known for its horn-shaped spikes, within reach. On the sand, the tables were occupied by members of the crowd, including Brazilians and people of other nationalities.

Retired Wagner Roberto Pereira Borges, 64, took advantage of the heat. For him, tonight’s game (local time) will be the most difficult of the group stage for Brazil, although he believes in victory.

The team tries to dribble the zebra that has already caught Argentina, defeated by 2 to 1 by Saudi Arabia, and Germany, who also lost 2 to 1, to Japan.

Borges believes the team learned their lesson and being the last favorite to start helped.

“This is an advantage for us, mainly because Brazilians suffer a lot emotionally, so they have to be very focused, well emotionally balanced to play a good game and bring a great victory to our country.”

For coach Tite, the unexpected victory of the Saudis over Messi’s selection serves “as analysis and reflection”. In order to maintain the concentration of the athletes and not allow external factors to shake their emotional side, the captain chose to keep the training sessions closed.

Big name of the selection, Neymar was not unanimity among the fans.

Lawyer Fernando Xavier, 27, is not a fan of the Paris Saint-German striker, but says the player is an important piece, although he does not consider the selection dependent on him.

“What really matters is Neymar scoring a goal and us winning the sixth”, he says. “He’s an ace on the pitch and will make the difference for Brazil today, God willing.”