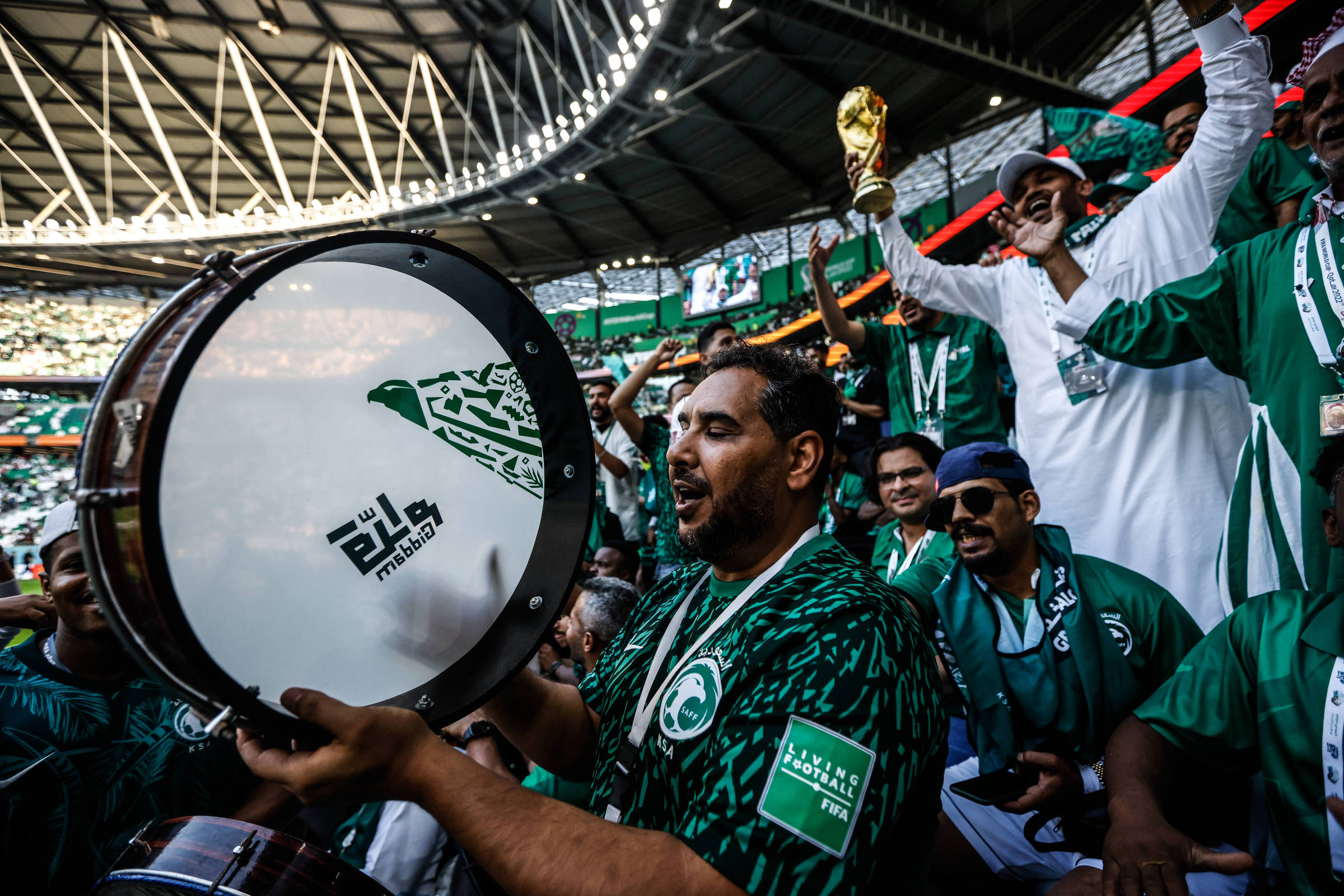 With a mix of traditional and modern, Saudi Arabia fans steal the show

The music sticks like gum. She dominated the Doha metro this Saturday (26) to Education City station. It spread along the access roads to the stadium of the same name.

“Hey, hey, hey Saudi, hey Saudi”, is the simple lyrics, but with a melody that is hard to forget.

The song is the alliance of the third most numerous fans of the World Cup and the one that draws the most attention in Qatar with its national team.

“It’s become a fever in the country. After what happened in the last game, a lot of people want to come to the World Cup, but they can’t get tickets anymore”, says Raeem Khan, 29.

What “happened in the last game” was a historic upset. On the other hand, Saudi Arabia defeated Argentina 2-1 and ended the first round at the top of Group C. A victory against Poland would mean an early classification for the round of 16.

“May God be on the side of the greens”, the Saudis also sang repeatedly, in allusion to the color of the country’s uniform and flag.

It didn’t work out this time. The team created chances, missed a penalty and fell to Poland by 2-0. If the result was not repeated, it was not because of their fans.

Part of the Education City crowd showed up to try to make up for lost time and continued to mourn the absence against Argentina. The trip to Doha, made by car by most, was to be able to say that they were part of history. Perhaps belatedly, but they did.

“I really regret not coming. In Riyadh [capital s audita], This is a very popular topic. And you don’t even have to travel far to see our team in the Cup. I can’t believe I didn’t come against Argentina! In truth. It’s a sadness that doesn’t go away,” Mohamed Abudawood, 35, can’t stop complaining.

The journey from Riyadh to Doha by car is 575 kilometers. The only setback is the need to change the Saudi vehicle, on the border between the two countries, for another one with a Qatari license plate.

The two royal families have a complicated diplomatic relationship. Until 2021, there was a trade blockade by other Arab nations, led by Saudi Arabia and the United Arab Emirates, on Qatar due to suspected financing of terrorism. While the embargo was in place, crossing the land border was nearly impossible.

Abudawood almost missed the match against the Poles in Doha. He was encouraged by wife Nogood Elkheaeagy, 29, who predicted even greater regret if her husband didn’t see the team at the Worlds. They were sitting side by side at Education City stadium.

The confrontation with Argentina did not draw attention only for what was seen on the field. The Saudi crowd silenced the South American crowd. It sang louder and louder. She was awarded a performance for posterity. Against the Poles, the performance of the players may not have been repeated. But the fans, yes.

According to the Supreme Committee for Delivery and Legacy, responsible for organizing the tournament, Saudi Arabia was the third country that bought the most tickets. There were 123,228 of the 2.7 million traded. It was behind only Qatar (947,846) and the United States (146,616).

They could be more if they suspected what would happen at the premiere.

“I decided to come after what happened against Argentina. After that result, all of Saudi Arabia wanted to be here”, believes Ahmed Alnawiti, 34, alongside his wife Aysha, 35. They usually attend matches in the local league. World Cup game, this one against Poland, was the first.

Saudi Arabia lost on the field. In the tribunes, it was a new massacre. The Arabs didn’t let up even in the worst moments, like Piotr Zielinski’s goal or when Aldawsari missed a penalty at the end of the first half. Fanaticism just couldn’t resist Al Malki’s mistake that gave Lewandowski his first goal in World Cups and the 2-0 final. But wanting them to stay excited after that was expecting too much.

In Qatar, the Saudis present a crowd in which men in white tunics are sitting next to others with the green of the national team. In which women in veils or burkas are neighbors with others wearing make-up and wearing jeans.

“I’m used to seeing it on TV, but after the victory against Argentina I had to come to the stadium. It was something incredible”, says Aya (she did not give her last name), 19, excited alongside her two brothers and a friend, all looking the same age. She has lived in Qatar for 14 years.

After the selection beat the South American team in the debut, King Salman declared a national holiday in Saudi Arabia. There was an expectation that the same could happen this Sunday after a new positive result against Poland. Did not happen.

“For those who lived through the last World Cups, when we only entered as extras, living here is magical. Even if we lose, we will reach the last round with chances”, defined Raeem Khan.

He’s right. Even a draw with Mexico, depending on the combination of results, can take the team to the round of 16. This means that Saudis will cross the border en masse, once again, for next Wednesday’s departure (30).