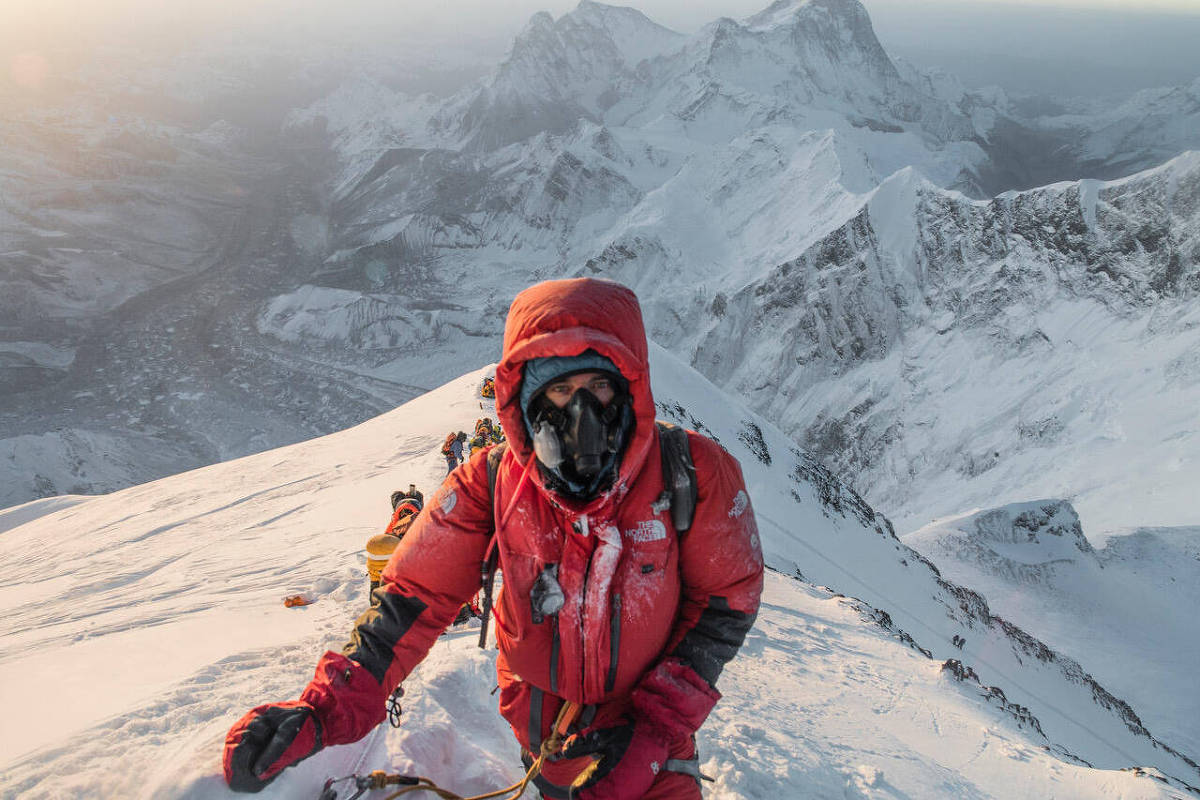 Graduated in pure and applied physics from Unicamp (University of Campinas) and having started his professional career in a particle accelerator, Roman Romancini, 47, is himself an accelerated citizen. Practicing sports from an early age, ranging from swimming to triathlons, from snowboarding to cycling and, from there, to mountaineering, the information technology executive, now CEO of Mobicare/Akross, who has lived and worked in several countries, is a determined and full of plans. After spending nearly a year at the shipyard in 2011 due to being run over by a car that the doctors thought would, at the very least, leave him with a limp for the rest of his life, and after overcoming a thrombosis and cancer that broke out in the middle of the recovery process physics of the accident, this Goiás native from Cristalina, a town close to Brasília, was the 18th Brazilian to climb Everest, in Nepal, precisely at that time when the photo of the absurd queue of mountaineers on the access to the summit impressed the world.

And if it is more and more frequent to show Brazilians who went there and fulfilled the goal of climbing the highest mountain on the planet, with its 8,849 meters, it is less common for someone to confess that their climb, on May 16, 2018, began seven years ago. rather, inside an ICU (Intensive Care Unit), “with an anesthetized body, a drugged mind and one leg 20 centimeters longer than the other”.

Romancini’s story, told by him and his partner Rafael Duarte in the book “Beyond dreams —From bed to summit, the story of the man who defied the impossible”, which is being released by Valentina, can be summed up in one of his favorite mantras: “Dream big, start slow and scale fast.” The account, which escapes the pitfalls of epiphanies and spiritual revelations of many books of the genre, shows a little-known side of the most extreme mountaineering: the administration of the conflicts that arise between answering the call of the mountains and the pain of leaving behind the agonized family. who doesn’t always understand what his wife, pediatric dentist Daniela Romancini, 47, who prefaces the text, calls a “factory defect” —the lust for the next challenge ahead (or, in this case, above, below, and even within the ‘Water).

The account of his mountaineering journey is one that you cannot put down from the first to the last page. He tells in a light way and with clear details the many perrengues involved not only in each achievement, but also in the frustration of those attempts that end up having to be aborted for the most varied reasons, such as a calculation error, an untimely piriri or a weather surprise.

The mountain, it is known, has its whims. They often cost the life of the most experienced mountaineer, like that of his friend and partner on many journeys Vitor Negrete, who died in 2006, hours after becoming the first Brazilian to climb the summit on the north face of the mountain and without assistance. of supplemental oxygen tubing. It is to him that Romancini dedicates many of his steps on his way to the top of the world, including the climb to Ama Dablan, a 6,812-meter mountain considered the most beautiful in the Himalayas and which he was the first Brazilian to climb.

Among the frustrations narrated by the author is having to give up completing the 6,194 meters of Mount Denali (or McKinley), in Alaska, when there were only 20 meters left for the top. The mountain, which is part of the “Seven Summits”, the group of the highest mountains on each continent, received him with strong gusts of wind that forced the group to turn back at the risk of being blown away. “The only thing I thought was ‘What do I need to do to not go flying?'”, says Romancini, who hurled himself down the mountain as soon as the weather gave a brief respite, not without almost literally plummeting over an abyss when he was pulled in the path by a colleague who slipped.

“That expedition brought me great lessons that I also apply in my professional life, the most important being discernment. As paradoxical as it may seem, I realized that my biggest goal in climbing a mountain is to get back home. only halfway there”, reports Romancini, who sums up this experience as “the success of defeat”.

If the ascent to the emblematic Everest has already been accomplished (although he intends to do it again in winter), Denali’s is still on Romancini’s list of plans. He spoke to the blog as he prepares to complete what he calls the “True Explorer Grand Slam”, or the great circuit of the true explorer, which includes, in addition to the seven summits (Everest, 8,844 meters, in Asia; Aconcagua, 6,962 meters in America South; Denali, 6,194 meters, in North America; Kilimanjaro, 5,895 meters, in Africa; Elbrus, 5,642 meters in Europe; Vinson, 4,892 meters, in Antarctica; and Kosciuszko, 2,228 meters, in Australia, of which he has already covered five , but “only” four in the winter, as you intend, to complicate things a bit), the 14 mountains over 8,000 meters (of which 13 are missing) and the north, south and altitude poles —the latter, considered precisely the Everest, that is, it’s paid off, but it remains to go back in the winter (yes, he intends to go back there). As a bonus, it will include the “Seven seas” project in the list, which plans to complete an ultramarathon (100 kilometers) of swimming in every portion of water around the planet. Is it accelerated you said? So.

“It’s a life project where the most difficult thing is always leaving home”, admits him, father of two children (Giulia, 18 and Vitor, 14) who accompany their mother on every journey. “It’s too painful to leave and leave them behind, the hardest part is with them”, he says, explaining that, after the signal of his geolocation equipment failed in the middle of the access to the summit of Everest, indicating to the family a possible fall, he had to re-discuss the relationship and adjust the dialogue when he got home, in Rio de Janeiro. “There was a lot to talk about, digest, redefine,” he explains.

Judging by Romancini’s plans, the subject for DR is what will not be lacking for the next few years for the couple.

Beyond Dreams – From Bed to Summit: The Story of the Man Who Defied the impossible”176 pages Authors: Roman Romancini and Rafael Duarte Publishing company Valentina