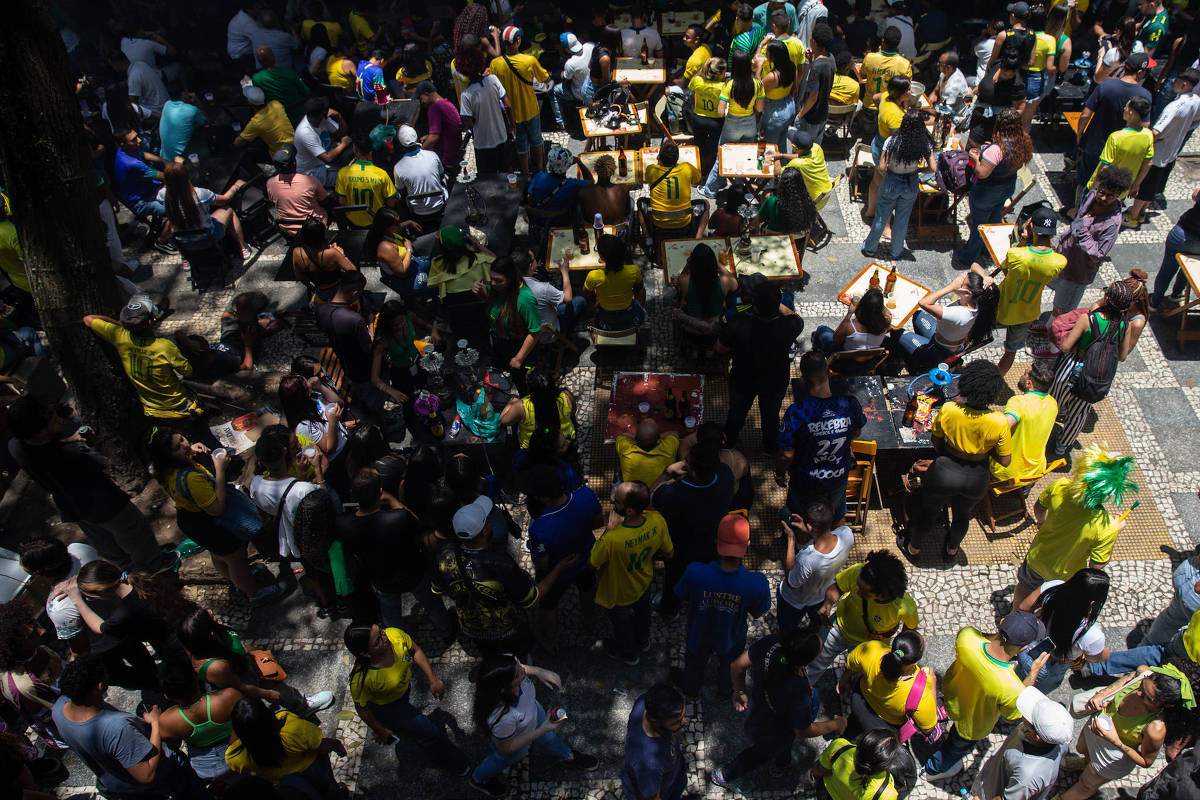 Brazil vs Croatia has a Carnival atmosphere in the streets of SP, despite the defeat

The clock didn’t even strike noon this Friday (9) and the tables in pubs and restaurants on Rua Dom José de Barros, in downtown São Paulo, were already busy and full of empty beer bottles.

Clusters of people wearing yellow, green and blue shirts crowded the street, which you could barely walk down without bumping into someone.

Everyone was there to watch the match between Brazil and Croatia in the World Cup, in a match that started at 12h. Street vendors took advantage of the movement to sell barbecue and drinks, and the smoke from the skewers mixed with the smoke from the hookahs consumed by most of the young people there, sweating in a 30ºC heat.

“It’s like an out of season Carnival,” said Julia Ferreira, 19, who works at a telemarketing company near Dom José de Barros and took a break to watch the match on TVs installed in establishments and on the sidewalks. “After politics, only the World Cup brings everyone together like this”, said friend Sabrina Ribeiro, 18 years old.

The Brazilian team disputed a place in the semifinals of the competition, but lost on penalties and is out of the Cup. The match schedule meant that many workers took a break in the middle of the day to follow the selection.

Still wearing a badge around her neck, saleswoman Denise de Paula Nascimento, 35, got together with ten other co-workers to watch the match at a bar in the region.

“It’s just bad to have to go back to work. We drink and then have to go back, it’s torture”, he says. She says that, on days when the team played at 4 pm, it was easier to follow the match, as everyone was released earlier to go home.

A few meters away, in Praça Dom José Gaspar, more people with national team shirts stretched out their lunch from work and filled the bars and restaurants, equipped with makeshift screens.

Among them was style consultant Andreza Ramos, 27, who interrupted her home office to secure a table at the bar with friends. “We needed a laugh, a ride like that, especially after the pandemic,” she says.

“But it’s really sad to have to go back to work after the game. It’s going to be worse than losing the hex,” said friend Caroline Molina, a 28-year-old software developer.

Outside the concentration of pubs and restaurants, most of the streets in the central region were almost deserted, with shops with their doors down and few cars or buses circulating along the streets.

The scenario was the same in Baixo Augusta, and you could only see some movement, albeit minimal, inside the bars and restaurants that had televisions and received customers for lunch.

A little further up, on the corner of Rua Augusta and Matias Aires, the atmosphere was livelier, with people filling the street. Minas Gerais food bars and restaurants displayed signs with a minimum consumption of R$50 per person on game days.

Salesman Eduardo Amarante, 27, who works in the Avenida Paulista region, got together with friends for a drink while watching the match. “Drank a little to calm my heart.” But soon after departure, he too would have to go back to work.

There was also a lot of movement in the pubs around the church in Largo de Santa Cecília, in the center of São Paulo, with tables and chairs spread out on the sidewalks and fans who were tense with the match, still at zero to zero in the second half.

Everyone cheered when Neymar scored the first goal for Brazil, only to be tense again after a few minutes with the close match and the goal scored by the Croatians.

“The game was excellent, but suffered”, commented the painter Julio Cesar, 43 years old. He accompanied the bids alongside his colleagues who were still wearing their uniforms, a group of bricklayers working on a construction site in the region.

With the start of the office at 9 am, they were released for a break and soon after would return, to continue construction until 4 pm — but there was time to have a beer.

Retired friends Rosimere Marques, 62, from Carmo do Rio Claro, and Fátima de Castro, 68, from Campinas, took advantage of their time in the capital to accompany a friend who was undergoing a medical examination in the Santa Cecília region to watch the game in a from nearby bars.

While they narrated the match to their friend through messages and photos, they had beer and snacks at a table that they decorated with flags. “We are praying for her and rooting for the game,” they said.

“The problem was Croatia’s goalkeeper,” said Fátima. “But I’m Brazilian and I never give up”, commented her friend Rosimere.

Many of the workers planned to extend the celebration after work, in case the Brazilian team won. The crowd was for the sixth, but also for another break from work in an upcoming match. With the end of penalties, the atmosphere of animation that recalled that of Carnival changed to one of dismay. The way was to go back to work, a little sadder.