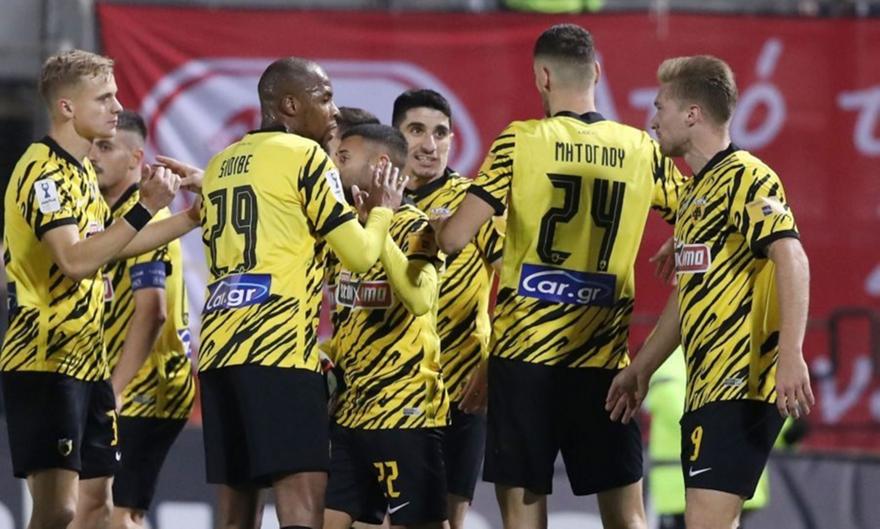 AEK finished the job in Serres with “hot” Mandalo!

More in a while…

AEK didn’t take long to take the reins, with Matias Almeida’s team quickly starting to pull off one phase after another. Two big moments at the beginning, with Goat to show reflexes on his foul shot Fernandes (7′) and at its head Cumber (8′).

The “Union” with Fernandes as the main performer tried to get things from the static phases with nice combinations (like the 4′) but mainly from combined football. In the last way (combination actions), his phase came 13′ with his shot Gacinovic but also the goal, at 21′: Excellent collaboration from the left, with Latch to play on Gacinoviche to Cumber and the Swiss midfielder to give at the height of the small area to the Greek ace who executed with one. A wonderful triangle that brought the 0-1.

The “yellow and black” – as usual – immediately tried for the second goal, having as the main exponent of their efforts Gacinovic. The Serbian ace, as it was seen while competing in the match against Ionikos, was in very good physical condition. However, he looked to be looking for the goal, reminiscent of Zuber when he returned from injury. In the 29′ threatened from the height of the large area, while at 34′ caught a very misplaced finish.


The hosts – who were trying not to have a passive role – threatened with his cross-shot Pantekidis in the 31′. Afterwards, the pace started to drop, with AEK having another good moment, at 42′ with his head Van Weertwith the first part ending at 0-1.

Without changes, but with… a full spectacle, the second part began. Specifically with one goal for each team! Initially, at 49′ Panserraikos tied the match. Terrible energy of him Columbine who won low, made… roulette and broke right to Saidwho found him on the second post Katsantoni who scored with a finish on the move.

However, AEK responded to the… caps (51′) in the first goal he conceded in the institution. Sidibe produced one of his many good crosses in the match, finding the Latchwho scored with a powerful header.

The several changes that followed threw off the pace. It should be noted that Tzumber continued to play in the attacking duo (on the side of Kosidis) even after the entry of Araujo, who went to the left, which also shows Almeida’s intentions. ΄

And where the match seemed to fade away (with AEK of course always having the intention to create a situation), it came 1-3 in 80′. Kosidis broke into Knife, who attempted a powerful shot from outside the area, with the ball hitting the right post and ending up in the net. This was also the final score, although in the last minutes o Kosidis he tried to add his name to the list of scorers, but Katsikas repeatedly stopped him.

Facebook
Twitter
Pinterest
WhatsApp
Previous article
Panathinaikos with… a heart of gold, escaped the disaster and made it to the semi-finals!
Next article
Drew Barrymore on Leonardo DiCaprio: He’s a “barbander”, he goes to clubs and he’s 48