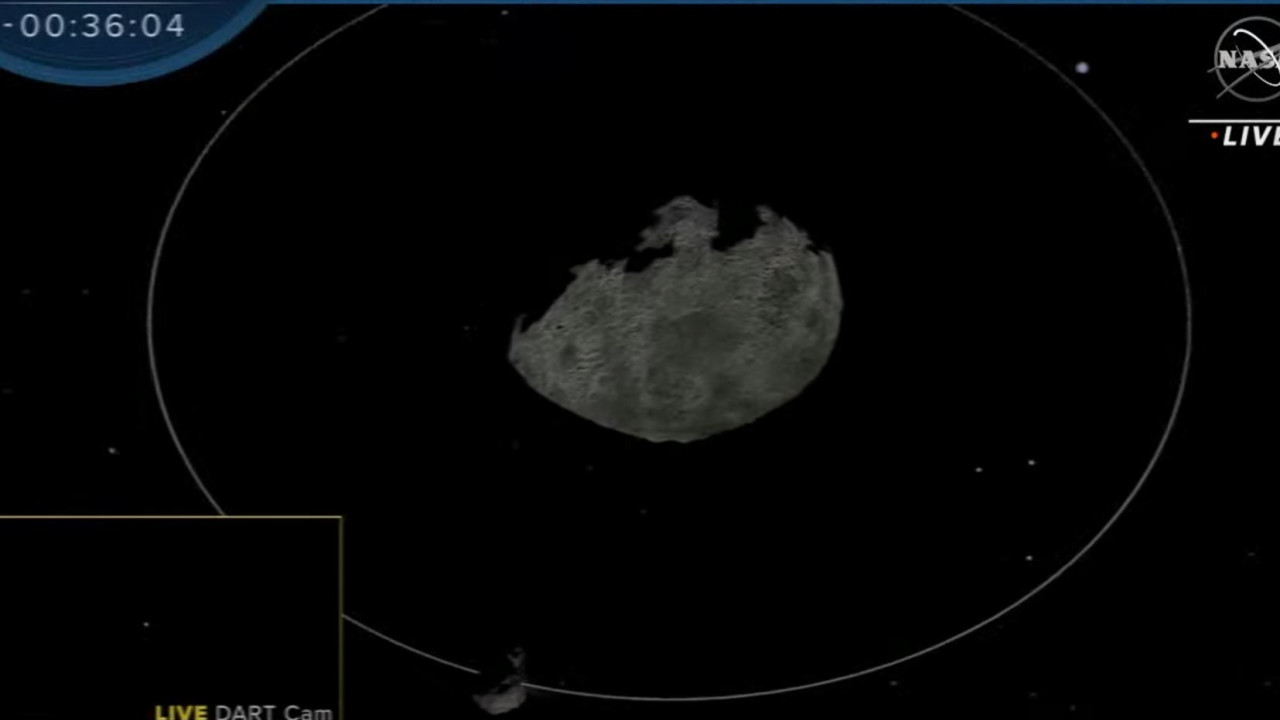 The first image from the explosion after DART hit asteroid Dimorphos

The kamikaze craft, slightly smaller than a car, crashed at a speed exceeding 20,000 kilometers per hour onto the asteroid

NASA has released some of the first snapshots of the progress of the asteroid impact experiment with the image just after the Double Asteroid Redirect (DART) spacecraft hit Dimorph.

NASA’s spacecraft, the US space agency, has deliberately crashed into asteroids to alter its course with the power of kinetic energy, during an unprecedented mission to help humanity learn how to protect itself from a potential future existential crisis. threat to her.

The kamikaze craft, slightly smaller than a car, fell at a speed exceeding 20,000 kilometers per hour on the asteroid, at the time predicted (at 02:14 Greek time, early Tuesday, September 27, 2022).

NASA teams at the mission control center in Maryland erupted in cheers at the time of impact.

A few minutes earlier, the asteroid Dimorphos, about 11 million kilometers from Earth, was beginning to grow slowly in the spectacular images transmitted directly from the spacecraft’s camera. The gray irregular surface of the rock was clearly visible.

The impact of the rocket on asteroids was successful and even went better than expected, Kleomenis Tsiganis, Associate Professor of Dynamical Astronomy and member of the research team for the Double Asteroid Redirection (DART) spacecraft, summarized speaking to SKAI.

“It is the first planetary defense experiment but if we look at it in a little more historical depth it is the first time in the history of mankind that with human intervention a celestial object changes course. This is certainly unprecedented.” specifically pointed out.

He pointed out in particular that there are still some images and some data which are being processed and therefore have not been announced but in any case the experiment seems to have succeeded as the asteroid was hit hard.

“There is a big change in brightness, there are traces of debris that have gone a long way,” he explained, adding that within the next few days we will see very impressive images and some have already been released on twitter.

A similar experiment, as he clarified, had never been attempted before and regarding the degree of difficulty he characteristically said “I’ll tell you the numbers and you’ll think about it… The requirement was that the aiming had an accuracy of 10- 15 meters when the object we’re targeting is currently about 11 million kilometers from Earth and measures 160 meters across. You understand that we’re talking about a billionth, the order of magnitude of accuracy.” he said characteristically and added that this is possible by starting the mission a year before and only making corrective moves along the way.

It is worth noting that the professor mentioned that during the last hours of the mission there was no longer human intervention and the navigation was done through an automatic smart navigation system which was based on the camera of the boat itself.

“Everything worked as expected, as I said, the target was exactly where it should be” he underlined among others.

Facebook
Twitter
Pinterest
WhatsApp
Previous article
Golden Dawn trial: On October 7, Magda Fyssa testifies
Next article
The data for Greece ahead of the draw for the Euro qualifiers and the possible opponents