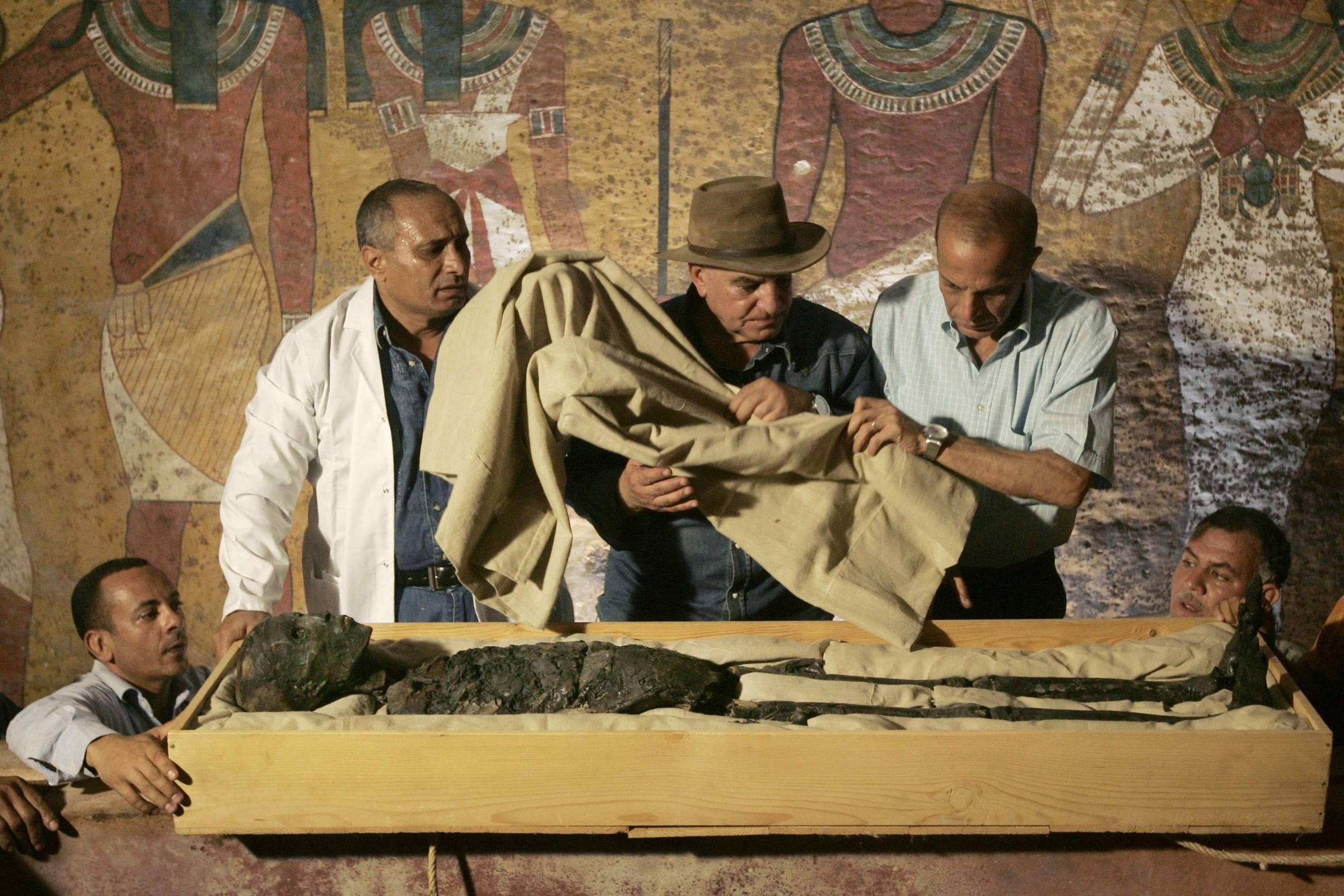 As far as we know, Tutankhamun’s reign (1341 BC-1323 BC) was brief and marked by failures. He died when he was still a teenager and left no heirs, ending his family’s rule over ancient Egypt. Ironically, however, no other pharaoh has provided such a vivid dive into the Egyptian past as he has, with a seemingly inexhaustible wealth of detail.

The treasures that accompanied the so-called boy pharaoh on his journey to the Beyond began to surface a hundred years ago, in November 1922. It was then that the British archaeologist Howard Carter, accompanied by his financier, George Herbert, Earl of Carnarvon, began exploring the young monarch’s tomb in the Valley of the Kings (southern Egypt).

The tomb was not exactly intact, contrary to what many people imagine. The heap of objects in the outermost enclosures of the structure, as well as the presence of fragments of limestone, indicate that the site had been the target of looters relatively shortly after the pharaoh’s death.

Luckily for future Egyptologists, Bronze Age thieves took little, and the tomb was hastily resealed shortly after the thefts. Because it was built on the floor of the Valley of the Kings rather than on the adjacent rocky slopes, it ended up being completely covered by sediment and was forgotten until Carter’s team rediscovered it in the 20th century.

The contents of the tomb “is a micro-universe of the life of a pharaoh and a privileged teenager in ancient Egypt”, sums up archaeologist Márcia Jamille, who holds a master’s degree from the Federal University of Sergipe (UFS) and creator of the Archeologia Pelo Mundo YouTube channel.

“These are objects with religious and funerary purposes, but we also have examples of furniture, toys, clothes. Even a lock of hair from Queen Tiye, the pharaoh’s grandmother, was found inside a box, carefully stored. There were also wrapped foods”, he says. .

Another detail that perhaps explains the somewhat cluttered appearance of the interior of the tomb is the fact that it is relatively small and modest – at least in relation to what is expected for a pharaoh. This could indicate that the tomb was originally built for someone else, a few rungs below Tutankhamun in the Egyptian hierarchy, and then repurposed to house the young king’s remains.

In any case, the monarch’s tomb, designated by the acronym KV62, is one of the only examples of a pharaoh’s burial that is practically intact. According to Márcia Jamille, the only comparable discovery made to date is the burial of King Psusenes 1st, discovered in 1940, with a gold death mask and a silver sarcophagus.

Psusenes, however, had the misfortune of being buried in the Tanis region, a relatively humid area in the delta of the Nile River. As a result, many artifacts associated with the funeral ended up deteriorating. On the other hand, the dryness of the Valley of the Kings perfectly preserved more than 5,000 objects deposited there with the mummy of Tutankhamun, including those made of wood and leather.

On the one hand, the huge list of funerary goods was a way of providing the pharaoh with all the necessary resources for his stay in the world of the dead. A clear indication of this is the presence of 413 “shabtis”, statuettes that, according to Egyptian belief, would magically act as small servants of the deceased in the Beyond. For this, it was common for them to receive inscriptions from the collection of mystical texts known as the Book of the Dead.

On the other hand, artifacts, inscriptions and the king’s mummy provide clues, not always easy to interpret, about the trajectory of his dynasty and the political situation in Egypt during his brief reign.

It appears that Tutankhamun became king at the age of eight or nine, dying at age 19. He married Anchesenamon, his half-sister, a common practice in Pharaonic Egypt. Two female babies, one premature, were mummified and buried with the pharaoh.

DNA analyzes made with material obtained from mummies are still controversial due to the impact of the mummification process on the genome. Even so, the data existing until today indicate that the babies were the pharaoh’s daughters and that he was the grandson of Amenophis III, one of the greatest monarchs in Egyptian history. Still according to these analyses, Tutankhamun’s father would be buried in tomb KV55 (also in the Valley of the Kings) and would be the controversial pharaoh Akhenaten.

Another clue in this direction is in the sumptuous throne found in the tomb. It represents Tutankhamun and his queen sister, but behind him is an inscription with what appear to have been the original names of the royal couple: Tutankhaten and Anquesepaten. The key to the mystery is the ending of these names. “Aton”, the name given to the sun’s disk, was the favorite deity of Pharaoh Akhenaton (hence the designation he adopted).

Akhenaten promoted a great and unpopular religious reform, in which Aton became a kind of unique god of Egypt, while the cult of the other gods became neglected or even persecuted.

With the death of his probable father, the heir decided to return to the traditional Egyptian religion (or was forced to). Hence the change to Tutankhamun, incorporating the name of the god Amon into the royal designation.

The last mystery has to do with the physical characteristics of the pharaoh. It is known that he was 1.67 m tall when he died, but analysis of the skeleton would also have revealed a range of health problems, such as spinal deficiencies, bone malformation in one foot, malaria and a serious fracture in the leg shortly before he died. to die. The presence of walking sticks on the grave would suggest that he had limited mobility.

The problem is that the diagnosis is uncertain due to the severe damage the body suffered after mummification, says Márcia Jamille. “There’s even a joke in Egyptology about what his new cause of death or state of health will be after each new documentary.”

As for canes, they were also seen as a sign of authority, and not necessarily a mobility deficit. In addition, the tomb is also full of weapons – a sword forged with iron from a meteorite, bows, arrows, shields, chariots and “state-of-the-art” armor made of finely worked leather. It could also be an indication that the young pharaoh was at least capable of training for combat.