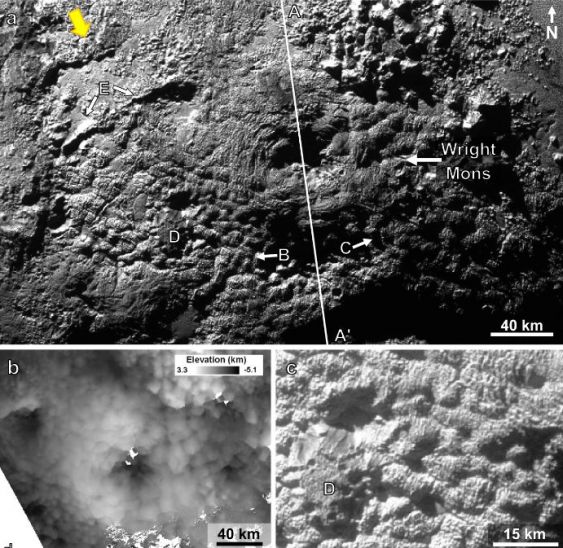 Frozen volcanoes on Pluto at an altitude of up to 7,000 meters – See photos

Evidence of recent activity from large icy volcanoes on the dwarf planet Pluto is visible, as revealed by the analysis of images sent to Earth by the New Horizons (New Horizons) spacecraft of the American Space Agency (NASA).

Cryo-volcanic activity (ice-dripping volcanoes) has been observed in several places in our solar system. Pluto has a rocky core, but previous estimates suggested that the heat inside it – and therefore volcanic activity – would be very low for most of its history.

The researchers, led by Kelsey Singer of the Colorado Southwest Research Institute, published in the journal Nature Communications, analyzed images of an area southwest of the icy Sputnik Planitia, which covers a large area of collision area of ​​about 1,000 kilometers. Examination of the geomorphology and composition of the ice-covered area shows that it was created by cryop volcanic activity.

In the area there are many volcanic cones up to seven kilometers high and 10 to 150 kilometers in diameter. For example, the volume of Pluto’s so-called Wright Mons is similar to that of Mauna Loa, Hawaii, one of the largest volcanoes on Earth. Scientists estimate that the creation of the area would require several different points of cryop volcanic activity and a large total of icy material ejected from the volcanoes. Also the area has no impact craters, unlike other areas of Pluto. That’s why researchers concluded that cryopreservation activity in the area is relatively recent in Pluto’s history and an indication that the interior of the small distant planet may have more heat than previously thought.