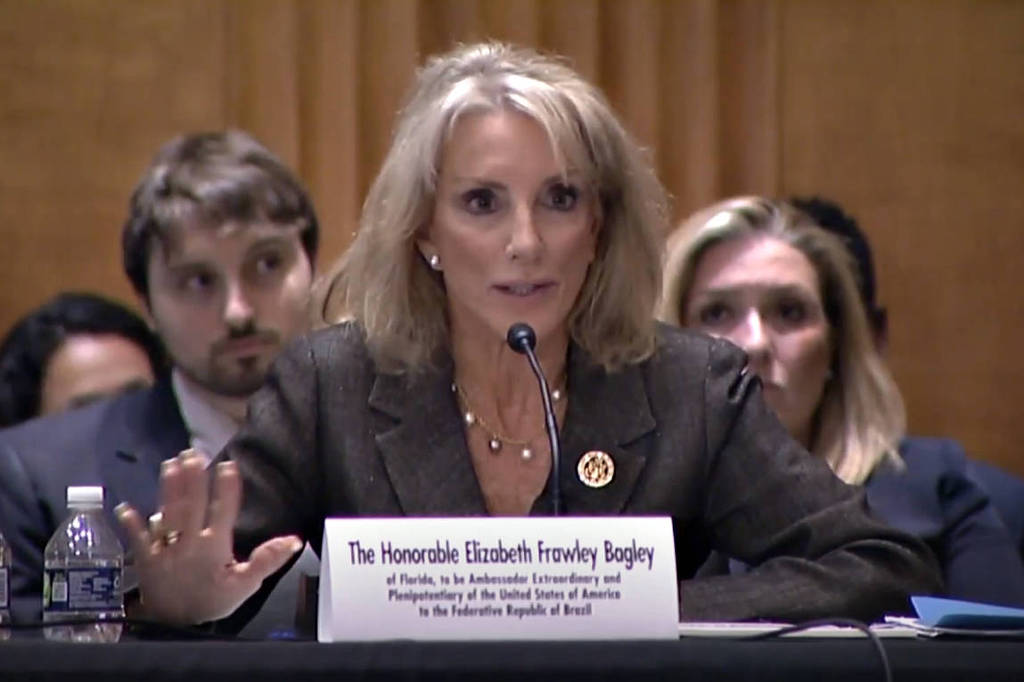 Senate committee blocks nomination of US ambassador to Brazil

The US Senate Foreign Relations Committee did not approve the appointment of Elizabeth Bagley, nominated by the Biden administration to be ambassador to Brazil. The vote ended in a tie at 11 to 11 — a result that, according to interlocutors, detracts from the political force of the nomination.

On Thursday (23), the summary of the progress of Bagley’s case was included the note “failed to report favorably” — the report on the decision has not yet been published. The commission documents are usually released after a few days, and the voting has been closed.

The Senate Foreign Relations Committee is headed by Democrat Bob Menendez and has 11 members from each party, which, according to sources heard by the Sheet, would have voted as a block: Democrats in favor of the nomination, and Republicans against. Thus, the indication is in a kind of limbo.

In theory, the Senate floor can approve Bagley’s name, but it is unusual to have support for nominations without the approval of the committee that handles the issue. It would be an operation at a political cost for Biden, and, in the view of interlocutors, on condition of anonymity, the president is most likely to withdraw the nomination.

The main reason for the senators’ resistance was statements Bagley had made in the past that were considered anti-Semitic. In a 1998 interview, she lamented that the “Jewish lobby” would make Democrats say stupid things, like “defending Jerusalem as Israel’s capital.”

The speeches were quoted in the hearing held in the Senate, in May. “I certainly didn’t mean any of that. It was a bad choice of words,” she said at the time. THE Sheetby email, James Risch, a Republican on the Senate Foreign Relations Committee, said that “unfortunately, statements insinuating that Jewish and Cuban-American electoral motivations are based on ‘big money’ and ‘radical opposition’ ‘ to the regime [de Fidel] Castro go against common values ​​with Brazil”.

“Brazil is an extremely important ally for the US. We share common values, especially in respect of religious freedoms and democratic ideals. Therefore, I cannot support this appointment.”

On Saturday, Bagley also said he foresees difficulties in the Brazilian elections, in October, but that Brazilian institutions are prepared to resist anti-democratic pressure. She promised to work with the Brazilian government to fight deforestation and animal trafficking, among other proposals.

“A rejection is very rare as candidates go through extensive background checks and negotiations take place before the nomination is made,” said Melvin Levitsky, a former US ambassador to Brazil.

Bagley, 69, was born in Elmira, New York, and is a longtime donor to the Democratic Party. She has worked in the fields of diplomacy and law for decades, serving as senior advisor to three secretaries of state: John Kerry and Hillary Clinton, both under Barack Obama, and Madeleine Albright, under Bill Clinton. She was also a special representative for the United Nations General Assembly and for Global Partnerships, as well as an ambassador to Portugal.

She currently owns a communications and cell phone company in Arizona.

While Bagley’s appointment is not confirmed, the US representation in Brasilia is interim headed by Douglas Koneff. Brazil has been without a full US ambassador since mid-2021, when diplomat Todd Chapman, who held the post, announced his retirement.