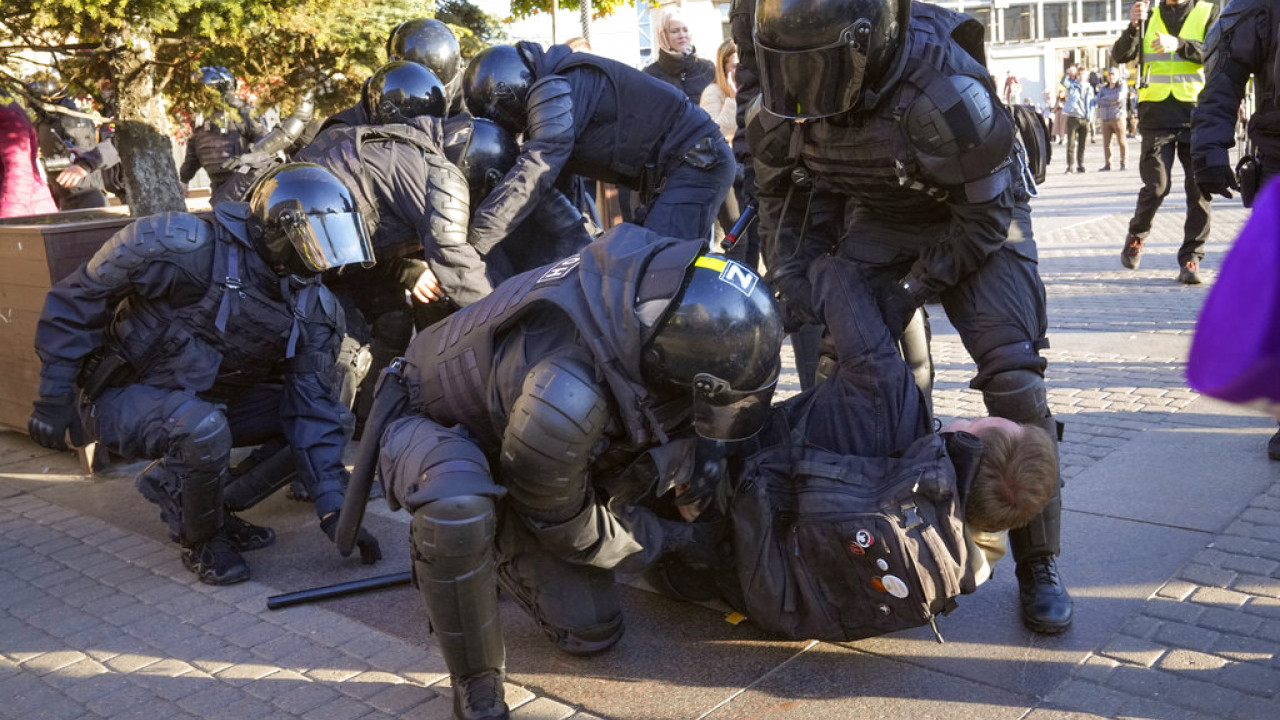 Russian President Vladimir Putin has signed into law amendments that would see soldiers who desert or refuse to engage in combat be sentenced to up to 10 years in prison.

Amid the mobilization of hundreds of thousands of reservists to fight in Ukraine, Moscow on Saturday toughened penalties for deserters and arrested hundreds of protesters, while replacing a top officer in charge of logistics for its armed forces.

Russian President Vladimir Putin has signed into law amendments that would see soldiers who desert or refuse to engage in combat be sentenced to up to 10 years in prison.

He also signed a law making it easier to obtain Russian citizenship for foreigners who pledge to serve in the army for at least a year, as Moscow appears to be scrambling to recruit more men to fight in Ukraine.

However, these measures did not discourage those opposed to partial conscription, who took to the streets again to demonstrate across the country on Saturday. At least 700 people were arrested in 32 cities, almost half in Moscow, according to the non-governmental organization OVD-Info.

Increased flow at the border with Georgia

“We are not cannon fodder!” she shouted in Moscow as police in riot gear pulled her to the side of the road. This is one of the most widespread slogans of those protesting against the sending of troops to Ukraine.

In Saint Petersburg (northwest), the country’s second largest city, Ilya Fralov, 22, held a small banner with the word “peace”. “I want to express my disagreement with what is being done (…) I don’t want to fight for Putin,” he said.

“I am against war and conscription. I’m afraid for the young people,” said another resident, Natalya Dubova, 70.

On Wednesday, the day Mr Putin announced the conscription, nearly 1,400 people were arrested.

The order to make a partial conscription, which according to the authorities concerns 300,000 reservists, caused concern among many Russians, some of whom preferred to leave the country.

Russian authorities acknowledged yesterday that there is a “large” flow of cars wanting to cross into Georgia, with around 2,300 vehicles counted at one border crossing alone.

There was also an increase in traffic at the border with Kazakhstan and Mongolia, with reports of sometimes long waits to cross.

On Thursday, the Kremlin spokesman, Dmitry Peskov, estimated that the information about the “exit” of Russians is “largely exaggerated”.

Ukrainian President Volodymyr Zelensky, addressing Russians last night, told them that their president was deliberately sending “citizens to their deaths.”

“The Russian government fully understands that it is sending citizens to their deaths,” Mr. Zelensky said, calling on Russian soldiers to surrender. “You will be treated civilly (…) no one will know the circumstances of your surrender,” he promised, speaking in Russian.

Moscow also announced on Saturday that the top officer in charge of logistics, the weak link in the “special military operation” that began in Ukraine seven months ago, had been replaced. Kyiv forces recently launched a counter-offensive that allowed them to retake large areas in the Kharkiv region (east).

General Dmitry Bulgakov, Deputy Minister of Defense, was transferred to “another position” and replaced by Major General Mikhail Mizinchev, until now head of the National Defense Control Center.

Russia also went ahead with referendums on Saturday that are expected to lead to the annexation of four regions of Ukraine that it controls in part or in whole, defying threats from the West to impose additional sanctions if it proceeds with this move.

US President Joe Biden declared yesterday Friday that his administration will impose “swift and severe” punitive measures in case of annexations, judging that “Russia’s referendums are a fraud”, “a pretext for the annexation of parts of Ukraine by force”.

The G7 countries (USA, Germany, Japan, Canada, France, Italy, Britain) urged “all countries to categorically reject these fictitious referendums” which according to them have “no legal force”, nor “legitimization”.

The Ukrainian army claimed yesterday morning that due to the low turnout, members of the electoral commissions are going to people’s houses accompanied by the Russian army in order to vote in them.

Without going so far as to denounce the votes, China, Russia’s closest partner, called for “the territorial integrity of all countries” to be respected.

Referendums in the separatist-controlled regions of Donetsk and Luhansk (east) and in Russian-held zones in Kherson and Zaporizhia regions (south) will be completed the day after tomorrow, Tuesday, September 27.

In Moscow, St. Petersburg and other cities, the authorities organized rallies in support of the votes, with flags and slogans.

On the diplomatic front, Chinese Foreign Minister Wang Yi on Saturday urged Ukraine and Russia not to allow the war to “spread” during his address to the UN General Assembly, hoping for a “peaceful resolution” to the conflict.

“They do not hesitate to declare their intention not only to achieve a military defeat in our country, but to destroy Russia,” he added.

Asked during a press conference about China’s pressure on his country to end this war, Mr. Lavrov merely said “you can say (…) that I avoided answering your question.”

Iran, for its part, has been targeted by Ukrainian authorities, who accuse it of supplying Moscow with weapons, particularly UAVs, which killed one person in a Russian attack on the port of Odesa last Friday.