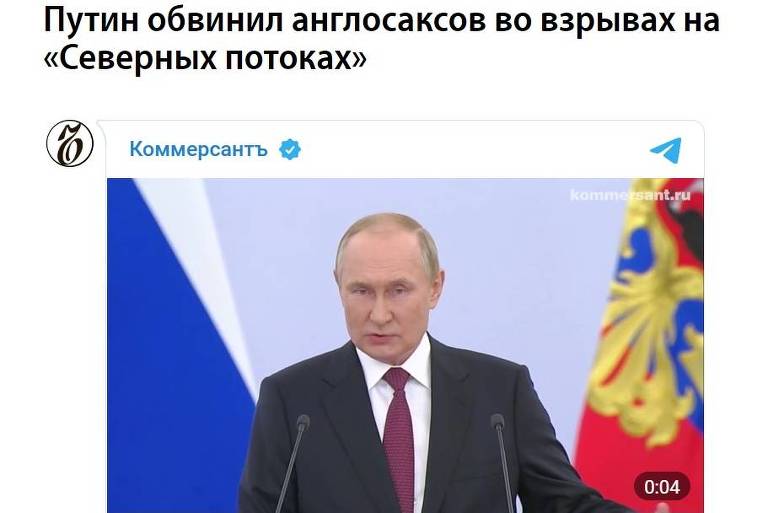 The week saw the takedown of yet another Russian news app by an American platform, with Apple removing the social network VK and its newly acquired information aggregator Zen. It gets a little more difficult to keep up with Russian media, outside of Western filters.

A news story on Friday (30) that made headlines in Russia, including in Zen, with Kommersant (below), and in the also banned RT, was that Vladimir “Putin says Anglo-Saxons organized sabotage of Nord Stream gas pipelines”.

One Western newspaper that reported was the Süddeutsche Zeitung, explaining that “the term ‘Anglo-Saxons’ in Russian can mean the Americans, the British or both together”.

Whoever Putin’s target is, the answer came from Joe Biden, who in the US only Bloomberg highlighted, as far as it was possible to observe. The American president said that “the Russians are spreading disinformation” and appealed: “Don’t listen to what Putin is saying.”

At the same time, however, his energy secretary told the British BBC that it “looks like” Russia is to blame. It was on the heels of CNN, the New York Times and Politico, among others, that for days they hinted that “Russia is suspected of sabotage”, with statements such as “Was it Russia?” or “Everything points to Russia”.

On the other hand, on Fox News there is a lot of questioning, for example, from Glenn Greenwald, talking to Laura Ingraham: “Why would Russia blow up its own gas pipeline, which gives enormous pressure power?”.

Also from anchor Tucker Carlson, with a similar argument and going further, implying that it may have been Biden, in fact. He recalls the threat he made in February and the thanks of a former Polish defense minister to the US, now, for the sabotage.

Gathered in preparation for the CP congress, Chinese coverage of the case is distant and cautious, with the Global Times reporting that “Leaks from Nord Stream fuel West-Russian information war and intensify confrontation” without risking position.

MERKEL, TO THE RESCUE

No sooner had the pipelines blown up and, in the NYT, “Pentagon plans to create new command” in Germany, scaring FAZ and other Germans.

Former Prime Minister Angela Merkel, who contained the conflict for years, was resurrected by Berlin’s Tagesspiegel (above), Süddeutsche and others with the advice to “take Putin seriously”.