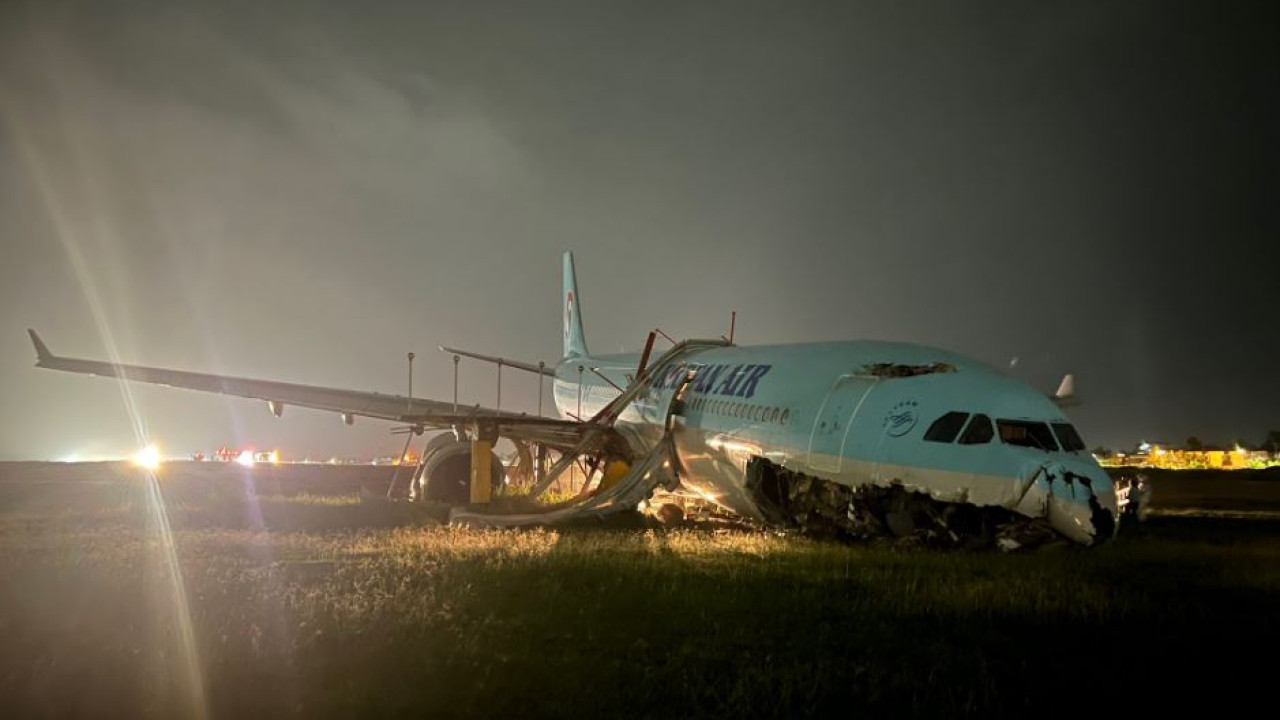 Korean Airliner Goes Off Runway – No One Injured – Photos

The Airbus SE A330, flying from Seoul to Cebu, attempted to land twice due to bad weather before overrunning the runway on the third attempt

A Korean Air Lines Co Ltd plane carrying 173 passengers skidded off the runway at Cebu International Airport in the Philippines late last night, the airline said, adding that there were no injuries and all passengers were evacuated. the aircraft safely.

The Airbus SE A330, which was flying from Seoul to Cebu, attempted to land twice due to bad weather conditions in the area before it ran off the runway on the third go around at 23:07 local time. , as stated in today’s announcement by Korean Air.

“Passengers were transferred to three local hotels, while an alternative flight was planned” as the same airline announced for flight KE361. “We are currently investigating the causes of the incident,” he added.

Photos from the scene, which have not been confirmed and posted on social media, show the aircraft has suffered serious damagewith the nose landing gear appearing to have failed and collapsed.

Due to weather and plane malfunctions Korean Air #KE631 (likely due to an earlier landing attempt) we were informed to prepare for emergency landing procedures in Cebu at around 11:10-11:25pm local time 10/23/22. We braced ourselves and the pilot landed as best as possible pic.twitter.com/txDqLV6CcT

Korean Air President Ki Hong-woo wrote a letter apologizing for the incident on the flight in question, according to the company’s website, noting that an in-depth investigation will be conducted by local civil aviation authorities as well as the relevant Korean authorities.

“We remain committed to our promise to conduct flights safely and will do our best to implement measures to prevent such an incident from happening again,” Wu said.

A Korean Air plane slid off the runway while landing at Cebu international airport in the Philippines on Sunday, shutting down the country’s second busiest airport

All 173 passengers and crew were evacuated safely, with minor injuries reported pic.twitter.com/xzwnNzKeb3

The aircraft involved in the incident was handed over to Korean Air in 1998, according to online flight tracking website FlightRadar24, which reported that other flights to Cebu were diverted to other airports or returned to the airports they took off from.

The Mactan-Cebu International Airport Authority announced that the runway was temporarily closed in order to conduct a related inspection for its safe use parameters.

Korean Air has had a fatal plane crash since 1997, according to the Aviation Safety Network, an online site that compiles data on aviation incidents and accidents.

At the time, the company had a low level of flight safety, but sought outside help from Boeing Co and Delta Air Lines Inc, to improve its flight safety rules.

Facebook
Twitter
Pinterest
WhatsApp
Previous article
The Chancellor of Germany and the President of the European Commission want a “Marshall Plan” for the reconstruction of the country
Next article
Kanye West Jealous of Johnny Depp, Hires His Ex-Lawyer Camille Vasquez