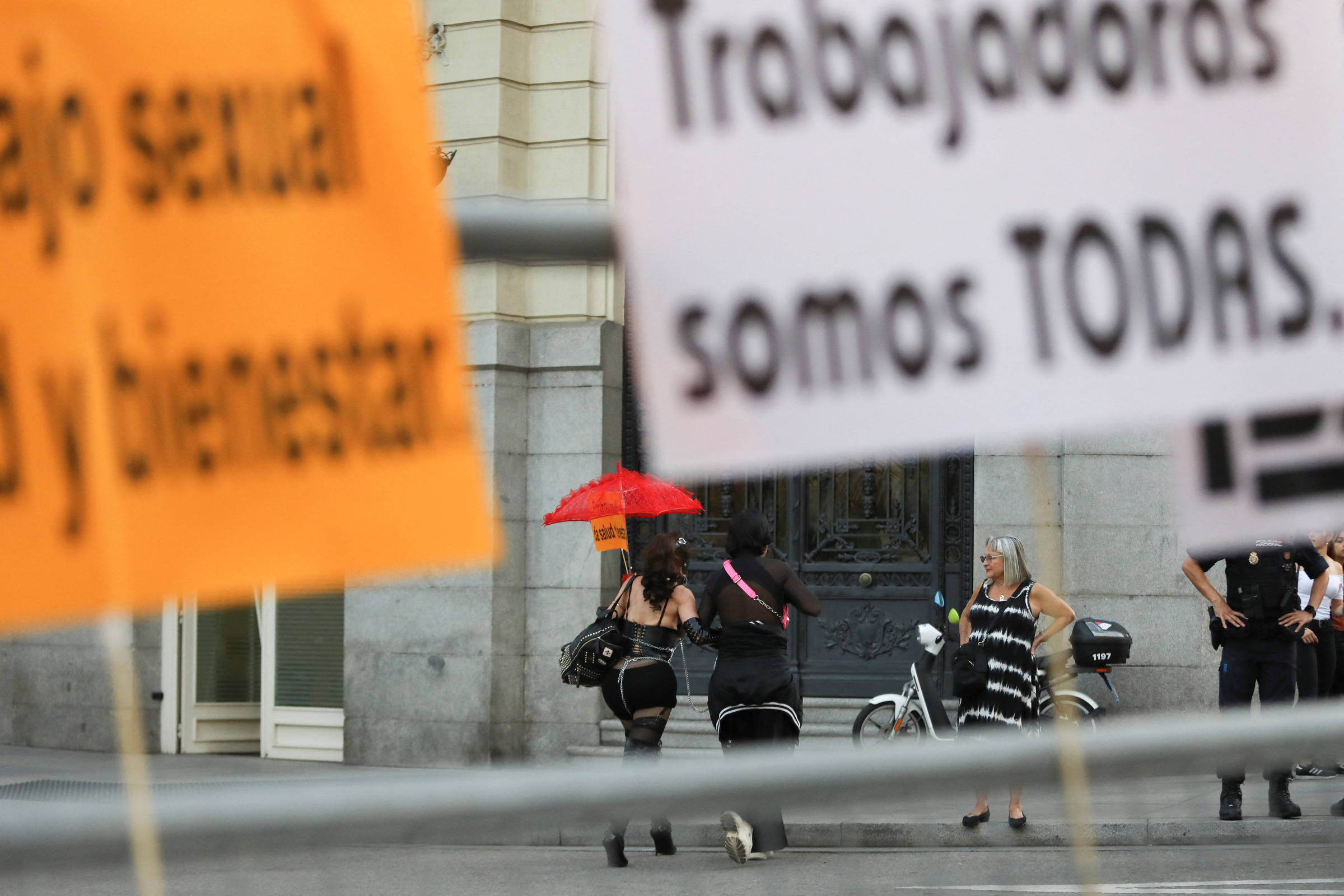 This is not how she envisioned starting a new life in Spain, but for Peruvian migrant Angela, 32, and her family in her home country, sex work has become a financial lifeline, helping to pay for her father’s cancer treatment and college his brother’s medicine.

“You have projects, you have ideas for life, but life surprises you,” she says. Like many sex workers in Spain, she is furious and worried about the ruling party’s plans to clamp down on the sex industry with a bill that purports to defend women’s rights.

The bill being drafted by the Socialist Party (PSOE) will criminalize the act of paying for sex and introduce tougher penalties for those who exploit the activity. The objective is, specifically, to end prostitution and sex trafficking by attacking demand.

Online sex work, such as through video calls, and the production of pornographic photos and videos will also be within the purview of the proposed legislation. There is already another law in place that prohibits advertisements of prostitution.

The proposals would be voted on in Parliament earlier this month, but some lawmakers agreed to have a dialogue with sex workers first, which could lead to amendments to the original text.

The proposed legislation, part of a larger campaign by socialists to promote women’s rights, treats sex workers as victims, not criminals, as would be the case if prostitution were outlawed.

The changes will not penalize sex workers in any way, says Socialist MP Andrea Fernandez, co-author of the bill. For her, all sex work is the result of exploitation that must be punished by law.

Until now, sex work has existed in a legal gray area in Spain and is largely tolerated, although sexual exploitation and pimping – the act of controlling sex workers or exploiting their work – are illegal.

But sex workers fear that the proposed crackdown will fail to end prostitution and will instead increase the danger faced by people who practice it.

“It will continue, only in worse conditions,” Angela, who asked not to give her full name, told Reuters. The proposed legislation sparked protests from sex workers.

At recent public rallies, some held up signs saying “sex work is work” and “feminist bitches.” In an effort to prevent passage of the new rules, Astra, an association of sex workers, has threatened to identify and publicly expose politicians who are clients of prostitutes.

Rakel, 41, a sex worker who is part of the StopAbolition campaign group, created to fight the proposed legislation, said that if the bill passes it will force prostitutes to work underground, raising the risk of HIV and violence due to to the lack of security.

“The government that passes this law will throw us into the arms of the mafia,” she says, asking not to give her full name.

Rakel says, for example, that only criminal networks will be willing to rent apartments to sex workers, because under the bill’s broader definition of exploiting the work of prostitutes, landlords will fear prosecution.

Spain’s socialist-majority government decided to go ahead with the legislation despite deep divisions in the party and its coalition partner, Podemos, over the text of the measure. Critics say the initiative is paternalistic and clouded by moral judgments about sex work.

The bill has split the women’s rights movement in Spain, pitting women against women in a bitter argument that far-left lawmaker Mireia Vehi says is spiraling out of control.

“It’s almost a discussion of who can and cannot qualify as a feminist,” says Vehi, who rejects the government’s approach.

“It’s a model that only leads to the persecution of women, that doesn’t end prostitution or trafficking,” he says, asking that alternatives such as the decriminalization of prostitution or even a universal basic income be discussed.

That would make it one of the biggest markets for prostitution in Europe – a statistic that has been used by socialist politicians to bolster the argument that deregulation implemented in the mid-1990s had no effect.

Groups working with women trafficked and forced into prostitution, in turn, have supported the government’s plans.

But many sex workers reject the argument that most women working as prostitutes were coerced, saying the vast majority freely chose to do so.

“I was exploited more when I was a waitress,” says Angela, noting that she rarely heard of women being forced into sex work.

The discussion in Spain comes at a time when the European Union is revising its 2011 directive against sex trafficking. The review could criminalize the act of paying for sex across the block.

At the moment, European countries take different approaches to the sex industry.

France and Sweden punish customers. In Croatia and Romania, sex workers can be arrested and prosecuted. In Greece and the Netherlands, sex work is legal, and sex workers must be licensed and obey rules about where and how they work.

Earlier this year, Belgium decriminalized sex work, adopting regulation through labor legislation that advocates say will let sex workers define how they work and could reduce violence and exploitation.

For now, efforts by prostitutes in Spain are focused on securing amendments to the socialist bill, including reversing the criminalization of paying for sex and narrowing the definition of pimping so that landlords are not punishable.

“The amendments may give us a little hope, but I don’t think it will be much,” said Susana Pastor, leader of the Astras union.

Facebook
Twitter
Pinterest
WhatsApp
Previous article
Italy: Financial police investigation against Pfizer for tax evasion
Next article
Guedes says possible corruption with amendments negotiated by the government is less than with the PT