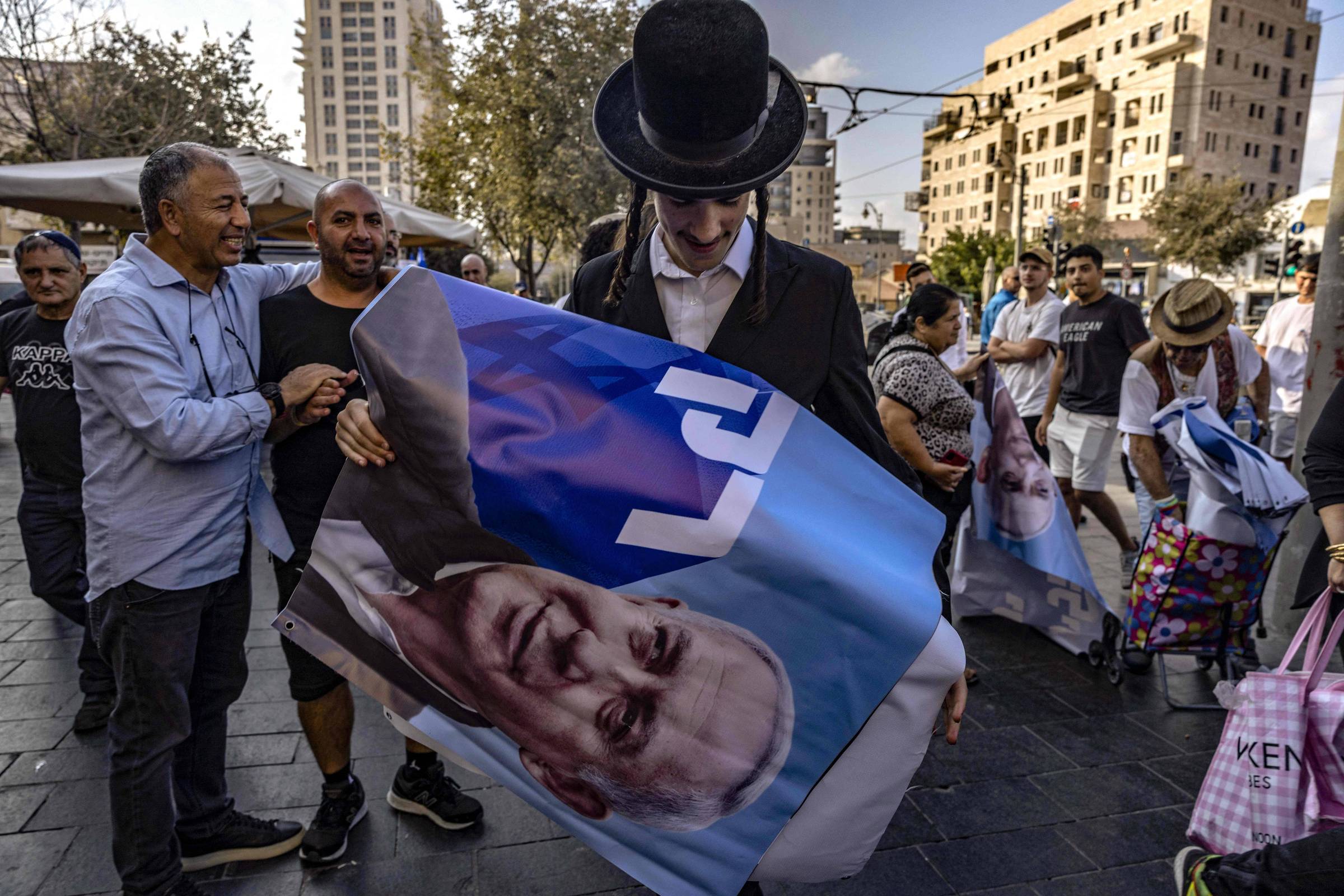 Israel’s popular comedy show “Wonderful Land” (Eretz Nehederet) opened its annual season in September with a scene mimicking the movie “Spell of Time.” But instead of a weatherman reliving Groundhog Day, the Israeli version shows an ordinary citizen waking up on the same date every time: the election for the prime minister.

The joke is almost obvious. After all, this Tuesday (1st), Israeli voters go to the polls for the fifth time since March 2019, an average of one election every eight and a half months.

The feeling of a time trap, however, doesn’t stop there. This is because all polls of voting intentions point, once again, to the continuation of the electoral impasse that has made it difficult to assemble a stable government coalition in the country.

Voters are divided almost evenly between two blocs: those who support and those who want to prevent the return to power of former prime minister Binyamin Netanyahu — also known as Bibi —, leader of the right-wing Likud (Union) party.

On the anti-Bibi side are two figures who have emerged in recent years in Israel. The first is current Prime Minister Yair Lapid, 58, a handsome former TV anchor who entered politics 10 years ago as a bastion of the secular Israeli middle class. His party, the centrist Yesh Atid (There’s a Future), has been gaining popularity. If before he received between 11 and 19 seats out of 120 in Parliament, he should, this time, get between 24 and 27, according to polls.

But Lapid has the image of being inexperienced against him. He has been premier for a very short time, since the end of June, when Tuesday’s election was called. Previously, the leader of the government was Naftali Bennett of the far-right Yemina (Right) party.

Bennett and Lapid led, together, a coalition formed by eight heterogeneous parties that only had in common the dislike of Bibi and managed to remove him from power. The plan was for Bennett to be prime minister for the first two years of his term and Lapid for the next two years.

But the government fell after losing a majority and bowing to the weight of internal divisions – after all, it was made up of three right-wing parties, two of the center and two of the left, with the support of an Arab minority party. Lapid, who was a kind of “deputy premier”, even at the head of the largest coalition party, was then elevated to the post until the formation of a new government after new elections. Bennett abandoned politics.

The short time in power is what weighs the most against Lapid. “To build his image, he needs, more than anything, time to transform him from a ‘casual tourist’ into a leader. It’s not clear that he had that time,” political analyst Nahum Barnea told the Yedioth Aharonoth newspaper. .

In the last four months, however, Lapid has had a busy schedule: he addressed the UN General Assembly, received the American Joe Biden, dealt with yet another round of tension with the Palestinians and managed to sign a historic agreement with Lebanon for the exploitation of gas in the Mediterranean Sea.

The second character is Defense Minister and former head of the Armed Forces Benny Gantz, of the Blue and White party, but who runs in these elections as part of the Machané Mamlachtit (National Camp) coalition. His political ideas are almost a mystery, and he tries to become the wild card of this vote: someone who could negotiate with both the pro-Bibi and the anti-Bibi bloc.

But, in the end, it is Netanyahu who will, again, be the key figure in this election. At age 73, he has held the prime minister’s seat for 15 years — 12 consecutive years from 2009 to 2021, an all-time record in Israeli history. Trying to show charisma, he is undeniably the most popular, efficient and malicious politician the country has ever had.

But alongside the buildup of power that saw him dubbed “King Bibi” on a cover of Time magazine in 2012, Netanyahu has collected numerous political and personal enemies. Many of his former allies swear they will never again be part of a government he leads. The reason: the former premier is known for not honoring agreements and outwitting any potential competitor.

One of his closest allies, far-right lawmaker Bezalel Smotrich, was recently recorded as saying that Netanyahu is a “liar, son of a liar”. Other than that, it cannot be forgotten that Bibi was indicted in three corruption cases that are still in progress.

Despite everything, he demonstrates an almost insatiable yearning for a triumphant return and, for that, he has appealed to far-right figures previously considered to be on the fringes of political debate. His party will certainly be the most voted and should win about 30 seats.

But to get the magic number of 61 seats – the minimum to form a government – ​​he sponsored the Otzma Yehudit (Jewish Force) coalition, formed by Smotrich and Itamar Ben-Gvir, two lawmakers who defend the expulsion of Arab citizens who do not swear. loyalty to Israel and are contrary to the rights of the LGBTQIA+ community.

Ben-Gvir is idolized by Baruch Goldstein, who killed 29 Muslims in 1994 in Hebron, West Bank. He is a lawyer who specializes in defending settlers and radical activists accused of hate crimes or terrorism.

All opinion polls, however, point to Netanyahu not getting a majority, as well as Lapid or Gantz, who are dealing with the weakening of the left and Arab minority parties. For many analysts, the knot of local politics will only be untied the day Netanyahu finally decides to retire. Then maybe new alliances will emerge. Until then, Israel must continue its particular Groundhog Day, with a 6th parliamentary election perhaps on the horizon.