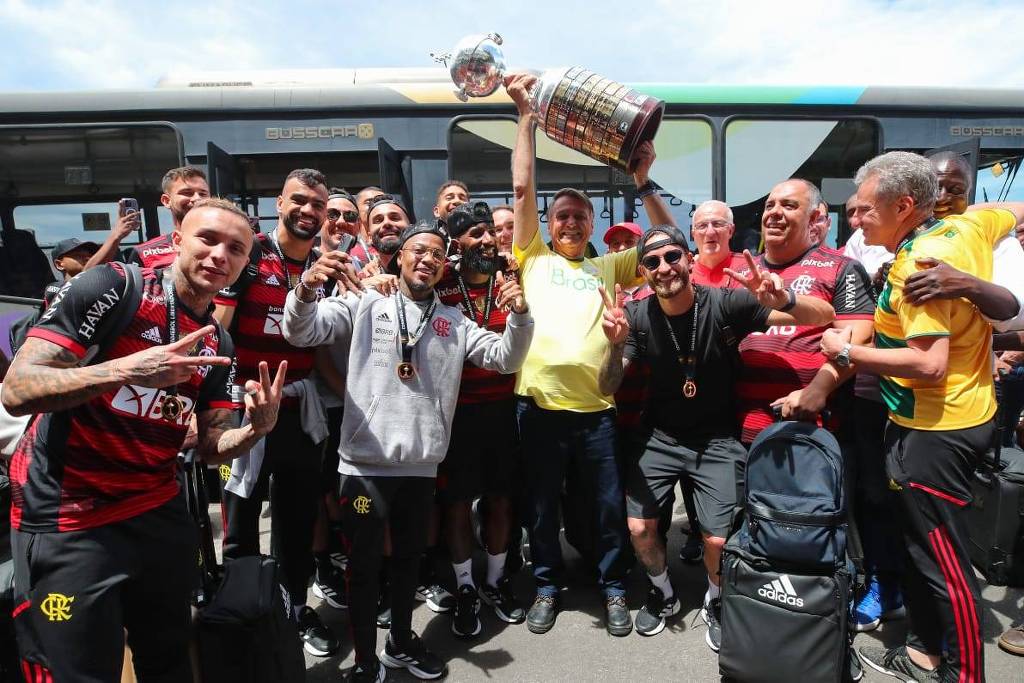 There is a saying that football and politics cannot be discussed. As well as being a questionable maxim, they often get mixed up.

This was the case in the use of football by fascist Italy in the 1934 and 1938 World Cups, by the Argentine military dictatorship in the 1978 World Cup and by the Brazilian military government in the 1970 World Cup, at the moment of greatest violence of the authoritarian regime.

Flamengo, three-time champion of the Libertadores da América Cup, is no exception. The team with the biggest fans on the continent and probably in the world, is the team of the heart of 21.8% of Brazilians, according to a July 2022 Ipec survey.

This popularity is exploited by politicians. The current president of Flamengo. Rodolfo Landim, supports Jair Bolsonaro and used the club numerous times to help his ally in his re-election attempt to the Presidency of the Republic.

However, the day after Flamengo won over Athletico Paranaense in the Libertadores final, played in Ecuador, Lula defeated Bolsonaro.

The vote in the Northeast of Brazil was decisive, as Lula received 69.3% of the vote in the region. Landim’s wife, Angela Machado, who is the club’s director of social responsibility, reacted to Bolsonaro’s defeat by attacking Northeasterners on their social media:

“We win where it’s produced, we lose where vacations are spent. We’re going to work, because if the cattle dies, the tick goes hungry.”

Xenophobic attacks on Northeasterners are recurrent among Bolsonaro voters. In addition to the seriousness of the prejudice, it was directed to a region with a large number of fans: according to the aforementioned Ipec survey, the club is preferred by 25.2% of people in the Northeast.

Asked if Flamengo should apologize, Landim denied: “This was not an action by Flamengo. It was a person. She is a natural person and has the right to take a stand. and think as you like.”

On the eve of the presidential election, still at the Monumental Stadium in Guayaquil, Landim and other Flamengo directors celebrated the Libertadores title by posing for photos wearing the team’s shirt and making Bolsonaro’s candidacy number, 22, with their hands.

The team’s arrival at Rio de Janeiro’s international airport was attended by Bolsonaro while voting took place across the country.

In a clear attempt to take advantage of the moment electorally, Bolsonaro, who is not even a fan of the team, even lifted the trophy. He then took a helicopter ride with players Pedro, Santos, Thiago Maia, Everton Cebolinha, Marinho and Diego Alves.

“Since 2019, Flamengo has been used as an instrument of bolsonarismo and a springboard to obtain personal benefits by members of its board. Today, in a violent political demonstration, director Angela Landim, wife of the current president of the club, distilled xenophobia against Northeasterners. By disagreeing with the vote option of the overwhelming majority of voters in the Northeast, the leader attacked and disrespected our fans, revealing once again the prejudiced and unpopular face of the current management of Flamengo”.

In fact, the use of the club to benefit Bolsonaro took place throughout his term. Despite being a Palmeiras fan, Bolsonaro has been to several Flamengo games, in Rio de Janeiro or Brasília.

When he was his Minister of Justice, former judge Sérgio Moro, a supporter of Athletico Paranaense, was invited to, wearing the Flamengo shirt, watch a game in Brasília. The vice president, General Hamilton Mourão, was honored by the club with an honorary title.

During the still acute moment of the Covid pandemic, the board of Flamengo and Bolsonaro, who always minimized the severity of the disease, converged in defending the immediate opening of the stadiums, contrary to the distancing measures.

Landim used his relationship with Bolsonaro to change the legislation on broadcasting matches on television.

This proximity between the two was also presented by both as an opportunity for the President of the Republic to intercede for the public bank Caixa Econômica Federal, manager of a plot of land in downtown Rio de Janeiro, to negotiate with Flamengo for the construction of a new club football stadium.

In 2021, Landim was considered by Bolsonaro to be his candidate for vice president. General Braga Netto, however, was chosen.

In March 2022, Bolsonaro nominated Landim for the position of director general of the Petrobras Board of Directors, but he declined the invitation a few days later.

Even before his inauguration, Lula’s visibility inside and outside Brazil after being elected president already surpasses that of the current president.

Just when the image of the most popular club in Brazil could be valued from the repercussion of the victory in Libertadores, Landim and the Flamengo board link it to the candidate who was not only rejected by the majority of the electorate but also flirts with the non-acceptance of his defeat.

In addition to disrespecting the majority of the club’s supporters, it is a stain on their reputation in one of the most glorious moments in their history.

Facebook
Twitter
Pinterest
WhatsApp
Previous article
Opinion: US election shows that right- and left-wing performative populism has lost ground
Next article
The pioneers of Moschofilero: A book about wine – a trademark of Mantineia