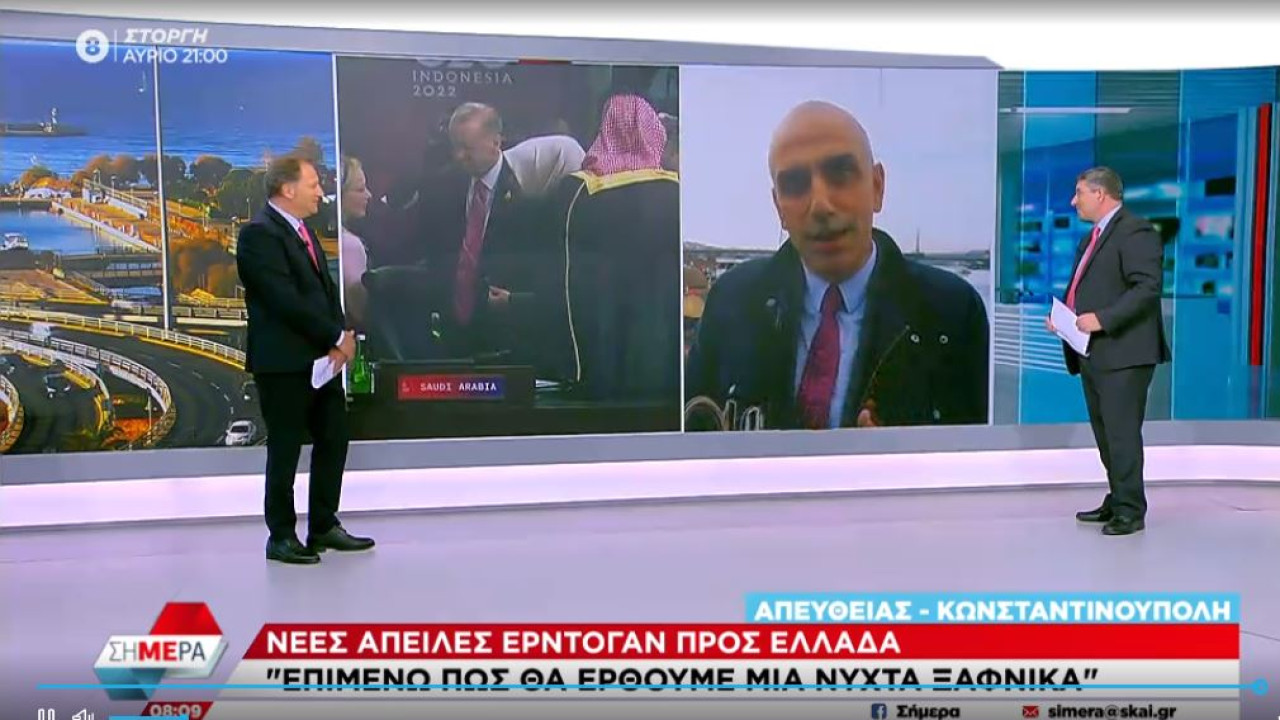 New threats Erdogan: “I insist that we will come one night suddenly” he said from the G20 podium

The Turkish media, as reported by Manolis Kostidis, point out that “the Greeks are already receiving F-16 Viper and Rafale” and add that the Turkish F-16 program “if approved, will be completed in at least five years”.

Turkish President Recep Tayyip Erdogan is sticking to his threats against Greece by repeating the unprecedented phrase “I insist that we will come suddenly one night” before journalists from around the world from the floor of the G20 summit in Bali.

“We are not backing down, this is our basic principle,” he said yesterday, causing great reactions even from American media such as the Washington Post, which noted that Turkey and Greece are NATO allies.

“Being or becoming one’s ally is about agreeing on who your common enemies are and who are not. Otherwise, the concept of alliance does not exist. This admission is easier said than done, especially when an ally is lost on a trip of selfishness – as befits an Ottoman sultan. This is Turkish President Recep Tayyip Erdogan. He only cares about himself and makes situations unnecessarily problematic and complex. To look strong before the June elections, he creates problems for friends and foes, while he is completely indifferent to whether his antics undermine the cohesion of the West and the security of Europe in general,” wrote the Washington Post.

At the same time, the concern and annoyance in Turkey about the equipment power of Greece in conjunction with American block for the F-16s, as was also seen from Erdogan’s statements yesterday.

The Turkish media, as the SKAI correspondent reports from Istanbul, Manolis Kostidispoint out that “the Greeks are already receiving F-16 Viper and Rafale” and add that the Turkish F-16 program “if approved, will be completed in at least five years”.

His reporter Haberturk Mehmet Akif Ersoy asked the former head of the Intelligence Service of the Turkish General Staff, Ismail Khaki Beijing when Turkey will have completed the modernization of its fighters.

Beijing replied: “Look how it will take us at least 5 years.”

The journalist continued: “How much has Greece modernized and how much time does it have left?”

Beijing: “Greece is already running the modernization program. It receives the F-16 Viper as well as the Rafale. In addition to these, they will modernize another 50 fighters. They come in different ways. They receive two fighters each. Maybe the whole program takes 4 or 5 years. But some of the Rafales have already arrived. One squadron, 18 Rafales are arriving and they are used, the rest will be new builds.”

The president of the Good Party launched a fierce attack against Erdogan, Meral Aksener, saying: “Gather! You don’t rule a circus, you rule a state!”.

The opposition talks about chaos within the government

Aksener said: “We have a minister who refuses to accept condolences and holds the US responsible for the terrorist attack,” referring to Turkish Interior Minister Suleyman Soylu’s statement, “We do not accept the condolences of the US embassy. We refuse!”.

And Aksener continued: “And while all this is happening, we have the president, Mr. Erdogan, who in Bali met with his friend Biden, talked and accepted the condolences. We expect and it is our right that these two coordinate and have a common position. I am addressing Mr. Erdogan and his associates. Let them get their minds together. You don’t rule a circus, you rule a state, a state!”