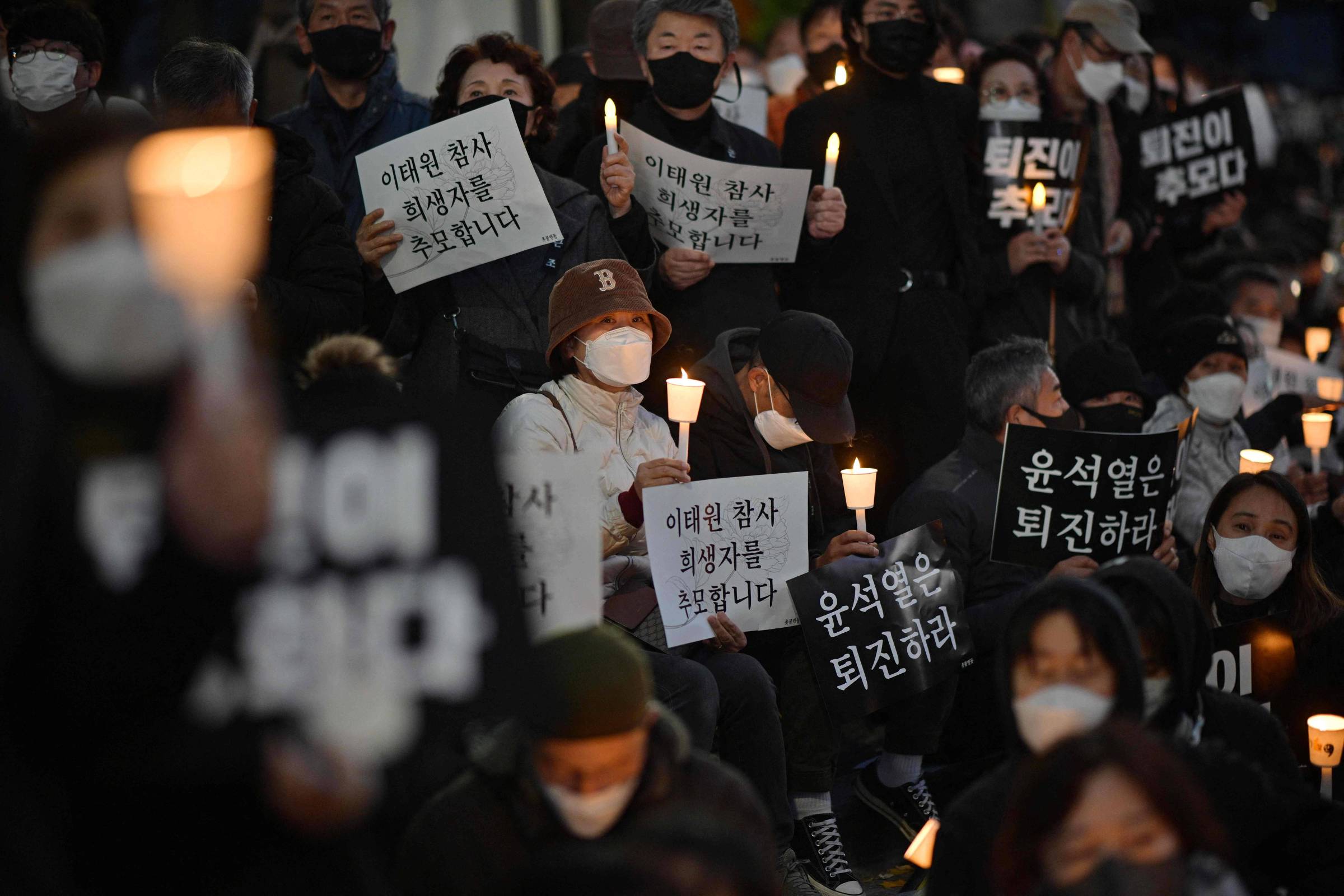 South Korean officials have known for years that the weekend of Halloween in Itaewon, Seoul’s popular district, used to attract large crowds. Internal warnings circulated about the possibility of people being crushed to death.

For days there were meetings and reports about the expectation of “disorderly” mobs forming. A local police chief asked his superiors to send in special troops to control crowds.

For hours, desperate calls were received about revelers trapped in a narrow alley, with pleas for the authorities to intervene, as there were people down and injured in the area.

Each time authorities ignored the warnings or let them pass without doing anything. They would have been crucial opportunities to prevent an overcrowding in Itaewon last October 29 in which 158 people would die and 196 others would be injured.

A New York Times analysis, based on eyewitness accounts, investigators’ findings, lawmakers’ testimony and official documents, sheds disturbing new detail on the South Korean government’s lax approach to security and the failures of its emergency response.

As of 8 pm local time, nearly an hour and a half after the first distress call, there were less than a dozen police officers in the area. Emergency services dispatched officers to street fights and other minor incidents, while agents monitoring surveillance cameras did not notice anything unusual.

Lack of coordination or insufficient coordination delayed relief efforts and crisis management. Many supervisors and managers did not become aware of the situation until 11 pm or later.

Now lawmakers and officials are looking into what went wrong, especially to find out why the first signs were missed and why it took so long to send help.

“It was a disaster created by administrative incompetence,” said independent deputy Min Hyungbae. “It’s like our country is going backwards.”

The police, fire department and various agencies involved in the emergency response declined to comment. The presidential office said it had commissioned a full investigation and would take action based on its findings.

Despite its technological, economic and cultural achievements, South Korea has suffered a series of man-made disasters, including a convenience store collapse, a ferry boat capsizing and catastrophic fires.

Until moving to a new official residence, the president, Yoon Suk-yeol, lived in a building built on the site of the department store collapse. In April, on the eighth anniversary of the ferry disaster, he said “the most sincere way to honor the victims’ memory is to make South Korea a safe place.”

When thousands of people gathered in a public demonstration this month to mourn the Itaewon tragedy, protesters criticized him for failing to keep his promise. “The best way to honor the memory of the victims is for you to resign!” they shouted.

The Halloween party this year, the first since the end of restrictions imposed due to the pandemic, promised to be big. Officials discussed ways to ensure safety at night and control crowds, sharing fears about people spilling into car lanes, men brandishing “toy guns” and “girls in bikinis” being too exposed.

This is what official documents from the police, fire department and Yongsan district administration, responsible for Itaewon, reveal. In a statement, police reported an increase in the number of people searching the internet for “Halloween” and “Itaewon”.

The holiday’s popularity and potential for safety mishaps had long worried officials. In 2020, when the crowd that celebrated Halloween was smaller, the police already warned in an internal document, to which opposition parliamentarians had access, about the possibility of “deaths in a push and pull”.

The labyrinth of bars and restaurants has been tightened by unauthorized construction, such as a metal wall at the Hamilton Hotel, further shrinking the surrounding alleys, including the alley where the fatal pushing took place, according to police and city officials. Seoul. Yongsan local authorities imposed fines but did nothing to remove the illegal structures. The hotel declined to comment, citing pending investigations.

South Korea has battalions of police who undergo specialized crowd control training. On the day of the tragedy, 4,700 specialized agents were positioned along the avenue between the center of Seoul and the presidential office, less than 1.6 km from Itaewon, to monitor tens of thousands of demonstrators dissatisfied with the president’s leadership. None of these agents were sent to Itaewon, where there were an estimated 130,000 people.

Days before the tragedy, the Yongsan Police Station asked the Seoul Metropolitan Police several times to send trained police officers to Itaewon on Halloween, as the local police chief, Lee Im-jae, told Parliament. He would have heard that specialized agents could not be diverted from public political acts.

On October 25, the head of Itaewon Police Station, smaller than Yongsan and under Yongsan’s supervision, told his superiors that he desperately needed more officers to control traffic on Halloween. This is what testimonies in Parliament by the Seoul police chief and opposition deputies revealed.

But the next day, when city and police leaders met with Itaewon shop owners to discuss Halloween, they made no plans to control the crowd, said the superintendent general of the National Police Agency.

On October 29, 137 police officers were sent to Itaewon, of which 52 were detectives specializing in drug crimes.

Seoul Metropolitan Police Chief Kim Kwang-ho told parliament, when asked whether the government’s war on drugs had distracted officers from ensuring crowd safety, that “we were heavily focused on drugs “.

But the president’s office said the tragedy was unrelated to his new anti-drug campaign launched in previous weeks. Instead, he criticized the police and other agencies for failing to anticipate the possibility of accidents in the crowd.

The police had planned to deploy most of the 137 officers by 8:00 pm, based on the Halloween rush of previous years. As of 8 pm there were only 11 Itaewon police officers present, according to opposition deputy Lee Hyungseok.

The city’s new digital map was in operation to track densities in real time, in case authorities wanted to monitor the crowd. Separately, according to Kim Sung-ho, a senior official at the Ministry of the Interior, the Yongsan administration has not reported any unusual movements.

At 6:34 pm, the emergency number 112 began receiving desperate calls. According to recordings of the calls that were played for MPs, members of the public reported that the situation was “absolute chaos” and that the crowd was “out of control”.

“Looks like people are going to be crushed to death,” said the first one who called. Until 22:11, there were ten more calls made to the emergency service pointing to a dangerous crowd.

The first call was ignored, seen as nothing serious, a senior National Police Agency official told reporters. Nor were any measures taken after subsequent calls.

Senior officials also failed to detect that a crisis was brewing, according to their supervisor, Senior Superintendent Ryu Mi-jin, who was in her own workroom on an upper floor.

“I can only say that I am very sorry,” Ryu told a parliamentary hearing, adding that it is customary for the supervisor to stay in a separate location. She said she was only informed of the crisis at 11:39 pm, nearly an hour after first responders arrived on the scene.

Kim Baek-gyeom, a sergeant at the Itaewon police station, said he and his colleagues spent the early evening busy with routine tasks. Around 10 pm he and two colleagues were dispatched to check out a possible street fight near the alley. When they arrived at the scene, they saw the agglomeration of the crowd.

A call made to the 119 line at 10:15 pm finally caught the attention of the authorities. “You need to send police, fire trucks, everything you’ve got. People are being crushed to death here,” said the caller. “I’m seeing wounded people scattered across the street.”

At 10:42 pm, more than four hours after the initial call about the increased crowd, firefighters reported their first official contact with casualties and urgently called for backup. “We’re doing CPR (cardiopulmonary resuscitation) on 15 people,” said one.

It was only at 10:48 pm that the narcotics section detectives – who did not arrest a single drug user that night – were redirected to rescue work. Crowd control agents were not dispatched to Itaewon until 11:40 pm, three hours after political rallies ended.

A lack of coordination complicated the efforts. A telephone operator for the National Center for Medical Emergencies complained to colleagues at the fire department and Seoul City Hall that the police were blocking some first responders from accessing the scene. At one point, a telephone operator allegedly threatened to “stop sending our teams”.

“Now stop transporting the dead”, the operator instructed his colleagues on 119. “First we have to take the 40 people who are still alive, including those in critical condition.”

Pointing blame at the upper echelons

South Koreans expressed gratitude to the rescuers. They filled the Yongsan fire department website with thank-you notes and sent tangerines and fried chicken to the Itaewon police station.

They have increasingly directed their anger at senior leaders. At a mourning site near City Hall, a woman who said she lost her son in the tragedy destroyed a wreath sent by President Yoon. A citizen hung a 15-meter banner calling for the resignation of the “embarrassing” president.

The absence of senior leaders can be problematic in a bureaucracy. “South Korean civil servants rarely act unless their bosses tell them what to do,” explains Yoon Yong-Kyun, professor of public security at Semyung University.

The President became aware of the disaster at 11:01 pm, and his Minister of the Interior, responsible for all police and firefighters, at 11:20 pm. It was almost midnight when City Hall sent alert messages to cell phones asking citizens to avoid going to Itaewon.

Kim, the Seoul police chief, did not find out what had happened until Lee, the Yongsan police chief, called him at 11:36 pm. After dealing with the political protests until earlier that night, Lee had planned to catch up on the Halloween festivities later.

He finished his dinner and drove to Itaewon, 2.4 km away, listening to police radio communications on the way. Traffic was heavy, and after spending an hour in the car, he decided to walk. According to surveillance camera footage, he walked at a leisurely pace, with his hands behind his back.

He would later say, at a parliamentary hearing, that he only became aware of the ongoing crisis when he arrived in Itaewon at 11 pm. “I feel deeply unhappy,” he said. “For the rest of my life I will be guilty before the victims and their families.”