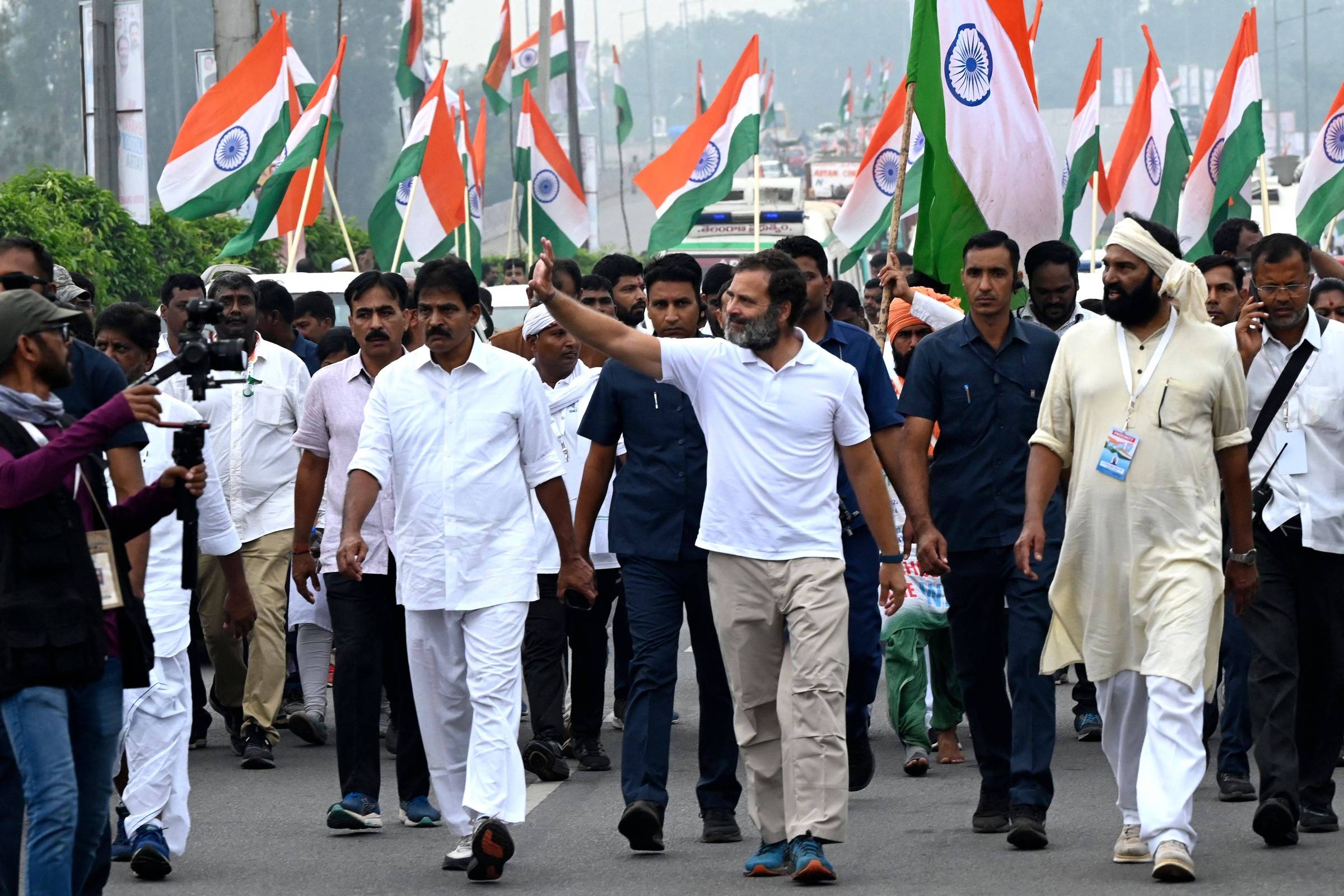 On the 76th day of his long northward march across the length of India, Rahul Gandhi, scion of a once mighty political dynasty, entered a textile town in the middle of this vast country, his face and hair covered with dust.

Gone are the luxury trappings that his opponents in India’s ruling Hindu nationalist party used to paint his caricature as authoritarian and aloof. Now, Gandhi was talking about blistered feet and the struggle of the common man. He was shaking hands with children, hugging older men and women who stroked his hair and kissed his forehead, on what he hopes will be a 2,000-mile journey for his once-dominant congressional party to pull out of the political wasteland.

“All democratic institutions have been closed to us by the government: parliament, media, elections,” Gandhi, 52, told supporters late last month in Burhanpur, in Madhya Pradesh state. “There was no other way but to go out into the streets to listen and connect with people.”

With a national election less than 16 months away, Gandhi’s march could determine whether India’s fractured political opposition can do anything to stop the era-defining ambitions of the ruling Bharatiya Janata Party (BJP), led by the prime minister. Narendra Modi.

India’s future as a multi-party democracy is at stake. Modi, one of the most powerful leaders in Indian history, has remade his secular political base to privilege the Hindu majority and sideline Muslims and other minorities.

His imprint is so deep and his successes so complete that his advisers say the BJP will remain in control of the country for decades to come.

The party has increased its grip across the country and its institutions, and opposition politicians complain that they have been pushed out of platforms where they can reach the masses in the cycle of democratic politics.

Parliament, once a thriving debating chamber, is now almost confined to ministerial speeches, with the ruling party shunning debates on important policy issues. The BJP, through a mixture of pressure and the threat to withhold government advertising money, has generally intimidated the mainstream media.

After Gandhi arrived in Burhanpur, where a large crowd greeted him, some watching from rooftops and others from the thin branches of trees, there was almost no mention of him on television programs.

That Gandhi found it necessary to walk across India, struggling to catch a ray of the spotlight and project a new profile, is the culmination of an unimaginable turnaround in the fortunes of his family and his party.

The Indian National Congress party led the country through two-thirds of its 75 years of independence, and the Gandhi-Nehru family produced three prime ministers who ruled for a total of nearly four decades.

But in Gandhi’s decade as official party chairman or de facto leader, he has faced repeated defeats in national and state elections, and currently holds just 53 of 543 seats in parliament. The BJP has 303 seats.

With the party increasingly defined not by ideas but by the family loyalty that has been central to its history, the dilemma surrounding its decline is often simplified as: it cannot be, with or without the Gandhi.

As the Congress party withers, its messy scandals and infighting are increasingly manifest in public. The confusion created by the family’s inability to reconcile the warring factions has resulted in stagnation at the local level, party officials say, and defections at the top.

“This march, of course, is his last attempt to revive his party’s fortunes and bolster his national image,” said Sumit Ganguly, professor of political science at Indiana University. “But beyond the fanfare, he failed to define a clear, alternative vision for the country.”

Gandhi said he began his journey – which will take about 150 days as he and his 120-strong entourage cover about 20 kilometers a day, sleeping in containers towed on heavy trucks – to help unite a country he said was deeply polarized by the Modi’s Hindu majority politics.

Gandhi’s simple message of unity, congressional leaders said, represents the party’s first major ideological attack on the Hindu idea that India is being consolidated by the BJP.

“It’s our last move,” said Jairam Ramesh, a former federal minister who has walked with Gandhi. “We’re putting everything we’ve got into this. If we don’t make a difference through this, there’s going to be a problem for us both as a party and as an ideology.”

Modi’s imprint on Indian politics is so indelible that Gandhi, who declined to be interviewed for this article, appeared to imitate him during his journey across the country, even as he cast himself as an alternative.

Gandhi’s forehead is often adorned with a red dot, or tilak, a mark of Hindu devotion. He has traded his old clean-shaven look for a beard that grows every day, and he often participates in temple visits and religious ceremonies when he stops in towns and cities.

These long marches are part of a well-established political tradition in India, dating back to the country’s struggle for independence. In the 1990s, when the roles were reversed, the BJP embarked on a similar march, rallying around the construction of a Hindu temple on the site of a Mughal-era mosque. This march helped to ignite the BJP’s ideological foundation and set the stage for its later rise.

It is far from clear whether Gandhi can bring his party back from a path of irrelevance in national politics. But he appears to be banking on a dual strategy — at once placing himself at the center of the effort to build a narrative and direction while creating some distance by handing over the party presidency to someone outside the family.

After long periods of resentment within the ranks of Congress over the Gandhi family’s refusal to share leadership, the party in October elected an 80-year-old Loyalist as its first non-Gandhi president in 24 years.

To some critics, the choice of the new leader, as well as the march’s singular focus on Gandhi, made it clear that the family was not giving up in meaningful ways that might fix the party’s dysfunction and eroding support.