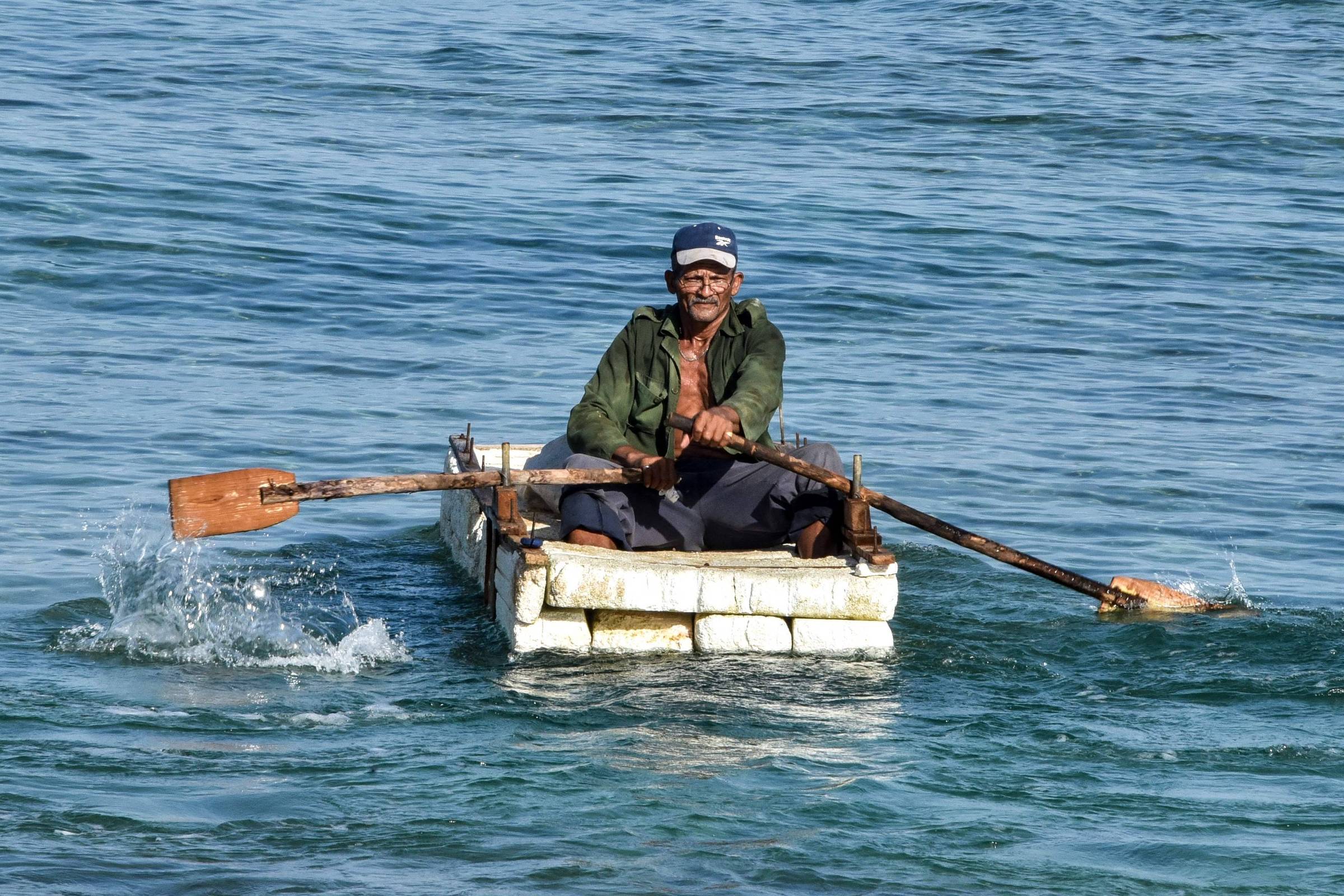 Cuba is experiencing the biggest wave of exodus in 50 years, with 2% of its population going to the US

Cuban Roger García Ordaz makes no secret of his many attempts to flee the country.

He has already tried to leave the island 11 times, in boats made of wood, polystyrene and resin. He has a tattoo to mark every failed attempt, including the three where his boat was damaged and the eight where the US Coast Guard stopped him at sea and sent him home.

Hundreds of fragile homemade boats have left this year from Baracoa, the fishing village west of Havana where García, 34, lives — so many that the village has earned the nickname “Terminal Three.”

“Of course I will continue to throw myself into the sea until I get there,” García said. “Or, if the sea wants to end my life, so be it.”

It is not new that living conditions in Cuba under communist rule are precarious. But now, mounting poverty and hopelessness have triggered the biggest exodus from the Caribbean island since the rise of Fidel Castro more than half a century ago.

The country has been hit doubly hard by tightening US sanctions and the Covid pandemic, which has eviscerated one of its main sources of income: tourism. Food became even scarcer and more expensive. In front of pharmacies, where medicines are scarce, queues begin to form before dawn. And millions of people face hour-long blackouts daily.

Last year, nearly 250,000 Cubans — more than 2% of the island’s 11 million people — migrated to the United States. According to US government data, most of them reached the southern border by land.

Even for a country known for mass exodus, the current wave of migration is staggering. The number of Cubans leaving the country today is greater than the sum of the country’s two biggest migratory events —the Mariel exodus, in 1980, and the ferryman crisis, the name given to those who ventured in improvised boats towards the March, 1994.

But if those two movements peaked within the span of a year, experts say the current wave of migration, compared to a wartime exodus, has no end in sight and threatens the stability of a country that already has one of the world’s most vulnerable populations. hemisphere.

The avalanche of departing Cubans still creates a problem for the United States. Cuba is now one of the largest sources of immigrants to the US, second only to Mexico, and has become the main driver of the flood of immigrants at the US-Mexico border. The situation has represented a serious political obstacle for President Joe Biden and is seen as a serious national security problem by the US government.

According to a senior State Department official banned from speaking publicly on the matter, the numbers for Cuba are historic, and that’s a fact. However, around the world more people are migrating than ever before, and this trend is manifest in our hemisphere as well.

Many experts say that US policy towards the island helps fuel the migration crisis that the US administration is now struggling to address.

To woo Cuban-American voters in South Florida, the Trump administration revoked a policy of engagement with Cuba launched by President Barack Obama, which included restoring diplomatic ties between the two countries and increasing travel to the island. President Trump replaced it with a “maximum pressure” campaign that tightened sanctions and sharply limited the remittances Cubans could receive from family members in the United States, a crucial source of Cuban income.

“It’s not hard to understand: if you devastate a country 140 kilometers from your border with sanctions, people will come to your border in search of economic opportunities,” says Ben Rhodes, who was deputy national security adviser under the government. Obama is responsible for discussions with Cuba during his administration.

A significant lifting of sanctions is not on the agenda, but the two governments are committed to dealing with the extraordinary increase in migration.

Washington recently announced that it will restart consular services in Havana in January and issue at least 20,000 visas to Cubans in 2023, as provided for in long-standing agreements between the two countries. Officials hope this will deter some people from embarking on dangerous trips to the US.

Havana has agreed to resume flights from the US of deported Cubans – another step in trying to discourage immigration. And the Biden administration lifted the cap on remittances Cuban-Americans are allowed to send to relatives on the island and licensed a US company to process the transfers to Cuba.

Cuba’s freefall has been accelerated by the pandemic. In the last three years, national financial reserves have dwindled and the country has had difficulty keeping its stores supplied. Imports, mainly food and fuel, fell by half. The situation is so precarious that the public electricity company boasted this month that the power supply had continued uninterrupted for 13 hours and 13 minutes.

Last year, fed up with the economic decline and lack of freedom made worse by the Covid lockdown, tens of thousands of Cubans took to the streets in the biggest anti-government protests in decades. The protests were suppressed and nearly 700 people are still in detention, according to a Cuban human rights organization.

Cubans with less resources try to leave in makeshift boats, and at least 100 have died at sea since 2020, according to the US Coast Guard. In the last two months alone, the agency has intercepted nearly 3,000 Cubans at sea.

But today most Cuban migrants leave the island by plane, often with tickets paid for by family members abroad. Next, they face a difficult overland journey. (Although it is still illegal to leave Cuba by sea, the country eliminated the requirement for an exit visa by air a decade ago.)

The floodgates opened last year when Nicaragua stopped requiring entry visas for Cubans. Tens of thousands of Cubans sold their homes and possessions and flew to the Nicaraguan capital, Managua. From there, they paid “coyotes,” as people smugglers are known, to help them make the 2,700-kilometer overland journey to the American border.

Katrin Hansing is an anthropologist at the City University of New York and is on sabbatical in Cuba. She notes that the sky-high migration figures do not include the thousands of Cubans who have left for other countries, including Serbia and Russia.

“This is the biggest quantitative and qualitative drain of human capital this country has experienced since the revolution,” she said. “They are the best minds, the smartest people and the ones with the most energy.”

The departure of many young Cubans of working age points to a bleak demographic future for a country where average life expectancy, at 78 years, is higher than the rest of the region, experts say. The government is already struggling to pay the meager pensions on which older Cubans depend.

The hemorrhaging of Cubans from their country is nothing short of devastating, according to researcher Elaine Acosta González of Florida International University. “Cuba is being depopulated.”

A few years ago, Cuba’s future looked very different. With the Obama administration loosening restrictions on travel to the island, American tourists have pumped dollars into Cuba’s nascent private sector.

Now travel is again severely restricted, and years of economic decline have extinguished the last shreds of optimism among many Cubans.

Taxi driver Joan Cruz Méndez, 41, who has already tried to leave three times, looked out over the sea in Baracoa and explained why so many boats that were previously moored in front of the city have disappeared, along with their owners.

“The last thing you can lose is hope, and I think a large part of the population has lost hope,” Cruz said. He said that he once went as far as 50 kilometers into the sea, but was forced to turn back because many of the people on the boat got seasick and vomited.

In March, Cruz bought a plane ticket to Panama for his wife and spent his savings to pay a coyote $6,000 to fly her to the United States, where she sought political asylum. Now, she works at an auto parts store in Houston.

When the sea is calm, people wait for the local contingent of the Cuban coastguard to finish their shift, then carry their makeshift boats on their shoulders, cross the city and over craggy rocks, and then gently lower them into the water.

In May, Yoel Taureaux Duvergel, 32, and his wife Yanari, five months pregnant with their only child, set sail at dawn along with four other people. His boat’s engine broke down. They began to row out, but were intercepted by the US Coast Guard just a few miles off the US coast and taken back to Cuba, where Taureaux now tries to make ends meet by doing odd jobs.

Asked why he tried to leave, he laughed. “What do you mean – why did I want to leave? Don’t you live in Cuba?”