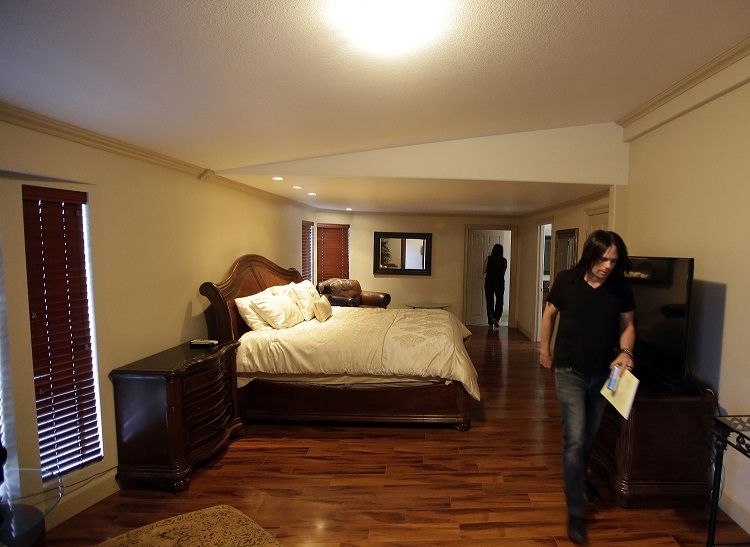 Love Ranch: Celebrity brothel goes under the hammer for $ 1.2 million

The infamous Love Ranch, a Nevada brothel where Khloe Kardashian’s former NBA star and ex-husband Lamar Odom overdosed in 2015, is selling for $ 1.2 million.

It is located just 80 miles outside of Las Vegas, a 15-room house that bears no resemblance to the scandalous stories about it. Perhaps the only thing that “testifies” to the true secrets of the brothel is the half-naked statue of a woman who wearing red underwear located in front of the red building of the property.

Before becoming a famous brothel for its “Viagra Parties”, Love Ranch was known by several different names – such as the Nevada Sun Rancho and the Las Vegas Sun Club – before becoming a nudist ranch for 18 years from 1989 to 2007.

During Hoff’s reign, the licensed brothel offered a range of services 24 hours a day, including 4-Play for Two, Oil Wrestling, Viagra and Vibrators, and the Girlfriend Experience.

The ranch, located in the desert town of Crystal, has pink rooms, sparsely decorated with posters and small furniture, as well as the VIP room where Lamar Odom overdosed in 2015 and was found (unconscious) by two prostitutes.

For $ 1.2 million, the new owner will get all 75 acres and “the Ranch with 15 suites, two new kitchens, a new bar, an excavator, a runway, an advertising truck and a limousine.” The sale includes another “recently renovated bar, two prefabricated houses and another 21 developed plots ready to be built at Crystal & Pahrump”.

Odom in the brothel allegedly drank brandy and took herbal Viagra, and possibly other drugs – although the star denies it. Lamar was found unconscious with foam running from his mouth by two prostitutes – who visited him six times a day for “private party sessions” – where he was found unconscious in the early afternoon.

According to Love Ranch sources, the two sex workers told police they saw Lamar go to the toilet alone last night and heard a snoring sound.

Odom was later found to have no cocaine and the cocaine found in his system had already been metabolized – making it difficult to determine when he used it – when he was hospitalized on October 13, 2015 in critical condition in Las Vegas and suffered 12 strokes and six heart attacks. He was later taken to a Los Angeles hospital.

A few months later, Odom accused Hof of trying to kill him and denied any drug use.

Hof later said the athlete was just trying to “escape all the pressure and have fun”.

Three years later, Hoff died on the ranch at the age of 72. He reportedly went to one of the brothel rooms with one of the girls the night before his death. He was also found naked and with a sex toy, a magic wand on the sheets.

Facebook
Twitter
Pinterest
WhatsApp
Previous article
#Hashtag: 10 things you need to know about Telegram
Next article
WHERE: The acute phase of the pandemic could end this year if 70% of the world’s population is vaccinated