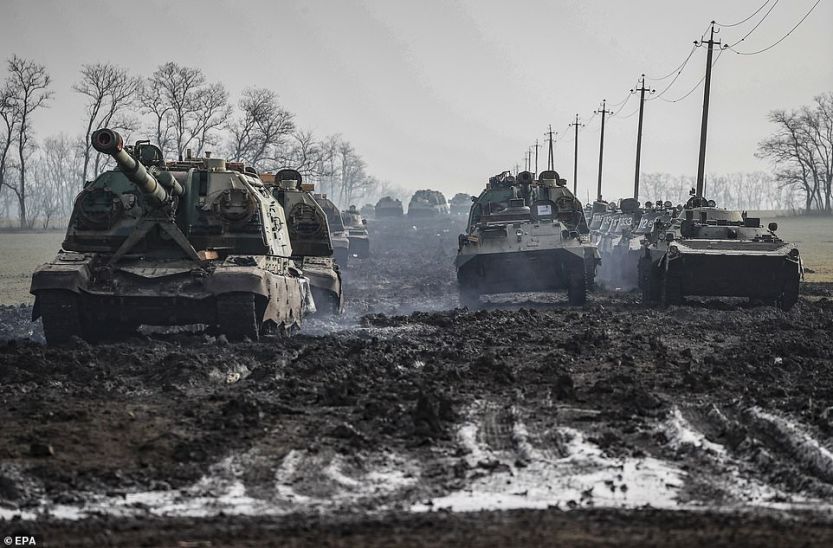 With “A barrage of sanctions” The West responded to Russian provocations in Donbas on Tuesday, but the Kremlin, led by Vladimir Putin, appears ready to pull the strings in eastern Ukraine, sparking a Russia-Ukraine conflict and boosting oil and natural gas prices. In fact, Western leaders have warned Putin that the announced sanctions are just the beginning and clearly stricter measures will follow, if he continues his uncompromising policy in Donbas.

In particular, the imposition of the first package of sanctions against Russia was announced in a speech by US President Joe Biden. Among other things, he announced sanctions on the “Russian elite”, in two Russian banks, while he pointed out that Moscow will not be able to draw money from the West to service its debt.

The White House has described Vladimir Putin’s move to deploy Russian forces in Ukraine’s two autonomous regions of Donetsk and Luhansk as an “invasion” of eastern Ukraine.

The EU Member States have agreed unanimously in a series of sanctions in Russia, French Foreign Minister Jean-Yves Le Drian and EU High Representative for Foreign Affairs and Security Policy Josep Borrell said in Paris, where the emergency meeting of the European Union’s foreign ministers is taking place. “The sanctions package will hurt Russia a lot,” he said.

The EU’s High Representative for Foreign Affairs and Security Policy has warned that Russia’s “serious breaches” will not go unanswered. He said EU sanctions would target Russia and its government and prevent the country to gain access in European capital and EU markets.

The Prime Minister of the United Kingdom Boris Johnson and the President of France Emanuel Macron “Creepy developments in Ukraine”, Downing Street spokesman announced on Tuesday announcing a new package of sanctions in Russia.

A first package of sanctions against five Russian banks and three Russian oligarchs was announced by the Prime Minister of the United Kingdom from the floor of the House of Commons. Their assets in Britain will be frozen, people under sanctions will be barred from entering the country and British citizens and British companies will be barred from doing business with them.

The five banks are: Rossiayaz Bank, IS Bank, General Bank, Promsvyazbank, Black Sea Bank. The three people against whom the sanctions are directed are Gennady Timchenko, Igor Rothenberg and Boris Rothenberg. These are billionaire businessmen with current strengths in the energy sector and ongoing relations with Vladimir Putin.

Vladimir Putin formally requested the formal permission of the upper house for the development of the army “abroad”, and received it unanimously, further escalating the tension with Ukraine after the Russian recognition of the independence of Donetsk and Luhansk. This could pave the way for a wider attack on Ukrainian territory are reported by Western media. “The decision enters into force immediately “ said one of the Russian lawmakers. Shortly afterwards, the Russian president stated that “The Minsk agreement no longer exists.”

Putin had called for a “peacekeeping mission” in the two breakaway regions of eastern Ukraine. One of Russia’s deputy defense ministers said that Russia “He had no choice.”

However, Russian lawmaker Konstantin Kosachev claimed that the proposed development in the Donbas region was designed solely to “avoid a major war, the kind that the United States and Ukraine seem to want.”

“It simply came to our notice then to be open to dialogue. We want to understand what this dialogue will be about. “If it is aimed at reducing Russia and making it responsible for everything, then there can be no such dialogue,” Lavrov said.

Facebook
Twitter
Pinterest
WhatsApp
Previous article
Less than 20,000 cases on Tuesday – The recession continues – What will happen to the masks
Next article
Gambling reporter predicts contribution of 17% and income tax of 20% for prizes of BRL 10,000 or more

Over 3,500 dead from the earthquakes in Turkey and Syria – They are looking for a “sign of life” in the ruins of the...