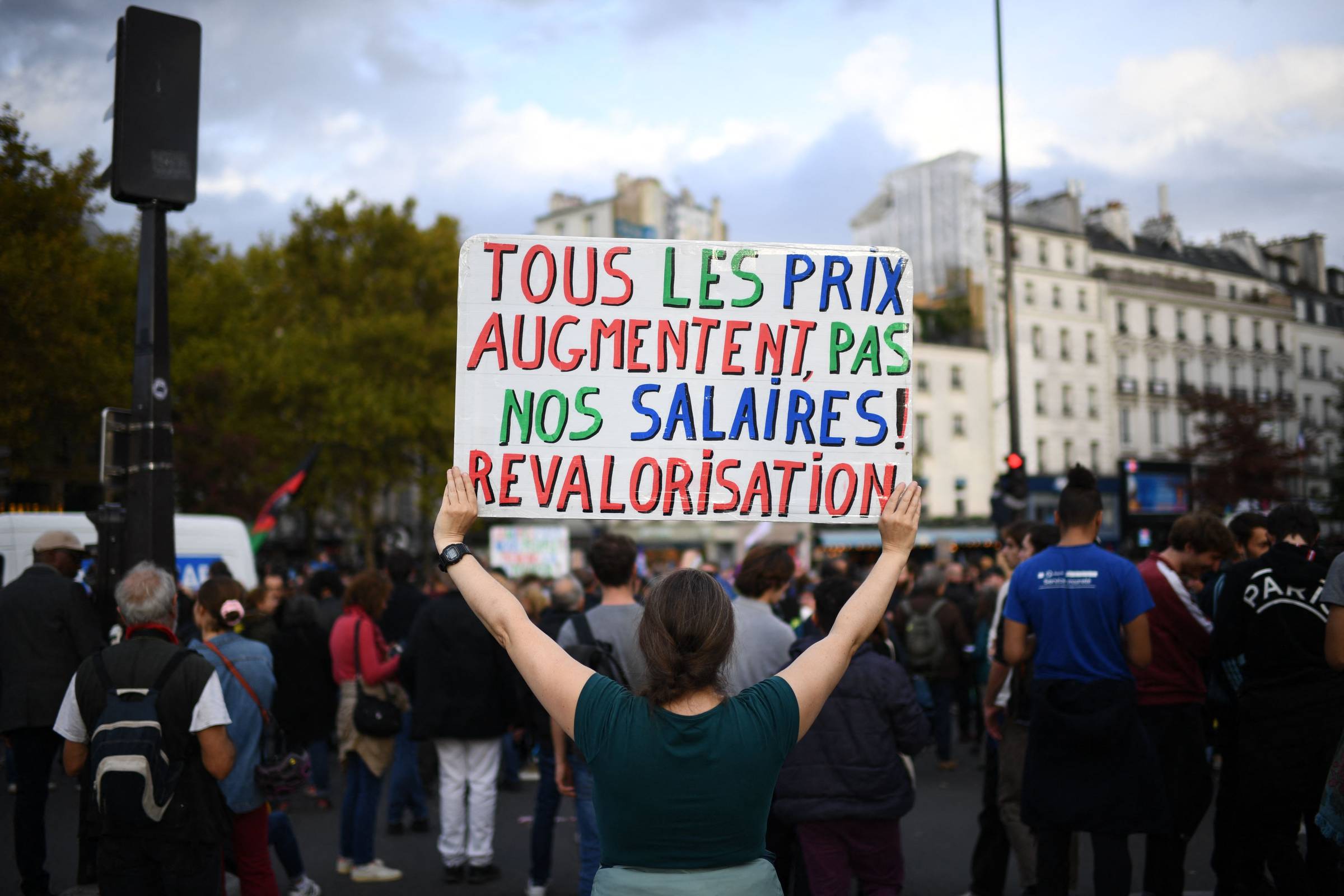 Some 140,000 people, according to organizers, took to the streets of Paris on Sunday to protest rising prices, after weeks of strikes for higher wages at oil refineries spurred calls for a general strike. The march was organized by the left-wing alliance of the French Parliament, Nupes.

“We’ve already got what we wanted. It’s just the beginning,” said Insubmissive France’s deputy Aurélie Trouvé, leader of the march.

The leader of the leftist party La France Insoumise, Jean-Luc Melenchon, marched alongside this year’s Nobel Prize winner for Literature, Annie Ernaux. He called a general strike for Tuesday (18).

“You’re going to live a week like no other, we’re the ones who started this march,” he told the crowd.

Melenchon followed in the footsteps of four unions — but not France’s biggest, the moderate CFDT — that called strikes and protests on Tuesday over pay increases.

The four unions also called the protests to help protect the right to strike after the government ordered the requisition of some oil refinery workers, a move seen by unions as a violation of their constitutional rights.

“Today’s march is a march of supporters who want to block the country,” he told French radio station Europe 1.

The protest comes two days after the French energy giant announced a salary increase agreement (7% plus bonuses) with the two biggest unions that represent the workforce of its four refineries in the country. The CGT union refused to accept it, demanding a 10% raise, and its members keep picketing.

“Obviously, there is a right to strike, but at some point the country has to be able to function,” Attal said in an interview with different French media outlets.

This week, the strike was suspended in the two refineries of the Esso-ExxonMobil group in France, thanks to a salary agreement signed on Tuesday (11) and under pressure from the Executive, decided to take control of the plants so that the activity can be resumed.

At least a third of the country’s gas stations face supply problems, especially around Paris and in the north, which mean waiting hours for refills. Many companies have reduced travel and deliveries, and even emergency service vehicles are being affected.

The huge profits made by the energy companies, due to record fuel prices, are arousing sympathy for demands for wage increases among workers. According to a BVA poll published on Friday, however, 37% of French people support the strikes.

For Christopher Savidan, 47, unemployed for five years and supporter of Insubmissive France, “it’s time to wake up.” “The people at the top are out of touch [com o povo]. We pay taxes, we don’t know why, everything is going down the drain. The logic is that all fights must cluster,” he said.

“The message is simple: we want a better sharing of wealth”, said Olivier Faure, leader of the Socialist Party (PS), during this “meeting”, addressing the protesters with the gesture of a V for victory.

Among the flags, the entire French left was represented, from the deputies of Insubmissive France, Manuel Bompard and Clémentine Autain, to the ecologists Sandrine Rousseau and Eric Piolle, including Philippe Poutou. Jean-Luc Mélenchon, with his red tie and his tricolor rooster on his lapel, arrived alongside Nobel Prize winner Annie Ernaux.

Many “yellow vests” but also many retirees were visible in a colorful march punctuated by songs, and even the Star Wars soundtrack.

“The elected deputies must put themselves at the service of people who are hungry”, pleads Jerome Rodrigues, an emblematic figure of the “yellow vests”. The procession advanced from the Place de Nation to the Bastille in the French capital.

A few tear gas canisters were thrown by police officers at the sides of the parade in mid-afternoon after projectiles were launched in their direction, an agency journalist noted. AFP. The police made several arrests. A branch of the Société Générale bank was also looted by masked men dressed in black near the centre.

Police had “real fears” about “the arrival of violent people like the blac blocs, “the ultra-yellow vests who would like to disrupt the demonstration”, according to security officials.

“Long live the social wave, the people are thirsty for justice,” read a sign near the Nation square. Another warned: “Retirement is good, offense is better.”

“The fights are gathering”

“It is good that we have a great popular force in the face of this government’s policy of social and ecological abuse,” said Mathilde Panot, the leader of the Deputies of Insubmissive France.

The demonstration was called by left-wing parties – Insubmissive France, supported by the Greens, Socialists and Communists – and supported by hundreds of associations seeking to maintain the tension created by the strike at TotalEnergies refineries.

The French energy giant on Friday announced a salary increase agreement (7% plus bonuses) with the two largest unions representing personnel at its four refineries in France. But the notoriously combative CGT union refused to accept it, demanding a 10% raise, and its members continue to maintain picket lines.

“You can see that this movement is starting to spread,” Congresswoman Mathilde Panot told radio France Info: “You can see it in the nuclear sector. Truck drivers announced a strike on Tuesday and many other sectors are starting to participate,” she added.

The main objective of the march is to draw attention to the plight of workers fighting the rising cost of living – inflation was 5.6% in September – and to criticize the lack of political action against climate change.

The magnitude of the protests and strikes in the coming months could influence the government’s ability to implement its controversial pension reform.

Emmanuel Macron, who was re-elected in April, wants to raise the retirement age, now 62, to put France on a par with other European countries. Unions and left-wing parties are directly opposed to this change.

Facebook
Twitter
Pinterest
WhatsApp
Previous article
Opinion – Ronaldo Lemos: Brazil is on the way to launch the digital real
Next article
39-year-old man arrested for defrauding elderly people – Convinced them to give him cards and pins