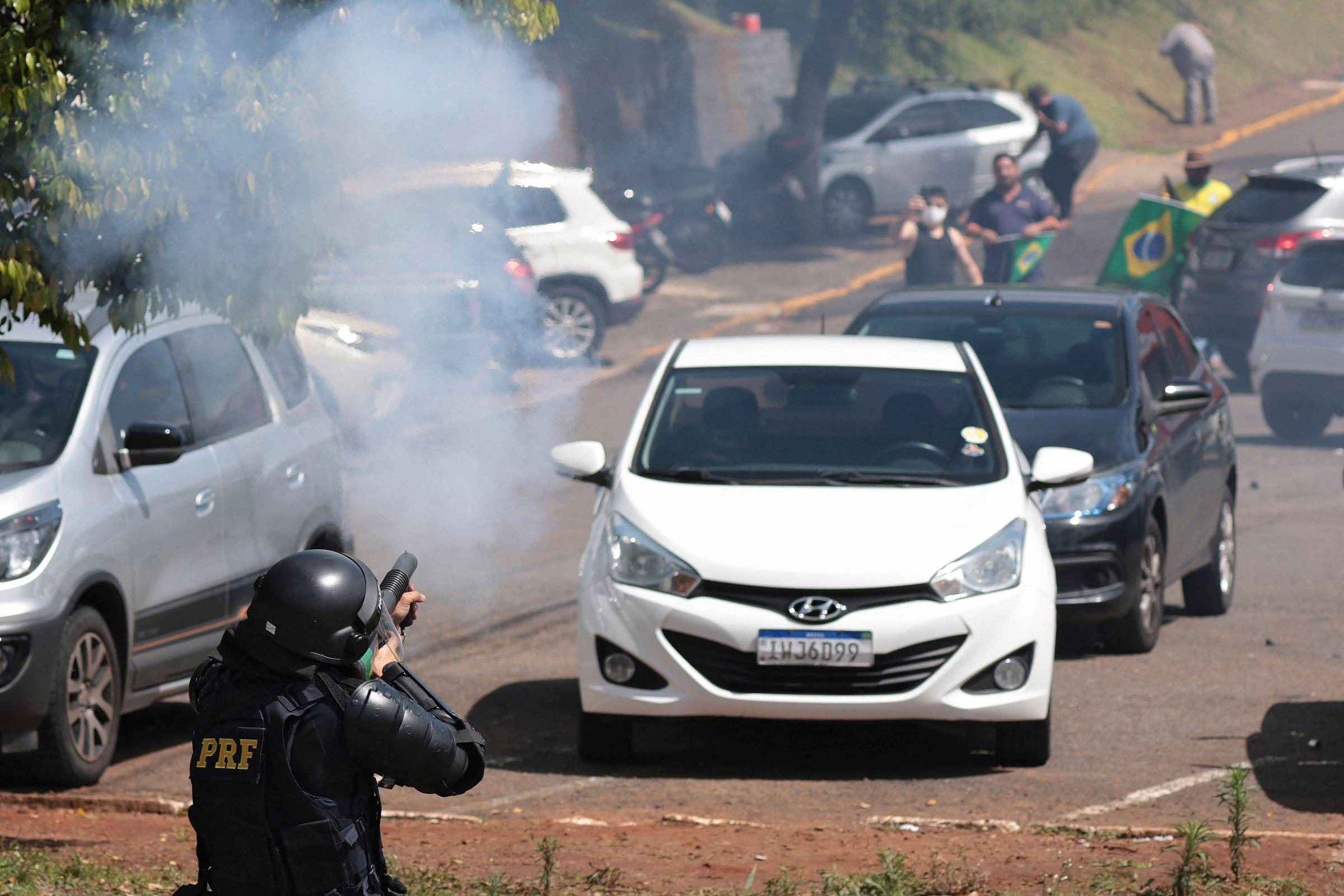 After Moraes’ order, police from at least 5 states begin to clear roads

After the decision of the Minister of the Federal Supreme Court (STF) Alexandre de Moraes this Tuesday (1st), governors and the military police of the states began to act in the clearance of highways blocked by protests of a coup nature.

“The military police of the states have full constitutional and legal attributions to act in the face of these illicit acts, regardless of where they occur, whether in public spaces and federal, state or municipal highways”, says the minister in the decision.

On the highways of Rio Grande do Sul, the day began with 17 highways blocked by Bolsonaristas, according to a report by the local PRF. On Monday the number reached 42. Supported by a decision of the STF, military police began to act to unblock the roads and the number is gradually decreasing.

On the BR-116 near Novo Hamburgo, in the metropolitan area of ​​Porto Alegre, the PRF gave up on negotiations and, in the face of protesters’ resistance, the Military Brigade riot police used tear gas bombs to disperse the group.

At 10 am, police escorted the sides of the highway to avoid further roadblocks. The stretch is still slow due to debris placed by protesters to interrupt the road.

On most highways, the unblocking has been negotiated between the PRF and the protesters are peacefully clearing the road. The Rio Grande do Sul PRF said today that it “is working to ensure clearance”. On Monday night, the Government of RS set up a crisis office for the situation.

In Porto Alegre, due to the fear of shortages and price increases, there has been an increase in demand for fuel since Monday and there are already stations without gasoline or limiting the capacity for each supply.

“About the illegal roadblocks that occur on the roads of RS, my order to the state security forces is to act and carry out the unblockings immediately, as indicated by the law”, wrote the state governor, Ranolfo Vieira Júnior (PSDB), in the Twitter.

On Twitter, Rodrigo Garcia, the governor of São Paulo who supported the reelection of Jair Bolsonaro (PL), said that the blockades on São Paulo’s highways are inadmissible, and that the Public Ministry and the state’s PM were called.

In Santa Catarina, a decision published in the early hours of Tuesday (1) authorized the use of security forces and establishes a fine of R$ 10,000 for protesters who fail to comply.

Judge Luciana Pelisser Gottardi Trentini, from the judiciary duty, responded to the request of the state government and, at dawn, ordered that state highways obstructed by protesters be unblocked.

The state governor, Carlos Moisés (Republicans), who has withdrawn from the president’s support group in recent years, said on Twitter that security forces are working to unblock all points of interdiction on the highways.

“All legal and necessary means will be used to guarantee the safety of people and the free movement of people and vehicles. Guarantee of the right to free expression must coexist with the guarantee of the population’s freedom to come and go, in compliance with basic and the provision of services to citizens”, he wrote.

According to information from the Santa Catarina PRF, since Monday night, when the first decisions were made to unlock the roads, 14 demonstration points were demobilized.

“This monetary fine is helping to convince the participants to demobilize. At some points, when we leave, the protesters come back and close again, and the PRF has to return to the place. SC’s PRF.

The expectation is that one of the most critical blocks, which takes place in Palhoça, in Greater Florianópolis, will be released this Tuesday morning.

In a friendly conversation with the leaders of the BR-101 blockade, Federal Highway Police agents asked the group to clear part of the road, but they were not answered.

The general atmosphere is tense, and the order for the use of force is expected to be carried out at any moment. The protesters reaffirm their will to continue with the blockade.

The group has been in the same place since Sunday night (30), in front of a Havan store, a chain of Bolsonarista businessman Luciano Hang, which has been working as a support point for the protesters. A supermarket chain also supports the group by distributing supplies.

In Palhoça, police gave an informal deadline until 1 pm for protesters to vacate the highway. In the dialogues, the PRFs have adopted a friendly tone and reinforced that the blockade is hindering the transport of perishable and emergency cargo.

One of the movement’s leaders, Amarildo dos Santos, reportedly committed to the agents to meet a new deadline. The police also said that if the deadline is not met, they will have to use force.

Amarildo is a veteran Army private investigator from Santa Catarina and, in 2021, organized caravans for demonstrations in Brasília. He is one of the leaders of the Yellow Green Brazil Movement, a union of more than 100 associations and unions linked to agribusiness and cargo transport entrepreneurs.

The re-elected governor of Minas Gerais, Romeu Zema (Novo), said that he has also requested the clearing of the roads occupied by protesters.

“I have already asked the security forces to take the necessary measures to clear any roads or roads that are blocked by demonstrations,” said the governor in a video posted on his Instagram.

“The election is over and now we have to guarantee everyone’s right to come and go, and also that the goods arrive where they need to be, so that there is no shortage. We are going to comply with the law,” said Zema, who supported the President Jair Bolsonaro (PL).

The Military Police of Minas Gerais stated in a note released earlier this Tuesday afternoon (1) that there are no total bans on state highways at this time. According to the corporation, the end of partial blocks is now under negotiation.

One of the partial bans, made by coup protesters supporting the defeated president in the race for reelection, Jair Bolsonaro (PL), takes place at MG-010, towards BH Airport, the main airport in the state, in Confins, in the metropolitan region of the capital.

The airport’s advisory said, however, that so far, there is no impact on the operation of the terminal.

In Roraima, the PRF said it complied with the decision of the STF and, earlier this morning, there were no blocking points by bolsonaristas coup plotters, like the one that existed on the ring road in Boa Vista and at two points on the BR-174, in Rorainópolis. In the late morning, a new blockade appeared at km 715 of the BR-174, in Pacaraima, on the border with Venezuela. The PRF stated that it was heading to the place to comply with the STF decision.