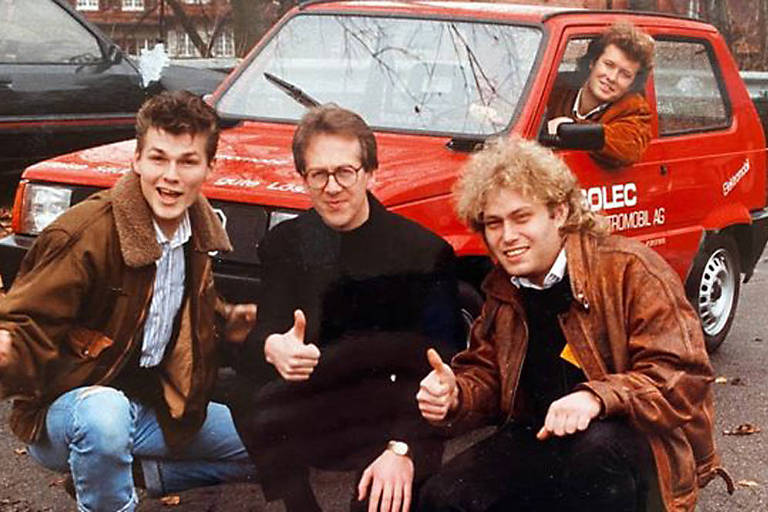 When it comes to electric cars, Norway is miles ahead of the UK. Much of this leadership is down to an unlikely collaboration between environmental activists and the Norwegian band A-ha.

In the 1980s, two activists worked as true beacons in the Nordic environmental movement, promoting electric vehicle technology, but they failed to capture the public’s attention.

Until they recruited the biggest rock band in the country to help spread the word.

It was the band A-ha, one of the most popular in the world at the time, with international hits such as Take on Me and Sun Always Shines on TV. They even recorded the theme song for the James Bond movie 007 – Marked for Die, in 1987.

Together, the activists and the group went to Bern, Switzerland, where they attended the Tour de Sol — a rally of solar-powered vehicles — in 1989. There, they saw a Fiat Panda car whose gasoline engine had been converted to electricity.

They imported a similar car and used the first modern electric vehicle on Norway’s roads, launching a campaign of civil disobedience. The idea was to show that it was necessary to develop an alternative to polluting fossil fuels.

They racked up fines for driving through tolls without paying, parking in prohibited places and refusing to pay vehicle taxes, arguing that the new form of sustainable transport should be free of these kinds of costs to make it more attractive.

The Fiat Panda’s rear seats were removed to create enough space to house the batteries needed to power the car, but its range was limited to just 45 km. And it took 48 hours to recharge.

The idea came from Professor Harald N. Rostvik, from the University of Stavanger, Norway. He says that, at the time, people just laughed at him.

“It was even difficult to communicate what we wanted because there was no word like ‘sustainability’.”

“The idea was to embarrass the government, until, just a year after we drove the car for the first time, they started implementing the best incentives in the world, as per our requirements,” he recalls.

According to Frederic Hauge, founder of the environmental NGO Fundação Bellona, ​​”before we imported the electric car together, people just focused on the problems.”

“It was one of the first debates largely focused on the solution,” he says. “It took a year to make way with that little Fiat Panda to [que surgissem] regulations in Norway.”

In fact, the campaign lasted about seven years before all the incentives were adopted.

In that time, the car was seized by the government and repossessed by supporters at least a dozen times, but they believed it was important for Norway to lead the way in carbon reduction in the travel industry.

Since the mid-1970s, Norway has been one of the richest oil producing countries in the world. The country has a sovereign wealth fund of almost 1 trillion pounds (about R$ 5.7 trillion) accumulated from the revenues from its oil fields, which will serve as a “pension fund” when they run out.

For A-ha member Magne Furuholmen, “our hands are stained by the oil that made us rich.”

“So I think we have a certain responsibility to come out ahead, lead the way,” he says.

“That cart paved the way for free parking for electric cars in the city, with charging stations, and for non-payment of tolls.”

In the first half of 2022, 78% of new cars sold in Norway were fully electric. The country aims to ban the sale of new petrol and diesel cars by 2025 — five years earlier than the UK. And they are optimistic about the future.

“Now, 33 years later, we are adults and we have children. We all have a responsibility to our own families, our country and the global community,” says Rostvik.

And Harket is also optimistic about the future.

“The world is only like this today because we kept it like this,” he says. “Because the pattern of how we do things, how we handle things, can change very quickly if we decide to change.”