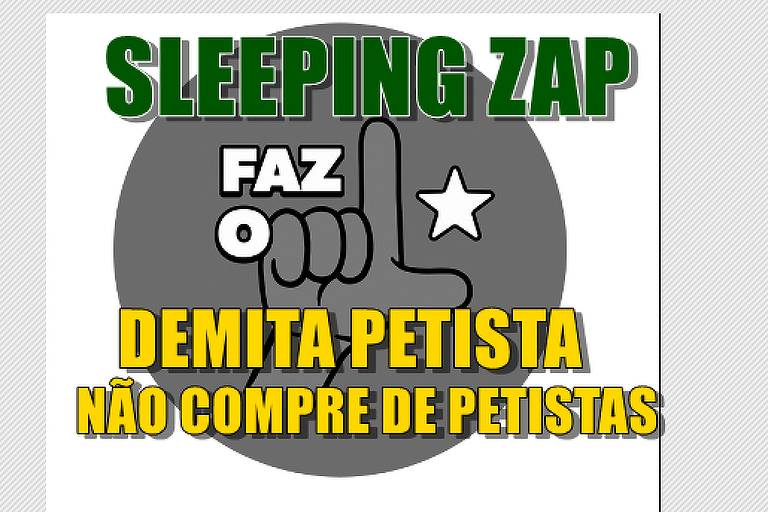 A worker who is fired because of his choice in this year’s elections can be compensated and even reinstated if he proves to have been the victim of a discriminatory dismissal.

For regional labor prosecutor Adriane Reis de Araújo, from Coordigualdade (coordinatorship for the promotion of equality at work), the threats and dismissals reported in recent days are a consequence of the explosion of cases of electoral harassment observed in the period that preceded the votes in the first and second rounds.

On Monday, the tag #DemitaUmPetista came to be among the most shared on the social network Twitter. The Bolsonarista call is part of a series of actions mobilized by supporters of President Jair Bolsonaro (PL) against the results of the polls.

THE Sheet showed in a report this Friday (4th) an account of a worker fired after having participated in a celebration for the victory of candidate Luiz Inácio Lula da Silva (PT). The boss, who often shared videos of Bolsonaro in the WhatsApp group she kept with the employees, would not have approved of the worker’s choice.

The MPT (Ministry of Labor) started this Friday an awareness campaign of what can be classified as discriminatory. According to the prosecutor, the MPT has already received some specific complaints of dismissals motivated by electoral issues.

Complaints also arrived from companies that would be directing their employees to demonstrations of a coup nature, which is illegal. If the company wants to dismiss its employees on the day of an act, for example, it can, but cannot force them to participate in any actions.

Although the movement on Twitter is aimed at workers identified as PT, discriminatory dismissals or cases of electoral harassment can be understood in this way in relation to all party preferences.

Therefore, a Bolsonarista voter who understands that he was fired for this choice also has the right to demand compensation.

Lawyer José Carlos Whale, from the Veirano Advogados office, understands that the mere use of the tag on social networks is already an indication of a threat to a political group and, therefore, is illegal conduct.

“Political conviction has nothing to do with employment conditions, which is very different from having inappropriate conduct. [empregado] does in his private life and especially exercising a civil right is his only responsibility”, he says.

How to prove discrimination

The employee who considers going to the Labor Court against the company must gather as much evidence as possible. For those who intend to submit a complaint to the MPT, gathering evidence can also be useful.

According to the labor prosecutor, a post or the use of a hashtag, for example, can be used as evidence. Adriane Reis also says that publications on company profiles may indicate that discriminatory attitudes were adopted.

Workers can sue the companies individually and the MPT does not rule out collective actions. “There is an offense for the whole of society”, says the prosecutor

Until this Friday, the Public Ministry of Labor received 2,749 complaints against 2,093 companies and public institutions across the country related to electoral harassment. The Southeast region registered 1,075 complaints, and the South, 819. According to the Labor MP, investigations are continuing.

Prosecutors have been trying to reach out-of-court settlements, in which employers release retractions and pledge not to try to interfere with their employees’ free-voting rights.

In all, TACs (Terms of Conduct Adjustment) were signed with 220 companies and 66 public civil actions were initiated.

Facebook
Twitter
Pinterest
WhatsApp
Previous article
Brazilian is elected to the Hague Court, the main legal body of the UN
Next article
Rearmament takes world ‘to the edge of a precipice’, says pope in Bahrain