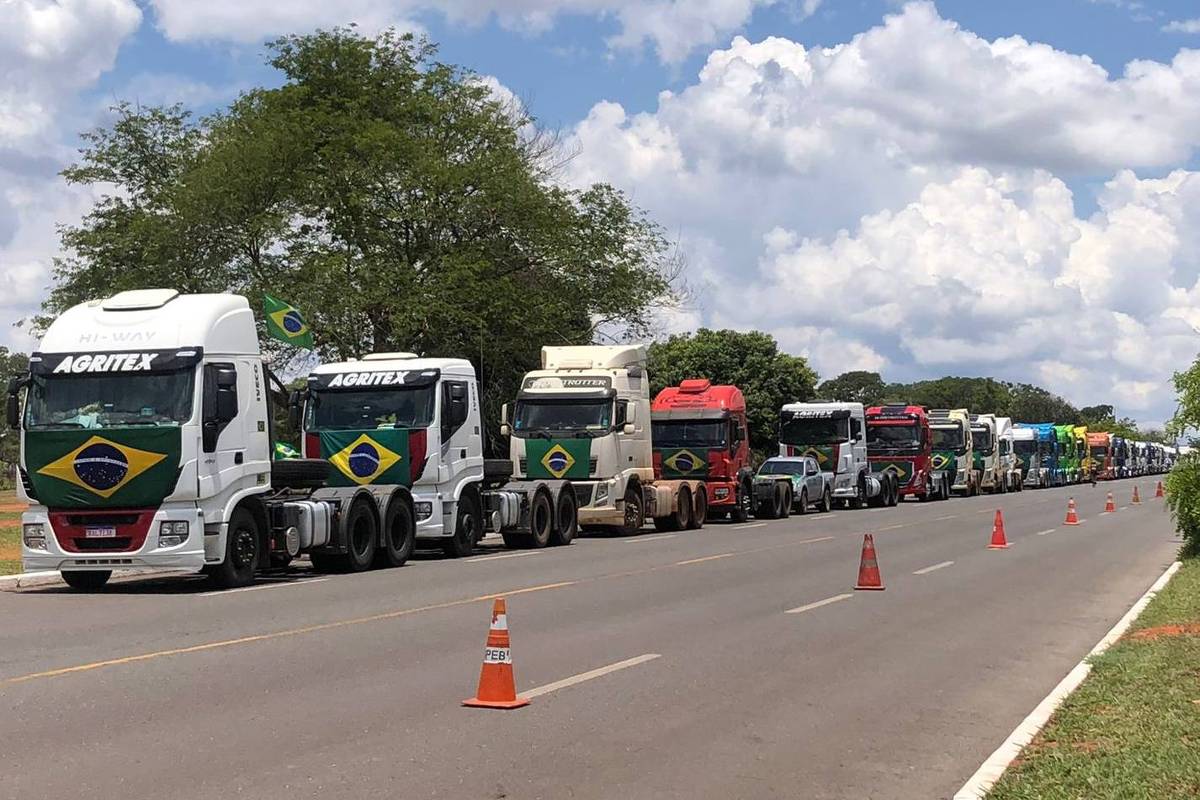 Businessmen from different states financed the sending of trucks to bolster the anti-democratic protest in front of the army’s headquarters in Brasília, where supporters of President Jair Bolsonaro (PL) are calling for the intervention of the Armed Forces against the results of the elections.

More than 70 trucks with the Brazilian flag arrived in the federal capital between Sunday (6) and Monday (7). Drivers told the report that 23 of them left Água Boa, in Mato Grosso, together, in an action organized by businessmen from the municipality.

Twelve trucks displayed the name of Agritex on Monday, a reseller of agricultural machinery, parts and equipment that operates in seven cities. On Sunday, the company itself shared videos on Instagram of the trucks arriving in the protest region.

“The road warriors arrived in Brasilia”, read the caption of one of them. “Team Agritex making its presence felt in Brasília. Proud to be part of this company”, stated another. “The agro showing its strength and importance.”

Another seven vehicles parked near the headquarters on Monday showed the logo of Grupo Comelli, from Rio Verde, Goiás. According to the website, the company specialized in biomass processing also operates in Minas Gerais and Mato Grosso.

On their Instagram profile, the group shared a photo of five trucks side by side with the Brazilian flag and the location “Army headquarters”. “Proud to be Brazilian,” read the caption.

The trucks that help inflate the Brasilia act are parked in a row near the camp set up in the region. Traffic on the street was blocked by the Army. The plates indicate that the vehicles left at least four states: Mato Grosso, Goiás, Bahia and Santa Catarina.

Truck drivers privately stated to the Sheet who came to the federal capital by decision of the bosses, and were instructed to remain in the city until further notice. Some stated that businessmen asked who would like to participate in the act in Brasília, while others said they were only informed of the decision.

The employees also said that they have a formal contract and that, therefore, it makes no difference whether they are working or the trucks are stopped. They also affirmed that the expenses with food, fuel for the trip and transport in Brasilia will be paid by the employers. Some came with their wives.

Officials at one of the companies said the boss authorized the group to financially help other protesters encamped. THE Sheet identified two large food stalls serving free lunch to truck drivers. In one of them, this Monday, there was a barbecue.

The report was unable to contact Agritex until the publication of this text. The company was contacted by phone on Monday and Tuesday (8), but no one answered. THE Sheet also sent an email, but there was no response. The Comelli Group said, by telephone, that it would not comment.

This Tuesday, Attorneys General of the Public Prosecutor’s Offices of São Paulo, Santa Catarina and Espírito Santo informed the Minister of the Federal Supreme Court (STF) Alexandre de Moraes that the ongoing antidemocratic acts are led and organized by businessmen.

According to them, the members are part of “a large criminal organization with predefined functions” and interstate operations. One of the objectives of the Public Ministry is to map the financial flow that is supporting the roadblocks and highways.

On Monday, the minister ordered the police to inform the STF within 48 hours of the identification of all vehicles and trucks that participated in both the roadblocks and the demonstrations in front of the Armed Forces barracks.

Moraes also demanded the identification of “leaders, organizers and/or financiers of the aforementioned anti-democratic acts”, and information on the “measures carried out” by the PRF (Federal Highway Police), PF (Federal Police), military and civilian police.

Experts say protests calling for military intervention attack the Constitution itself and are not protected by the right to freedom of expression. The punishment for each conduct must be assessed individually.

The Army asked the Federal District government for help to maintain “security” and “public order” in the area. The Planalto Military Command requested the dispatch of ambulances, employees to clean and control street vendors, police and trailers.

In response to a question from the Sheetthe Army informed that the protesters “are peacefully meeting in front of the headquarters” and that the objective is not to remove them from the place, but to reinforce the “security of these Brazilians”.

“The official letter does not deal with the removal of protesters who are peacefully in front of the Army Headquarters. The objective of the document is to reinforce, together with other organs of the Federal District, the activities of traffic control and tents, cleaning and safety of these Brazilians.”

Facebook
Twitter
Pinterest
WhatsApp
Previous article
Mid-term elections in the USA: Thriller at the polls – Fierce battles between Democrats and Republicans
Next article
CAC 40: No red wave in the House of Representatives