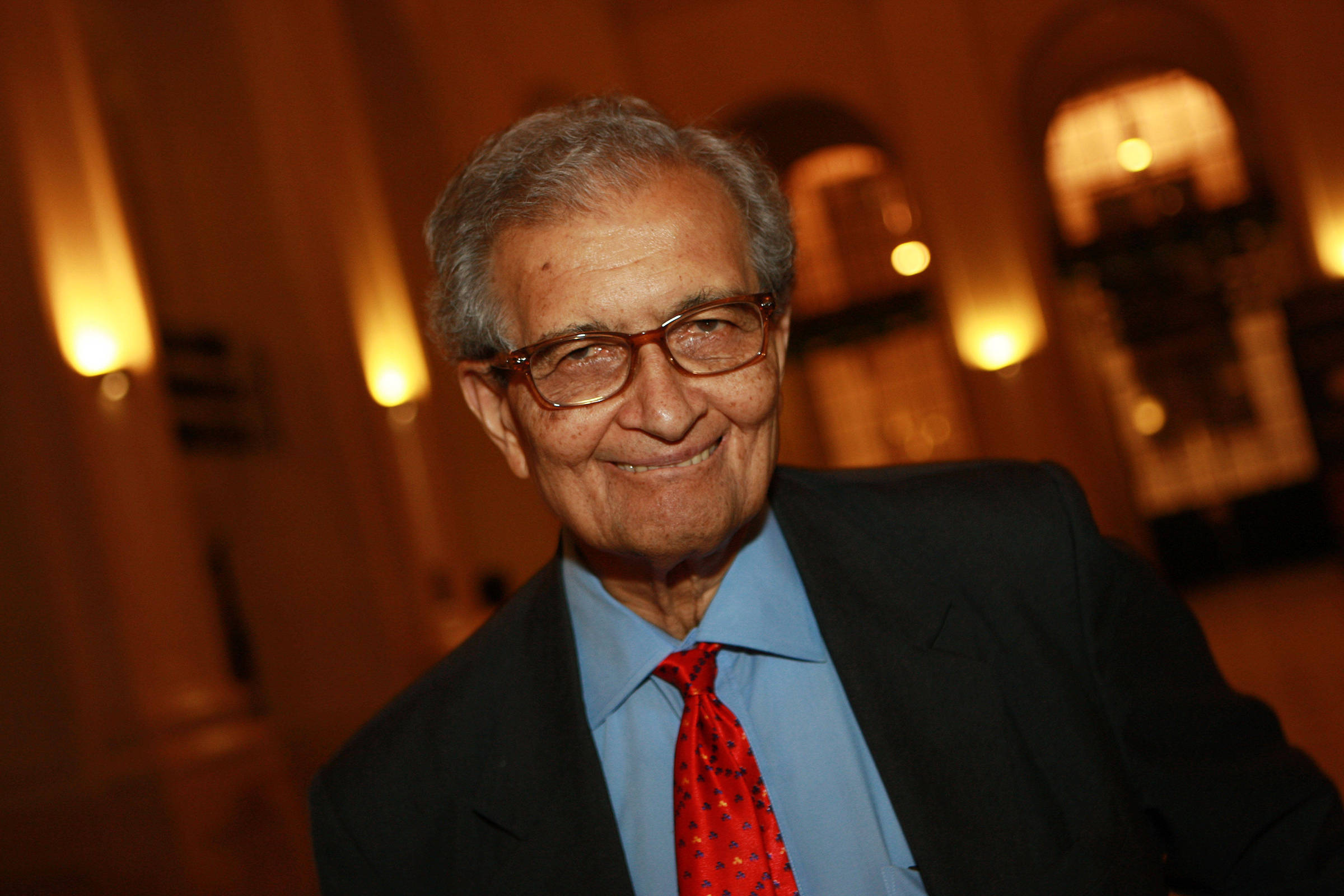 Economy is secondary, what matters is people, says Amartya Sen

Winner of the Nobel Prize in Economics in 1998, Indian thinker Amartya Sen prefers to hold back on economic discussions. According to him, the topic already receives too much attention—”practically all the time”—and there are more important issues, such as freedom and people.

In an interview with Sheet, Sen claims to be concerned about threats to human life due to political intolerance, which is spreading in the world. “There are a lot of things happening that are disruptive. Whether or not they are economically disruptive is a secondary question.”

The Indian thinker, who gained renown for his studies on hunger and for defending development with freedom, respect for individuals and social well-being, says he is following the Brazilian reality to a certain extent.

According to him, Brazil has a lot to teach the rest of the world and, like any country, it has the capacity to grow while fighting inequalities.

Sen recently published his memoir, released in Brazil by Companhia das Letras under the title “Uma Casa no Mundo”. In it, the economist details how his personal experiences influenced his work in favor of improving the human condition.

The interview was done by video call, before the second round of Brazil’s elections.

At the beginning of the book, Mr. talk about the situation in Burma [atual Mianmar] and takes the opportunity to reflect on the political intolerance that has been taking place around the world. Mr. Do you think political intolerance and authoritarian regimes can pose a threat to fair economic development? I don’t know about economic development. It is certainly a threat to our lives. Economics is often overemphasized. Not everything needs to be judged by its economic success or failure.

I think our lives are seriously affected right now, whether it’s thinking about what’s happening in Ukraine, what’s maybe happening in China, or what’s happening within the confines of the Indian subcontinent as well. There are a lot of things going on that are disturbing. Whether or not they are economically disruptive is a secondary question.

Mr. talk about the relationship between democracy and the welfare economy🇧🇷 How important is democracy if we really want to build an economic model that addresses social justice? Democracy is very important because we could not listen to each other without democracy. We could not pay attention to what different people in one country or in different countries are wanting.

The absence of democracy, which we unfortunately have today to a great extent in many parts of the world, leaves us in silence with each other. Not articulate, not open to conversation. I think this could be a radical failure of human life. I would go in that direction. The issue of economic failure seems to me secondary.

But when we talk about economic models, what should be at the heart of a good model? You’re going back to the economy [risos]🇧🇷 I think the economic model can take many different forms. The main thing is the extent to which there is justice, the extent to which there is opportunity for different people to participate in economic work that involves all of us. Economic cooperation is certainly important.

I was told that the Republicans will win the election and they will defeat the Democrats in the US. Because? We’re told it’s because the Republicans have a better economy. All the while, there is a huge focus on economics. Sometimes it makes sense, but often it doesn’t.

Mr. have you been following the situation in Brazil? How do you see the current situation in the country? To a certain extent, yes, because Brazil is a very large part of the world. It has also been a very important country whose experience has been important.

These are big problems, whether they are in Brazil, the United States, India or China. These are inescapably important questions.

Brazil is a country with deep slavery roots. How to fight inequality in its economic and symbolic dimensions? I’m not sure going to the symbolic side is extremely productive.

I think Brazil has had a history of slavery in which good studies have been written indicating how slavery was eliminated, how it happened, and how this removal of a basic inequality helps different groups of people, poor and rich, to share their efforts to build a good, solid and strong economic structure.

I think, to a large extent, Brazil has been successful in this and therefore it is something that the world can learn from Brazil, just as Brazil can also learn from what has happened in other parts of the world. I think there’s a little understanding of each other, which is central, but Brazil has more to teach, as well as learning from the rest of the world.

What would be the most important thing to learn in Brazil from the rest of the world? [Risos]🇧🇷 I don’t answer “what’s more important” questions. Many things are important and should not be overlooked. By just saying this is important or that isn’t, we end up creating a divide, which doesn’t help much in understanding human society and how people interact with one another.

Mr. has an important work on hunger, and Brazil is an example of a country that produces a lot of food, but still live with hunger🇧🇷 This sounds contradictory, how to explain this situation? Well, you know that Brazil is a very successful country in many ways. Its economic development has been strong for some decades now. But along with this success, it is possible that many people lack a livelihood, and a good livelihood. When this happens, you can be deprived and even hungry.

Can this be avoided? Yes, but we have to look at what makes people deprived, and how we can reduce deprivation and turn that into a well-shared society.

I think Brazil has had some good experiences, and we have reason to appreciate what Brazil has done. Brazil is not alone in this, there have been achievements in other countries as well.

There is often a very strong argument for this because there are a lot of poor people, even in a country that is quite rich. When that happens, we have to see how these transfers can be carried out more efficiently and how to avoid inequalities that can be counterproductive for society at large.

Not every transfer is a success, but there are successful economic transfers.

The idea is that we can do this for each other, and when that happens, there could be a benefit that extends to everyone and not just a few people.

I would say, yes, I think sharing is a concern that people should emphasize. I’m a big believer in the culture of sharing, even though sharing can take different forms.

like mr. see the environmental discussion and how important is this when we talk about social justice and fighting inequalities? Do you think this is being addressed well today? For every system we can think of, there tends to be another system that avoids the shortcomings and emphasizes the successes. Can every system be improved in some way? Yes, in general. I think there have been performance successes in different countries around the world.

I tend to be pretty optimistic in general. Not because I think everything will be a success, but we can succeed in a situation that seems pretty hopeless.

I think it’s very important not to lose our ability to learn from the different experiences of society. Brazil will always be an important example from which the world would learn.

Born in Santiniketan, present-day Bangladesh, in 1933, he received the Nobel Prize in Economics in 1998 for his work on social welfare economics. A professor at Harvard University, he is the author of several books, including “Development as Liberty” and “The Idea of ​​Justice”, both published by Companhia das Letras.

A HOUSE IN THE WORLD

Facebook
Twitter
Pinterest
WhatsApp
Previous article
Cássia Kis: Neighbors repudiate the presence of the actress, who is increasingly isolated
Next article
Holy See: Investigation into sexual abuse of a minor by a French cardinal